This timeline is part of Patricia Park’s article “Madame Butterfly Effect: Tracing the History of a Fetish.”

From the 19th century on, the Madame Butterfly archetype has continued to flap its wings. Below is just a sampling of its pop-culture influence for more than 100 years. 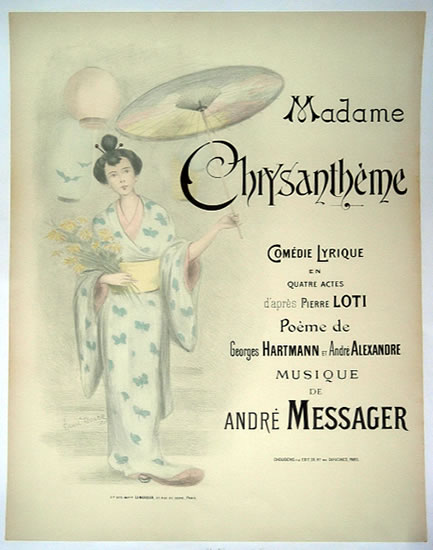 Madame Chrysanthème (novel, 1887)
Pierre Loti starts it all with his diary-novel about a French naval officer stationed in Japan whose sole goal is to find a doll-like Japanese wife to amuse him, only to unceremoniously leave her when it’s time to return to Europe. How does one say “icky” and “pig” in French?

Madame Butterfly (short story, 1898)
Puccini would base his opera on this short story by American author John Luther Long, which Long in turn based on Loti’s novel. Long’s character Cho-Cho (which means “butterfly” in Japanese…sigh) is left with a son by the American officer Pinkerton. The ambiguous ending in this version lets Cho-Cho-San live on with her son in Japan after attempting suicide.

Madama Butterfly (opera, 1904)
Giacomo Puccini brings Mme. Butterfly to the spotlight with this opera. Puccini solidifies the sacrificial-butterfly narrative with a Japanese bride so forlorn without Pinkerton, her white hero, that she kills herself so Pinkerton can take his son home to America with his white wife.

Harakiri (film, 1919)
German director Fritz Lang’s adaptation of the story gets right to the point—the title is the Japanese act of ritual suicide.

The Toll of the Sea (film, 1922)
Although this film featured Chinese-American actress Anna May Wong in her first starring role, there’s little else to applaud. Set in China, Wong plays not “Butterfly,” but “Lotus Flower” (collective groan). She rescues an American visitor from drowning and he reciprocates by marrying her, then leaving her in China with his son while he—well, you know how the story goes by now. In the end, Lotus Flower drowns herself in the same ocean where she found the dude (double groan). 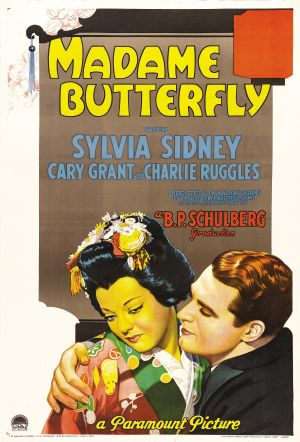 Fair use via Wikipedia

Madame Butterfly (film, 1932)
Cary Grant stars as Pinkerton in this film adaptation. Cio-Cio-San is played by white American actor Sylvia Sidney and in one film poster her skin appears so yellow it radiates a lemony hue onto Grant’s face as he embraces her. Classy move, old Hollywood.

M. Butterfly (play, 1988)
David Henry Hwang’s play, loosely based on true events, subverts the traditional Puccini narrative by presenting French officer René Gallimard as so lost in his idealized fetish that he is unable and unwilling to see that his beautiful Butterfly—a Beijing opera singer—is actually (spoiler alert!) a male Chinese spy. Hwang won a Tony Award for Best Play that year, the first Asian American to do so. The play was turned into a 1993 film by David Cronenberg.

Miss Saigon (musical, 1989)
Japan is so 19th century—time to update the narrative with a completely different Asian country! So thought Claude-Michel Schönberg and Alain Boublil, who wrote this musical reframing the Pinkerton-Butterfly coupling for an American soldier and a Vietnamese prostitute with a heart of gold, sending the narrative into new levels of fucked-up neocolonialism.

Pinkerton (album, 1996)
With its referential cover art and title, direct references to Cio-Cio-San, pining for a Japanese fangirl “across the sea,” and a final track entitled “Butterfly,” Weezer’s second album is more or less a shameless love letter to a fetish.

Big Bad Chinese Mama (website, 2000)
Kristina Wong creates an “internet performance installation,” Big Bad Chinese Mama, as a mock mail-order bride website. But rather than finding an ideal Asian mate, visitors will instead encounter profiles like Madame Bootiefly, who sits on a toilet doodling graffiti on the wall and is in search of someone “hairy, racist, unable to cope with a nonsubmissive female, and plagued with the socially defunctness of fetishism.” Bootiefly waits for no one, cries for no one, and certainly, dies for no one.

Want the best of Bitch in your inbox? Sign up for our free weekly reader!