15 Female-Fronted Bands to Love at SXSW 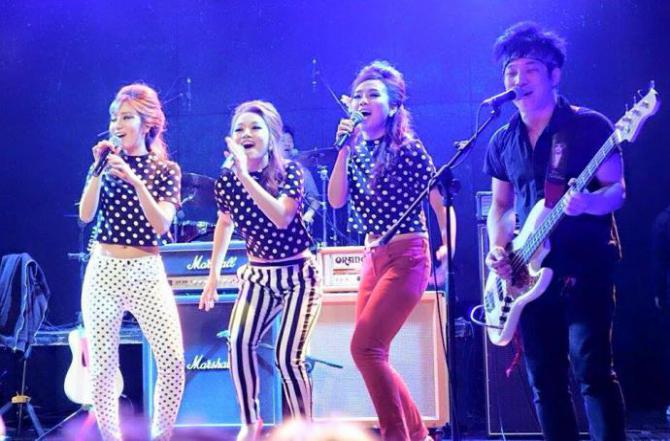 The SXSW music festival has taken over Austin, Texas! I’m here to sort through the more than 2,000 bands that will play around town before Sunday and pick out new feminist music to bring us into spring. Here’s my list of favorite female-fronted bands from the festival.

It’s easy to think of SXSW as the biggest white-dudes-from-Brooklyn music fest on the planet—it is. But it ALSO has a huge and vital international music component, and one name that rose to the top as I listened my way through featured artists was Dominican electronica artist Carolina Camacho. Listen in particular for the interplay between her high, unnerving vocals and glittering, slippery synth on “Ninfa de Aguas.”

Last year, SXSW had a distinct dearth of female hip-hop acts. After being knocked off my feet by genderqueer performer Angel Haze two years ago, I’ve felt the lack of quality feminist hip-hop at SXSW distinctly. This year is looking to change that, starting with London rapper Little Simz.  What stands out about Simz immediately is her ability to self-reflect. Instead of stroking her own ego for the sake of peacocking, she grapples sincerely with what it’s taken for her to believe in herself and her talent. In “Time Capsule,” linked below, she talks to her younger self encouragingly, promising to always take her own advice.  All that perspective, plus intense, changing beats bolstering her forceful voice? PLUS she’s only 20? Everything is yes.

I wrote about lo-fi Seattle feminist rockers Chastity Belt for NPR this month, and they’re one of the acts I’m most excited about at this year’s festival. Chastity Belt sings about feminism like it’s obvious. That nonchalance and ease of political consciousness is exactly what I’ve been missing, and it’s expressed nowhere better than in “Cool Slut,” a sex-positive ode to taking off your clothes when you wanna. Here they are playing it at Sasquatch last year.

Modeled on 1950s American girl groups, South Korean trio The Barberettes could easily have tipped over into gimmicky, but they’re sincere artists. “When It’s Rainin’“ was the first track I heard and I love how it turns on a dime from doo-wop harmonizing to rockabilly swing to a gospel-tinged breakdown. Perfect for clapping and stomping away sore feet and minimal sleep.

Last year, I highlighted the sultry R&B of denitia and sene, and their musical inheritor this year sounds like it might be Lolawolf, a New York three-piece started by Zoe Kravitz. The trio started making music in their bedrooms and that intimacy shows through. They’re bouncy and fun one minute, intense and sensual in the next. Excited to see where they go next. Here’s “Bitch,” because they obviously love us.

The second London rapper on my list this year is poet, author and emcee Kate Tempest. She’s been commissioned by the Royal Shakespeare Company of London to create an epic (in the traditional sense) spoken word poem, and her debut novel comes out this spring. Color me intrigued.  Here is her latest single, “The Beigeness.”

The anthem of this year’s SXSW for me is “Colors,” the chemically irresistible feminist pop explosion from Genevieve. You will have to drag me away from wherever I hear this song kicking and screaming.

Leaf is a 19-year-old rapper, singer, and producer whose first single “Drama” operates from a place of rage and frustration with the way women target and hurt each other. I’m interested in whether the anger and energy of this song is a theme in the rest of her music. Compelling stuff, either way. Here’s “Drama.”

It’s about time we had some folk on this list, lest we forget where South By takes place. Ruby Jane is a violin prodigy turned singer-songwriter who makes sweet, folk-pop. She was the youngest performer ever invited to the Grand Ole Opry in Nashville (at age nine), and now lives here in Austin and tours with the likes of Willie Nelson and Sheryl Crow. This is the stuff secret-shows-under-the-Congress-Avenue-Bridge dreams were made of.

I’m late to the Torres party, but better late than never. She’s got the kind of husky, deep voice that silences a room, and her dark lyrics and stark guitar playing keep it quiet. She’s a singer-songwriter with grit in her throat, a plugged-in guitar, and a beast of a story to tell in every song.

Wardell is a sister and brother duo from Los Angeles who make mellow indie pop that reminds me a little of Kate Bush plus cutesy keyboard and beachy guitar. Breezy pop is my palate cleanser of choice during the festival, and I hope wherever they play has open doors and cold beer at the ready. Sway along to “Funny Thing,” below!

I was already a fan of the steamy, dreamy electronic music made by Russian producer Shura, and THEN I saw the makeout-pocalypse of her video “Touch,” and now I’m going to this show mostly for the impromptu kissing frenzy we’ll surely all be driven to in the audience. Right?

More than 2,000 bands come to town for SXSW, but I like to keep it close to home as often as possible during the festival. In their lead single “Make Some Room,” Houston soul collective The Suffers tap the same well as Aretha covering “Respect” and Beyonce in heels in the kitchen in “Countdown.” The song is made all the more potent by frontwoman Kam Franklin’s emotive vocals. Catch me in the corner, Having A Moment during their set.

Producer Lauren Abedini, stage name Kittens, doesn’t perform her own vocals, but her mixes are thick, complex, and technically seamless. The sight of a woman at the turntables will be a welcome reprieve from the crowded, often aggressively male club scene that takes over the late-night shows at SXSW.

What about Prinze George!!! They are female fronted and they have a kick ass lady drummer!

Don't forget Ibeyi, they are amazing and have a really fantastic sound!

Great Article, I have to check some of these out!

I just want to add a shout out to a local favorite - The Snaz from Brattleboro, VT. I'm no good a describing music - I guess I'd put it somewhere in the alt-rock area. When they made their first splash in our little valley a couple years ago, their oldest member was 16. Now, at the advanced age of 18 or 19, they're off to the big city. Definitely worth a listen.