What happens when states contract with private, for-profit companies to both run their prisons and provide prison health care? Carol Lester, a 73-year-old grandmother, found out shortly after arriving at the New Mexico Women’s Correctional Facility in Grants.

According to a lawsuit Lester recently filed against the private companies that run both the prison and provide medical care, Lester arrived in December 2010 after being sentenced to three years imprisonment for embezzling from her employer to feed a gambling addiction. During her medical screening, staff noted that Lester had thyroid cancer and required the synthetic hormone Levoythyroxin each day. The screening also revealed that Lester did not use illegal drugs or have a history of illegal drug use.

Lester had brought a month’s supply of her prescription medications, which she gave to the intake staff. However, prison medical staff prescribed new medications, which caused diarrhea and vomiting. In response, staff prescribed her Zantac to treat her stomach problems. Lester’s condition did not improve and she began having fainting spells—Zantac is also known to cause false positives for methamphetamine

Luckily, Lester had family who wrote letters to the prison, the state Department of Corrections, and state legislators complaining of the prison’s failure to provide proper medical care. In September 2011, in response to these letters, a delegation of legislators visited the prison to talk with Lester and other women about their medical concerns.

Shortly after, the prison gave Lester a drug test. Lester, who had been prescribed Zantac by the prison, tested positive for methamphetamine. She was placed in solitary confinement for over a month, where she was still not given her prescribed medications.

Sadly, Lester’s story is one of many stark examples of what happens when either prisons or prison medical care is contracted to a for-profit corporation. The prison in Grants is run by the Corrections Corporation of America (CCA), a thirty-year-old private prison corporation. CCA contracts with state and county governments (as well as immigration and customs enforcement) to house their prisoners. In many cases, these contracts include lock-up quotas—guarantee that states will either provide a certain number of prisoners or pay for their empty beds. The contract for the New Mexico Women’s Correctional Facility includes a 95 percent occupancy quota.

CCA has a long history of medical indifference. In 1988, it was hit with its first major lawsuit for failing to provide adequate medical care to pregnant 23-year-old Rosalind Bradford, who was incarcerated in a CCA prison in Tennessee. According to a shift supervisor, Bradford suffered for an agonizing twelve hours before staff agreed to transport her to a hospital. There, she died from pregnancy complications. In his deposition, the shift supervisor said, “Rosalind Bradford died out there, in my opinion, of criminal neglect.” According to advocacy group Grassroots Leadership, CCA agreed to pay $100,000 to settle a suit filed by Bradford’s family.

Between Bradford’s death and Lester’s lawsuit lie a series of similar incidents in which gross medical neglect has led to death in CCA-run prisons. But in Lester’s case, there’s yet another private corporation involved.

It’s not just this one company that’s a problem. CCA works in tandem with Corizon, a private, for-profit corporation that contracts with prisons and jails to provide health care. According to their site, Corizon now runs health care for 500 jails and prisons across 29 states, covering health care for over 400,000 people (including Grandma Lester in Arizona). But having a for-profit corporation manage prison health care is dicey at best. At worst, it leads to deaths that might have been prevented if saving lives, rather than cutting costs, were the goal. This past January, Arizona contracted with Corizon to provide medical care throughout its prison system. According to a damning 2013 report from the American Friends Service Committee, medical spending in prisons dropped by $30 million. Staffing levels also dropped. The number of prisoner deaths, however, increased.

In September 2013, Corizon abruptly cancelled its contract with Kentucky’s Metro Corrections jail after outside investigations into the deaths of seven prisoners in 2012 arose and they were hit with a slew of lawsuits over the poor quality of care. Those suits are just several of the 660 times that Corizon has been sued within the last five years. Nearly half of those cases remain open. Of those that are closed, one in four ended with confidential settlements. According to the ACLU, Corizon nurse Diane Jackson has said, “We save money by skipping the ambulance and taking prisoners directly to the morgue.”

Lester added to that number, filing her own suit late last month against Corizon and CCA for denying her medical care and placing her in solitary confinement for over a month.

Given these stories, Lester is lucky to have lived through her lack of medical care. But her story raises some broader concerns about what happens when we turn incarceration into a for-profit enterprise.

Photo of a prison block is from the New Mexico Corrections Department.

the ACLU withdrew their case / and left the women hanging.

I was a therapist at NMWCF for almost a year in 2012. During my time there I witnessed more than several atrocities with regards to inmate treatment. I met with the NM state secretary to turn in proof of women being housed in segregation for years and denied there basic rights. While I was there I learned that inmates were not rehabilitated but rather taught that criminal behavior is acceptable. Many than more staff members there were harassing, abusing and sleeping with inmates without consequences despite the warden being made aware of staff criminal behaviors. Medical and mental Heath care were substandard to say the least. It seemed to me that the goal at NMWCF was to keep Em coming back as when the program I started was working I was transferred out of seg. I am still haunted by the treatment of my fellow women.

Relevant: A Look at Feminist Forms of Justice That Don’t Involve the Police 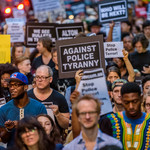 by Kristian Williams
Recognizing the limits of the criminal legal system, for decades women have organizing to defend themselves and keep each other safe.