The general consensus at the end of Parks and Recreation last season (and by general consensus I mean what most people said to me when I asked them about it, and how I myself felt) was that the show was a sometimes funny, sometimes not, could be better Office knockoff (which was itself a knockoff). Sure, there were funny parts, and Amy Poehler was just as crushworthy as ever, but it just wasn’t worth writing home about. Well, times have changed.

It’s a new season for Parks and Recreation, and if you haven’t been tuning in yet you are missing out on a giant feminist treat: Deputy Director Leslie Knope. Knope, played by Poehler, has really found her feminist (and hilarious) stride this season, and it is awesome. Check out this clip from last week’s episode, wherein Knope judged a local beauty pageant and tried, in vain, to champion a “not hot” candidate:

This episode, “Beauty Pageant,” was chocked full of awesome feminism, and in a way that was never preachy and did nothing to take away from the comedy (which should not be surprising, but there are a lot of haters out there who still think that feminism just isn’t funny). For example, Knope created a special scorecard for the beauty pageant that included categories like “Knowledge of Herstory” and “Naomi Wolf Factor.” Amazing. Also, when a local police officer asked her on a date, Leslie Knope hesitated because he was unable to recognize that the framed photo in her office was of Madeleine Albright. (He redeemed himself by studying up on women in government – how’s that for romance?)

Leslie Knope is a bit of a dork, sure, but that only makes her character better. She is a rare breed in prime time television, a female comedic lead who is openly feminist, career-focused, kind, smart, optimistic, and multidimensional. She is not the butt of jokes, even though you have to laugh at her a little bit sometimes. (How awesome was the “Pawnee Zoo” episode where she DJed at that gay club? Priceless.) Sure, the same could be said for Liz Lemon, Tina Fey’s character in 30 Rock (who is awesome), but Knope is far less cynical and self deprecating. While Lemon jokes about being too fat or ugly or nerdy to find dates, Knope gleefully pours sugar in her mocha and obviously feels great about herself.

So far this season, it seems that every episode has allowed Leslie Knope to be a little more feminist and a lot more kickass. Some more highlights from the past few episodes include her officiating a gay penguin wedding ceremony, her rapping the entire song “Parents Just Don’t Understand” in front of her coworkers, and her being a great friend to Ann (played by Rashida Jones) when a man Leslie likes wants to go out with Ann instead. See? No frenemies here.

What do you think? Have you been tuning in to Parks and Recreation this season? Is Leslie Knope worth applauding, or am I just blinded by Poehler love?

I love this! I feel like the only person in the world who actually watches and really likes this show.

Oh great, now I'm hooked! I had heard of the show, but I hadn't seen any clips until now. It is amazing. Is it just me or does it seem like there are more TV shows that are actually worth watching recently?

I think you're absolutely right, Kate! A lot of my time lately has been spent watching high quality television. I'm glad you like Parks and Rec! It's so good now!

She should be the boss. It angers me that she's not. Ron is and he is continually talking about how it's great to be Knope's boss because she does everything and he gets to sit back and relax. 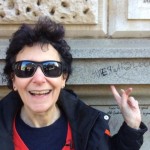