A Feminist Father as a Feminist President | Bitch Media

A Feminist Father as a Feminist President

Ms. magazine's inaugural issue has a picture of Barack Obama with a "This is what a feminist looks like," tshirt.

(With all due respect, I'm *really* tired of that shirt.)

Six days before his inaugural address, he writes a letter to Sasha and Malia, his daughters, and shares with the world his love, vision, and purpose.

These two images of the president-elect are intriguing and have sparked all kinds of talk on the feminist blogosphere about Obama's identity as a feminist which, he claimed, he is.

The question as to whether Obama is a feminist really doesn't resonate with me.  What matters more is what he is going TO DO once his position is secured on the 20th and how he will work to better the situation for women, not only in the United States, but also in the world.  The United States presidency is a position to greatly impact legislation for reproductive health, education, and social services.

On a less political note, if I were to answer whether Obama is a feminist or not, I would offer a nod of yes.

Take away his popularity, his place in this world, his wife, his secret service and if all remains is a father who writes a letter to his two daughters and tells them that he wants this world to be a better place for them as girls who will grow to be women, well, I think enough has been said right there.

Any parents out there write to their daughters and sons as well?

hi Lisa--just want to say that I am in complete agreement with you on what matters here. I would add one refinement in that Obama needs to listen to women about what women need. And I don't mean just highly educated, powerful, white women. I mean to all women. 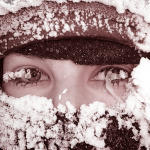 by Sarah Marshall
When I began reading Blair Braverman’s memoir, Welcome to the Goddamn Ice Cube, I knew I would love it because it chronicled her life as a dog musher and her adventures in the Arctic.