During World War II, Rosie the Riveter became a cultural icon symbolizing women at work in manufacturing. The hit 1942 song “Rosie the Riveter” paid homage to a tireless assembly line worker while government photographers captured striking photos of women at work building airplanes and ships for the war. But as male soldiers returned to the United States after the war, the government change course, urging women to leave their industrial jobs—millions of women returned to working in lower-paid fields like clerical work or working in the home. Ever since then, manufacturing has stayed a male-dominated field. These days, according to recent research, 87 percent of the workforce in the American transit manufacturing is male.

Now, a new photo exhibition at Los Angeles’ Union Station captures images of modern-day Rosies working in manufacturing. The Jobs to Move America coalition and the Los Angeles Alliance for a New Economy are hosting the “Women Can Build: Re-Envisioning Rosie” portrait series, which aims to celebrate the women who are building America’s transportation system—and put pressure on major companies to recruit and train women for high-paying manufacturing jobs. Pulitzer Prize-winning photographer Deanne Fitzmaurice put together the series of 15 photos of women who work on trains, buses, and for public transit agencies. The photos harken back to the bold lighting and on-the-job environments of the original wartime Rosie portraits.

Here are five of my favorite photos from the series, all of which are credited to Deanne Fitzmaurice. All the quotes and descriptions in these photo captions are from interviews posted along with the collection at WomenCanBuild.org. 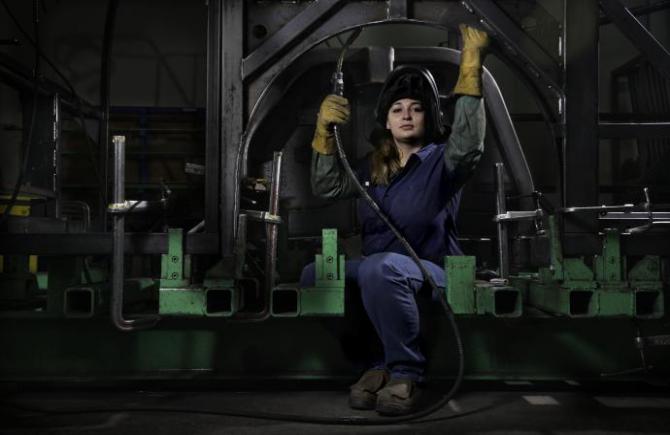 Chancy Davis is the only woman welder at the New Flyer Industries bus factory in St. Cloud, Minnesota: “Boys will be boys and pick on you. They will give you a little crap. Once they are comfortable with you, they’ll start picking on you. But that’s how you know you’re part of the team.” 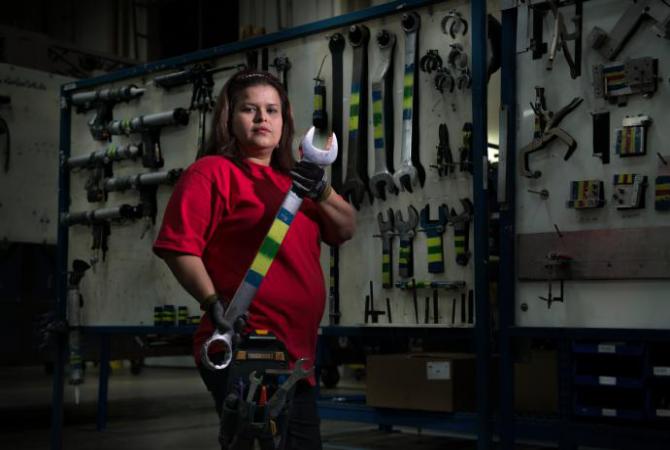 Brenda Martinez Shroeder was born in Guatemala and lived in California before moving to Minnesota, where she worked under terrible conditions in a chicken-processing plant before landing a job as an audit line worker at a New Flyer bus factory. 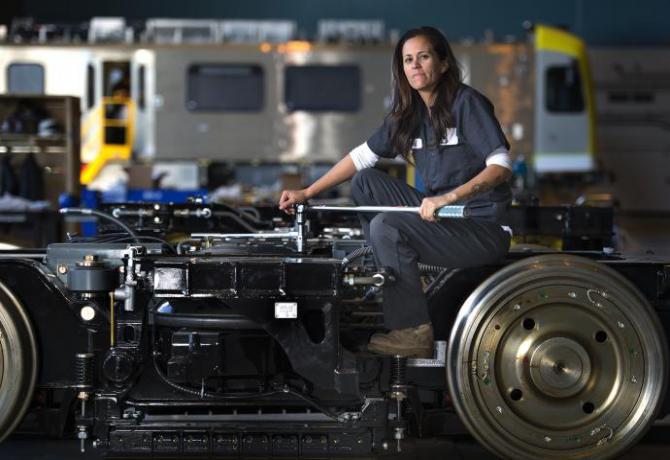 Ami Rasmussen served as a light vehicle mechanic in the U.S. Army for four years before she got her job as an interior assembly foreman at the Kinkisharyo railcar factory in Palmdale, CA. She’s one of 12 women in the factory. “My male coworkers here are better than I expected, I got open arms from every one of the guys,” she says. “Plus, I was in charge of 78 guys in the military, so I thought, ‘I got this.’”

Lilla Wallace is a cleaning specialist at a railcar refurbishment facility in Los Angeles, where she cleans Metrolink trains. “We do two cars a day—the whole thing! It’s detailing, elbow grease, hard cleaning, hard work, not soft cleaning,” says Wallace. “We need a union in the cleaning staff.  We get paid crumbs, just a little more than minimum wage.  I work 40 hours/week, but our overtime is all messed up.”

Jay Fatima Tapia is an equipment operator at a railcar maintenance facility in Los Angeles—for the past three years, she’s been the only woman working there. “I love hands-on work,” she says. “My dad wanted me to be a doctor or a nurse like my sisters.  But I wanted to work outside.”

The photos are on display at Los Angeles’ Union Station through June 19. You can also see the whole collection online.

Thanks to Ellen Krout-Hasegawa at Capital and Main for telling us about this project!

Relevant: For "X-Files" Revival, Gillian Anderson Was Offered Half What David Duchovny Was Paid 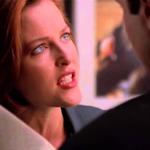 by Sarah Mirk
And *this* is why Scully always has to whip out the skeptical sigh.