About that Ms. Cover | Bitch Media

About that Ms. Cover

Mandy wrote a great post on the upcoming Ms. magazine cover last week that I've been meaning to respond to. First of all, I'm in this issue, so I'm a bit biased to think that y'all will judge the issue based on the cover and will skip the great article on mom blogs. But that cover...

Mandy makes some great points that there are those of Hindu faith that see the use of multi-armed imagery as co-opting their deities. Her post really made me think and consider my own religious blindness. As a recovering Catholic, I tend to ignore religious imagery and how it gets used in pop culture. It's not something that pops up in my head of the many warning signs that set off my alarm. So I appreciate it when I can read something that makes me think, "I'm so ignorant!" 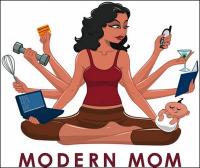 That said, the image of a multi-armed woman in relation to motherhood is most likely as old as motherhood itself. I imagine this is why women papoosed or slung their infants to them as they worked the fields. As some in the comments of Mandy's post pointed out, their own mothers use to say "I wish I had another set of arms!" or "I don't have 8 arms missy!" I've always viewed the multi-armed image of motherhood as relating to an octopus. Again, growing up ignorant of Hindu deities, the octopus or spiders, especially in cartoons, were seen as having an ability us humans didn't have - extreme multi-tasking. And today's moms are pushing the boundaries of multi-tasking.

Tech companies may target advertising to sell us on the latest PDA so we can balance our kids' many schedules, but the moms I know use their PDAs to get their own work done WHILE at tee ball practice. We're multi-tasking our way through the day.

So is the image on the Ms. cover a slap in the face to those of Hindu faith? Perhaps. But it's also the best way to depict the life of a today's mom. I'm not a student of Hindu deities, but were any of them also multi-tasking mamas? And I'm being totally serious with that question. I don't mess around with goddesses.

It's straight-up racist, and claiming that there's just no better way to express it is lazy and a maneuver to avoid racism. It has little to do with religion, and it's ill-considered. And it's definitely not an octopus. That's totally spurious.

I love <i>Ms.</i> I subscribe. And I'm sure there's great content in this issue. But this cover shouldn't be defended.

Wrote more on this over at my blog.

totally agreed. come on, Bitch, you're better than this. I usually look to you to tear apart racist misappropriations like this, not justify them!

Thank you. I completely agree with you. And I agree that "bitch" does not need to be defending it.

While Bitch did invite me to blog here, none of the bloggers (unless they are Bitch employees, I guess) are representing Bitch. What I write is representing just me. Don't bitch to Bitch. Bitch to me. Oh wait, y'all already are.

I'd say the main problem is that Ms chose to depict the multi-armed woman in the exact same pose as in Hindu imagery, rather than just as a many-armed woman. There is nothing wrong with saying a mother needs an extra set of arms, or depicting a mother with enough arms to get her work done, but it is visually tied to Hindu imagery, and that's why it's wrong.

Thank you! That's one point I didn't quite clarify. There is an image of multi-armed mothering that isn't tied to Hindu imagery. But again, my words failed me and thus got me in trouble.

...between "racist" and "culturally insensitive/ignorant"? b/c I would say this cover is definitely the latter, but not the former. And I do think there's a difference, even if it's just one of active malice versus passive ignorance and appropriation. Either way, one thing is for sure—Ms.'s covers are always hella ugly. I don't think they put much thought into them in general, and that could certainly help explain this one.

I was pondering that same differentiation last night.

im sorry, but this is a different story than the danish cartoons of muhammad which were in fact both racist and culturally insensitive. in islam, it is forbidden to create visual images of sacred individuals and therefore a complete affront to the religion and those who practice it, but there are not the same restrisctions on iconography in hinduism. the intent of the cover was not to disparage, demean, ridicule or mock the religion or its followers.

we need to be wary of confusing cultural appropriation and cross-cultural communication. by referencing the goddess Kali, who is often portrayed as a mother-goddess, Ms. is reminding readers of the multitude of demands placed on mothers and the way in which society expects them to have almost super-human abilities. perhaps this is a tad simplistic and cliched of a point for Ms. to make, the use of a non-western symbol does not necessarily connote ill-intent or even ignorance.

the implication of this outrage is that is no way in which a westerner can represent, take part in or appreciate the cultural product of another culture. and while cultural appropriation is a negative result of globalization, it is necessary to think critically about the way in which we approach suspected cases. lambasting this cover as racist does nothing to further conversations about truly offensive and ignorant examples of western privilege.

if you want something to get truly up in arms about when it comes the appropriation of eastern religious thought, consider the commodification of buddhism or the overwhelming amount of yoga studios in newly gentrified urban areas.

“if you want something to get truly up in arms about when it comes the appropriation of eastern religious thought, consider the commodification of Buddhism or the overwhelming amount of yoga studios in newly gentrified urban areas.”

That’s part of what makes the cover problematic. People – Americans – may not find this image offensive because they find it common place. It’s really an image that references white middle class experiences with eastern religion (i.e., yoga studios, Zen retreats for overworked yuppies) rather than non-American Hindu or Buddhist people’s experiences with the religion…Basically practices and experiences with the religion from outside of the U.S. The cover makes sense if you are vaguely familiar with Hindu iconography and it’s not offensive if you feel entitled to use that iconography for your own purposes. It makes sense to use Hindu goddesses to sell feminist magazines in a culture where it makes sense to use Zen meditation to promote the phone book. This cover is part and parcel of the commodification of eastern religion in the U.S. It doesn’t stand apart from it.

And, I am sincerely not trying to make this too personal about Kate S. - but is anyone else bothered by the “if you want something to get truly up in arms about” type comment? They seem to be popping up a lot and as a citizen of the semi-anonymous commenting masses; I think they aren’t our finest export.

I'm not Hindu which may immediately invalidate any point I want to make with some people. I'm Catholic, sorta, and I must say that had a women been portrayed hanging on the cross to convey and image of a mother martyr, I wouldn't find that offensive in a religious context, but I would think it was certainly sad that after so long, a mother still has to be portrayed as altruistic to be respected. The imagery of the woman multi-tasking with the elegant wrist turns of Kali or Quan Am or other goddesses that are many armed is a strong multicultural visual reference to an empowered, respected, competent mother. Why would any positive image of women or mothers, even if there is an implied religious context, be bad? I would be more offended by the very Western image of a clown or fool tossing balls in the air to imply the way mothers "juggle" their responsibilties. I think that makes light of something that is also universally sacred but usually not as vehemently defended --- the act of motherhood.

Let me understand this - any use of a multi-armed image is automatically referencing and/or misappropriating Hinduism? That seems a little short-sighted, no? Is there some kind of ban out there on the use of multi-armed images, just because Hinduism happens to have a multi-armed goddess? That smacks of censorship to me, and I think it's quite alright for Ms to have created the image and not busied themselves going through the list of every possible person and/or screed and/or religion and/or identity that they may or may not offend along the way. Because if you start thinking that way, at some point, you lose creativity, free thought, etc.

Only now I understand why indian woman has this many arms!