Students at a Catholic university in Portland are petitioning their school to do something new: Write sexual orientations and gender identity into the school’s non-discrimination policy.

Last week, students with mouths covered in duct tape paraded around the campus of the University of Portland to end what they say has been a legacy of discrimination at the school.

This same conversation is happening at Catholic universities all over the country, as increasingly queer-friendly young people come up against university’s traditional, anti-gay policies. Both Notre Dame and the Catholic University of America have had very public discussions about the role of schools in requiring a strict adherence to Catholic orthodoxy as students on campus pushed to create gay-friendly student groups.

University of Portland is a Catholic institution that allowed students to form an official Gay-Straight Partnership in 2008, but not everyone was happy with the decision. As conservative site LifeNews wrote at the time:

Although the Gay Straight Partnership has made pains to state that it will be adhering to Catholic teaching on sexuality, experience has shown pro-family advocates that such alliances typically result in the push to normalize and to affirm as morally acceptable an active homosexual lifestyle amongst university students.

That’s exactly what the students campaigning today want: A campus where all students feel safe and supported, regardless of their sexuality.

Junior sociology major Andrea Merrill says the school’s administration is just one part of an oppressive atmosphere in classes and among students. “I constantly feel invalidated when I have to explain myself to not only students but also professors as well,” says Merrill, who identifies as genderqueer. “That isn’t to blame the individuals I have come across but rather blame the hush-hush atmosphere that exists on campus about most minority issues.” Explaining queer identity to people on campus over the years has been “exhausting,” adds Barrett.

University of Portland President Bill Beauchamp told the student newspaper that the school had already made a gesture toward LGBT students and faculty by adopting a “statement of inclusion” in 2011 which committed the school to not discriminate based on sexual orientation. But, he said, if the school adds sexual orientation to its official non-discrimination policy, it could mean the university condones sexual practices not accepted by the Catholic Church.

Student Anna Barlow also looks to the Bible for her stance on the school’s policy, but comes to a different conclusion than President Beauchamp. Barlow is straight, but she’s bothered by the discrimination against her friends. “We need to stop placing people into categories based on their personal differences, but rather unite all students and faculty under the values that Jesus Christ teaches in the Bible,” says Barlow.

How many times does it need to be said "gay" is not a catch-all term for LGBT people. Policies that discriminate against gay people AND bisexual people AND trans people are not "anti-gay". The constant erasure of bi and trans people is precisely why those two groups receive more discrimination that cis-gays ever will.

Erasure is a big deal and lack of visibility has serious consequences for trans, queer, and bi communities. But oppression and institutional violence is not comparable. Comments such as "The constant erasure of bi and trans people is precisely why those two groups receive more discrimination that cis-gays ever will" seem divisive as well as neglectful of the intersections of oppression.

What is it you are suggesting with this reply? It sounds perilously close to a dismissal of valid concerns and a call to bi and trans* people to just be good little allies to the gay cause. I hope I am misunderstanding your meaning.

This makes me very happy. I went to a Catholic university for the first two years of my college education and it was very progressive in these rights. Overall, it wasn't the students on campus who were anti-LGBT, but the administrators/staff (not all, but enough). I knew several students who were proud and unafraid of telling others about their sexuality.

(Although there *were* students who were anti-same sex marriage, they didn't ignore or berate LGBT students for their sexuality, they treated them like everyone else)

http://www.youtube.com/watch?v=dQq7SltEcS0 -This was a campaign done by my alma mater, Stonehill College, and it actually ended up being successfull!

yayyyyy I'm so glad someone mentioned the struggle at Stonehill! Sarah LaFleur is one of the most bad-ass people in the world!!!! 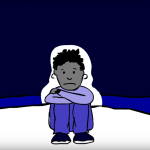 by Sarah Mirk
“It’s assumed that we’re better or beyond these kinds of problems, when in fact it’s pervasive in subtle and overt kinds of ways."