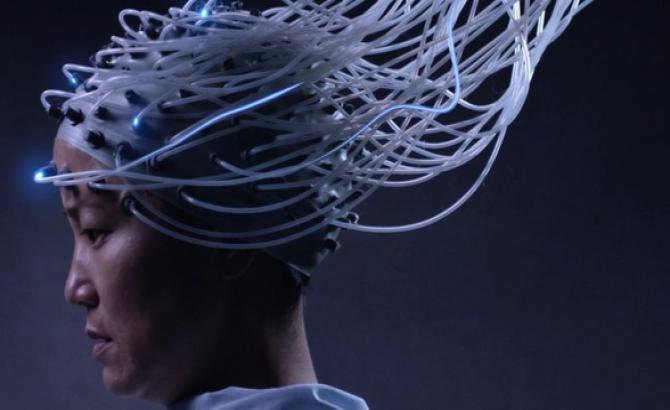 Jacqueline Kim co-wrote the screenplay for Advantageous and also stars as its lead, Gwen Koh.

Advantageous, the new film by Jennifer Phang, is a dystopian science fiction film about a possible future that is regressive for women.

In the film, Gwen Koh (played by the incredible Jacqueline Kim) is a single mother to Jules (who is played with remarkable talent by Samantha Kim). Gwen is a corporate spokesperson for the ominous Center for Advanced Health and Living. As she pitches their new technology, she says, “So many of us enter this world with disadvantages beyond our control.” The Center for Advanced Health and Living isn't limited to face lifts and breast augmentation. Its slogan—“Be the you you were meant to be”—doesn’t merely mean an enhanced you. Instead, this vague empowering message means their technology is ostensibly meant to give you control over your physical disadvantages.

The film—which was awarded a special jury prize at Sundance and started streaming on Netflix June 23—features stunning cinematography, excellent acting, and beautiful writing (albeit sometimes heavy-handed, which I'd prefer to writing that does not attempt to say anything). Advantageous tackles a laundry list of feminist concerns. Gwen is told that she has aged out of her role as a spokesperson, especially considering the “new you” technology they want to sell. It's noteworthy that the head of the corporation—and the one who seems to have made the decision about letting Gwen go—is a woman of a similar age. Ms. Cryer (Jennifer Ehle) pulls the strings, which shows that it's not just male forces that destruct and construct the feminine ideal. The world in Advantageous is one that has been designed by women, too, but it's still a capital of misogyny—radio broadcasts reference the rise in child prostitution, middle-aged women are homeless due to unemployment, and employers prefer to hire men lest they dangerously roam the street. Gwen's single motherhood is a source of sharp judgment from her peers and her parents. Many of these examples aren’t futuristic at all (see here, here, and here) and Advantageous does a compelling job of showing how while we may advance technologically, we have a lot of social progress to make. 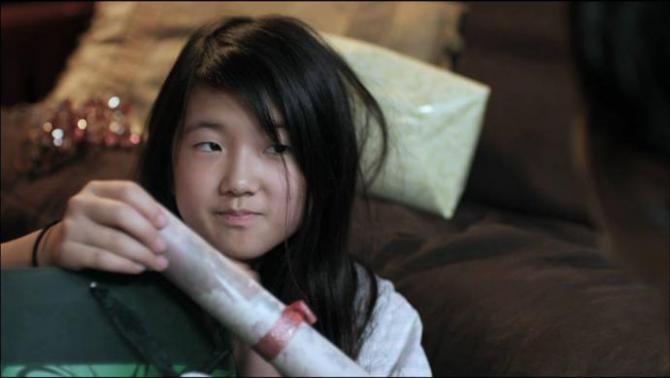 Samantha Kim plays Jules, whose mother faces hard choices about how to give her the best opportunities.

Advantageous is billed as a science fiction film, but it doesn’t feel sci-fi much of the time. Every once in a while, a drone or flying vehicle will jet past, the buildings will look futuristic, or the person on the other end of a phone conversation is a hologram. But for the most part, Advantageous is that kind of chilling dystopian science fiction that looks incredibly familiar. One scene that felt like it could have been any period in the past or present comes when daughter Jules asks Gwen, “Are women really going backwards going forward?” We can't help but involuntarily nod our heads yes, bombarded with the realities of the fictional world in front of us.

As Gwen is let go from her job and has difficulty obtaining any new prospects (except for selling her eggs, since fertility rates have sharply declined due to pollutants—another not-so-futuristic plot point), she asks, “Am I too old to be of use?” Again, we nod our heads, agreeing that in the world she lives in—a world that looks much like ours—the answer is yes. The Center also tells Gwen that they are looking for a more “universal look” to be their spokesperson. We assume that means “white” (and young), and director Phang addresses this in an interview with The L Magazine:

“In my mind the phrase 'universal look' wasn't exactly a euphemism for 'white' (though it often goes that way), but for a non-specific, multi-racial look. … Jacqueline Kim is Korean-American. The subtext is that Gwen's look was a benefit to the company for a moment, but that moment had passed.”

This “universal” look that Gwen is supposed to embody is an interesting end game of beauty standards: while beauty ideals may move toward a multicultural aesthetic, they’re still impossible to obtain without the winning genetic lottery ticket. We can hope that whiteness equaling “universal” will eventually change in the future as our population changes, however, Advantageous suggests that almost everyone will always be born at a physical disadvantage in a society that worships the unattainability of eternal youth and beauty.

It's important to note that in Phang's created world, “otherness” is highlighted mostly through age, gender, and beauty, and less about ethnicity. At The Verge, Emily Yoshida points out that “Advantageous also happens to have a mostly Asian cast without overtly being about Asianness, which makes it some kind of rare unicorn.” Phang critiques the desire to conform to a universal ideal while at the same time providing an excellent example of how storytellers and filmmakers don't have to cast white actors for a story to be universal.

Gwen’s ethnicity isn’t what is most disadvantageous to her—it’s her age. How can a naturally aging woman convincingly sell a technology that promises to stop aging? The “ideal woman,” then, is seen as incredibly young and ethnically ambiguous. 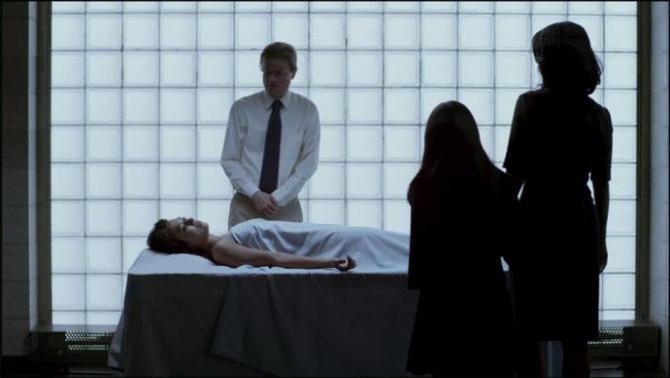 Gwen must change so she can save her career and afford opportunities for her daughter. In the film, a woman's sacrifice and a mother's sacrifice are woven together to reveal that society continually sacrifices women—older women especially—at the altar of “never good enough.” While Phang beautifully addresses so many issues facing women in our society, she has highlighted her focus on women's pressure to change. She says:

“One of the deeper concerns that I wrestle with in my work is how women around the world are encouraged to change themselves in many ways to carve out a place and survive. But it was also important to me to investigate, through Gwen, whether the act of choosing to change your surface appearance somehow altered your inner qualities. I wondered whether our self-respect might become altered for better or worse after we commit to a surface change. And does our respect for others increase or decrease if they don’t follow our example? And then… is this a world we can be at peace with? Can we accept a world in which these concerns occupy so much of our energies and potential for productivity?”

In Advantageous, Phang asks many questions, not only of the characters, but also of our own culture. Can we accept this world? Advantageous—and certainly feminists—would resoundingly answer “no.”

Related Reading: Rewriting the Future — The Links Between Science Fiction and Social Justice