Assia Djebar, originally Fatima Zohra Imalhayene, was born in 1936 in Algeria, at that time a colony of France. In 1955, not long after the beginning of the Algerian War, Djebar became the first Muslim woman to be accepted to the École Normale Supérieure in Sevres, France. The three years that Djebar spent studying history at the university were fraught with the political and personal tension born of the Algerian War and Djebar’s Algerian and French experiences. In solidarity with her home country, Djebar and other Algerian students held strikes and refused to take their exams, and Djebar left the university in 1958. She conducted interviews with Algerian refugees in Morocco and Tunisia for the National Liberation Front’s anti-colonial newspaper El-Moujahid and worked as a professor in Morocco until Algeria declared its independence on July 3, 1962, when she returned to Algeria to work at the University of Algiers.

In the midst of her university years, Djebar published her first two novels, La Soif and Les Impatients (she also took on her pen name, fearing that her father wouldn’t approve of her writing). The novels were much less politicized than her later writing and received criticism for failing to acknowledge the then-current political climate in Algeria; still, these novels—written in French but set in Algeria, using romantic plots to explore female identity—foreshadowed many of the themes that are central to Djebar’s later work.

After decolonization, Algerian writers were expected to write in Arabic rather than French; Djebar struggled with this expectation not only because she felt less able to express herself in Arabic, but also because she found she could not entirely separate herself from her French identity. This led the now four-time novelist to take a decade-long break from writing, during which time she turned to filmmaking. Djebar’s first film, Les Nouba des Femmes de Mont Chenoua, featured firsthand accounts from Arab women speaking their native language with subtitles in French. In 1980, Djebar made her return to literature with Femmes d’Alger dans leur appartement, whose title is taken from a painting by Eugene Delacroix in which Arab women are painted as servants and members of a harem. Much of Djebar’s work, including Les Nouba and Femmes, seeks to give Arab women a means of representing themselves outside of the confined and submissive roles in which the Western gaze posits them. The Delacroix painting: exoticism at its finest?

In the thirty years since, Djebar has continued to develop her work around the dichotomies that she struggles with in understanding her own identity, such as man/woman, French/Arabic, East/West, and collectivity/individuality. For Djebar, and for other women, French-Algerians, expatriates, and so on, facing these binaries becomes a struggle between identification and dissociation—those who identify with both of two groups that are set against one another often find themselves feeling excluded entirely. The trajectory of Djebar’s writing and career show both her attempts to combine competing aspects of her identity and the apparent winning-out of certain aspects. For example, she attempts to imitate the sounds and rhythms of Arabic in her French writing, and her book L’Amour, la fantasia is a collective narrative of Algerian women’s history and her own autobiography. However, her novels of the ’90s and ’00s reflect disillusionment about the Arab world in reaction to increasing terrorist attacks, she is a member of the Academie Francaise (an institution devoted to preserving the French language), and her books have not been translated into Arabic.

Djebar currently works at New York University as the Silver Chair Professor of French and Francophone studies, and her most recent book, Nulle part dans la maison de mon pere, was published in 2008. I would love to read Djebar’s thoughts on the Arab Spring and Algeria’s role, but had no luck finding anything—if you know of any more recent articles or publications she’s written, please leave them in the comments!

she seems so cool. will need to read her books.

Relevant: Remembering When Reno Was the Divorce Capital of America 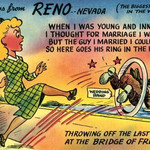 by Ben Marks
In the 1930s, the city of Reno, Nevada, shined like a beacon of hope to the unhappily married.