Excuse me while I gather my bearings. Where do I even begin? Who is more badass than Audre Lorde? No, really. This is a question I want you to answer. Can’t think of anyone? Good. Did you think of someone? Don’t tell me yet. You’ll ruin this moment. Born in New York City on February 18th, 1934, Lorde began reading and writing by age 4, wrote her first poem in the eighth grade, and was quickly growing into the wonderful poet, writer, theorist, and activist so prominent in fields of contemporary feminist, queer, and race theory she would become.

As someone who thoroughly identifies as a queer (and all intersections therein) theory nerd, I’ve read countless essays by white lady feminist scholars, written in ways a fresh college student could barely wrap their head around. My eyes were tired, my brain was deep fried for far too long, and I sought something else, not necessarily better, but I guess, yes, better. And no, I’m not putting down queer pioneers like Judith Butler, or Gayle Rubin, or Eve Sedgwick (etc. etc. etc.), I’m just saying that there’s only so much of that you can handle before you get overwhelmed and end up looking for videos of kittens on YouTube instead. Coming across Lorde’s work in my second semester of college was more than a breath of fresh air. Accessible, but so profound, beautifully and tenderly written, yet incredibly strong and intense in her messages, I devoured Lorde’s work; I let her words guide my studies, and haunt the art I create. Lorde attended Hunter College High School, but soon after graduating, she became estranged from her family while experiencing the grief of her best friend’s death. She then attended Hunter College from 1954-1959 and studied library science, spending one of those years at the National University of Mexico, where she confirmed, asserted, and renewed her identity positions—in both personal and artistic senses—as a lesbian and a poet. She then received master’s in library science from Columbia University in 1961. Her work, primarily her poetry, was published regularly throughout the 1960s, in Langston Hughes’ New Negro Poets, USA, and in many anthologies and black literary magazines. She was quite active in civil rights, anti-war, and feminist movements, as well as continuing in gay and lesbian activism through her books and writings.

Lorde’s focus in both her poetry and other writings became not just the struggle of the woman, but rather every oppression that one holds, and the ways in which our varied identities inform one another, understanding her own identities as a “concert of voices.” Criticizing feminists of the 1960’s for only catering to the white, middle-class woman, Lorde identified experiences of race, class, gender, sexuality, age, and ability as all of the same importance, inevitably enmeshed in the way(s) we live our lives (intersectionality, y’all!), stating, “I cannot afford the luxury of fighting one form of oppression only. I cannot afford to believe that freedom from intolerance is the right of only one particular group. And I cannot afford to choose between the fronts upon which I must battle these forces of discrimination, wherever they appear to destroy me. And when they appear to destroy me, it will not be long before they appear to destroy you.” (“There is No Hierarchy of Oppressions,” Audre Lorde, 1983) She married an attorney, Edwin Rollins, but they divorced after having two children. Lorde became the writer-in-residence at Tougaloo College in Mississippi, where she met Frances Clayton, a professor of psychology, who would be her romantic partner for nearly 20 years. Within this time period, she would also have a brief affair with sculptor and painter, Mildred Thompson.

In 1980, along with fellow badasses Barbara Smith and Cherrie Moraga, amongst others, she co-founded Kitchen Table: Women of Color Press, the first United States publisher for women of color.

Lorde was diagnosed with breast cancer in 1978, and underwent a mastectomy. Six years later, she was diagnosed with liver cancer. From 1991 to her death on November 17th, 1992, she was the New York State Poet Laureate, and remains known and loved as the “black, lesbian, mother, warrior, poet.”

& one of the reasons I went to library school & believed it was possible to be both a writer and a librarian.

she was my professor in college---at hunter. a lovely woman... 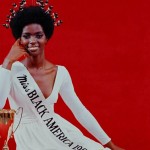