Carmen Miranda, the lady in the tutti-frutti hat, captivated global audiences from the 1930s through the 1950s. She had charm, talent, and money. She also had an incessant loyalty to her identity—affording curiosity, admiration, desertion, parody, and her own self-mockery. All this from a pop icon who once said she only needed a good bowl of soup and the freedom to sing to be happy. I was fascinated, as a child in the early ’80s, watching classic reruns of Miranda’s movies, and so was the rest of the world some 50 years earlier, their gaze crystallizing Miranda into the Brazilian Bombshell that foreign audiences adored, Brazilians loved to hate, and that she tenaciously acknowledged as her fate, claiming that bananas were her business. (A 1995 biography, Bananas Is My Business, served as the main source for this entry.)

Born Maria do Carmo Miranda De Cunha in northern Portugal in 1909, Miranda’s family picked up and left for Rio de Janeiro, Brazil when she was a baby. Growing up, Miranda embraced Samba, a genre considered slum-music by the classist Rio society of the time (which, according to contemporary NYC-based Brazilian artist Vik Muniz in the 2010 documentary Waste Land, remains prevalent in Brazil today). Miranda had worked in a hat shop, casually singing as she made hats and modeled them for clients, before one of them invited her to formally sing at a party at the National Institute of Music. While performing tangos for the audience, Miranda impressed one musician/composer, who later took her to RCA Victor in Rio to audition and record her first song in 1930. It was a radio hit despite the thinking in Rio at the time that a woman didn’t really belong on radio. By the mid 1930s, Miranda was a Brazilian pop star, nicknamed The Remarkable Girl. She finessed her way through the then male-dominated music scene, not censoring the way she spoke or the way she carried herself.

Here is joyous Carmen (left) with her younger sister Aurora, performing as The Miranda Sisters for a early ’30s Rio radio show (the video quality is, well, old):

In 1939 Carmen Miranda appeared on stage, wearing for the first time her glamorized version of Bahiana dress, the now-iconic fruit & jewel ensemble billions associate her with and what she wore when Lee Shubert, NYC theatre producer, discovered her in a Rio nightclub that same year. Shubert offered her a contract, one that Miranda wouldn’t sign unless her band accompanied her and one that the Brazilian President Getúlio Vargas supported in hopes of solidifying political relations between the two countries.

Miranda and her six-man Brazilian band left for New York a few nights later, backed by a country that deemed her a goodwill ambassador. She took her role seriously, having said this to the crowds the day she departed (quote from the Bananas Is My Business documentary):

My dear friends, in New York I’m going to show the rhythm of the Brazilian music, the music of our land. I’m afraid and I feel it’s a very big responsibility. Always remember me and I will never forget all of you.

Miranda became an overnight sensation in the U.S., but, unbeknownst to her at the time, at the expense of her identity back in Brazil. The U.S. media enthusiastically exoticized Miranda, calling her “the brandy peach from Brazil,” playing off of Miranda’s limited English—she was  portrayed as a bimbo who loved men and money (which is something I believe Miranda herself learned to manipulate very early on, not because she wanted to, but because she had to for her identity), as a Brazilian, and as a Brazilian woman who embraced and adopted what her society deemed unworthy: Samba music, “negro music from the slums.”

Over the next year and half, Miranda and her band performed nonstop on Broadway, sometimes appearing in two places at once, traveling between acts and sets. Miranda also began starring in musicals, her first with Twentieth Century Fox in 1940, Down Argentine Way, (all of which did a fine job showcasing her talent and furthering her stardom, but reduced Latin America to the confines of Miranda’s on-stage persona—something Miranda would soon and continually be criticized for having done).

After a year in the U.S., Miranda returned to Rio an international superstar. Ironically, she was accused of having been Americanized by the country’s newspapers and elite, deemed unworthy of having too much fame and fortune for a simple Samba singer. The Brazilian media blasted her first appearance back in Rio in front of high-society types where she performed an American version of a Brazilian song; she apparently stopped the show early because of the audience’s displeasure. According to accounts at the time, Miranda was heartbroken—she didn’t understand the crowd’s poor reception to her international celebrity. Nothing of her routine really changed while on Broadway; she sang in Portuguese, had her Portuguese band accompany all her performances, wore the same Bahianan dresses she wore before leaving Rio, and remained loyal to her homeland, Brazil. She responded to the criticism the best way she knew, through song, recording, “Disseram que Voltei Americanizada” or “They said I’ve come back Americanized” in English in 1940, singing candidly about:

Why so much bitterness? How could I ever be Americanized? I was born with Samba. I spend the nights singing the old songs. I hang out with hustlers. I say Eu te amo never I love you. For so long as there’s a Brazil, my heart is with my homeland still.

After the ugly reception she received in Rio and throughout Brazil, Miranda returned to the U.S., Hollywood-bound and with a new contract, where she made 14 films, often playing variations of her persona, including That Night in Rio (1941) to The Gang’s All Here (1943) and If I’m Lucky (1946), her last film with 20th Century Fox. Miranda’s tenacity became evident in her business exchanges the movie moguls and among the Hollywood celebrity circles; she was respected. One the U.S. papers chauvinistically conceded:

Somewhat to its astonishment Hollywood has found out that Carmen Miranda is not just the latest in a long line of South American passion flowers. Under that basket of fruit and vegetables, a well-oiled little brain is ticking away – now she’s the highest paid gal in the U.S.

Through the mid to late 1940s, U.S. radio, newspapers, and pop critics got sick of Miranda fever, claiming she was nothing but a novelty act worthy only of parody (yet, a pop icon worthy of parody, no less). At the same time, Hollywood’s recycled projection of Miranda’s persona as the singing, dancing, comedic, and hot-tempered Latina became problematic for several reasons, starting with misrepresentations of countries, such as Argentina, Brazil, and Cuba. It was a twisted type of déjà vu, as Miranda was again being attacked by Brazil and now, other Latin countries’ papers, for doing what she found joy in doing and for genuinely representing, she believed, a loyalty to her country and her identity. Having first been criticized years ago by the media back in Brazil for identifying as something she wasn’t supposed to identify with (Samba), now she was being criticized by Latin people as not being the right type of Latino to play a role in Hollywood’s movies. Miranda was damned if she did and damned if she didn’t.

So, was Miranda a casualty of Hollywood celebrity? Brazil’s failed appreciation of her celebrity? Or a casualty of her own determination to forever embrace an identity that no one but she fully understood, but one that had been questioned, despised, monopolized, celebrated, and parodied? All because, I say, she personified joy. Yes, Miranda was typecast, stereotyped, perceived as a lavish, sometimes funny, sometimes uptight Latin woman—for many at the time, easy on the eyes and sharped-tongued. But, first and foremost, she was a pioneer: for women in a male-dominated industry in Brazil, for the Samba culture she admired and adopted and defended throughout her rise to fame, for Latina women in early Hollywood, for her business savvy, for her continued affinity to Brazil, and so much more.

Miranda fought to keep her joy, buying out her movie contract with 20th Century Fox in order to move beyond being the Chicka Chicka Carmen. Yet, it’s as if doing so was to her own demise. She played dual roles in 1947’s Copacabana, personifying another version of the Brazilian bombshell and portraying a blond fair-skinned French singer (a film perhaps eerily suggestive of Miranda’s perception of herself at the time). She also met and married her only husband during this film, co-producer of Copacabana, and was featured as herself on Looney Tunes that same year. She starred in three additional films, all that unfortunately lacked the luster of her her earlier films with Fox, the last being 1953’s Scared Stiff. She continued to perform on variety shows, too, but Miranda just wasn’t the same. According to Bananas Is My Business, her family blamed a troubled and abusive marriage for Miranda’s nervous breakdown, forcing her to return to Rio to recuperate from acute depression and anxiety, before heading back, once again, to the U.S. to resume her celebrity career in 1955.

For the next few months back in the U.S., Miranda continued performing until the day she nearly collapsed on The Jimmy Durante Show, unknowingly suffering from a heart attack. Hours later, in her bedroom, she died from a second heart attack. She was 46 years old. 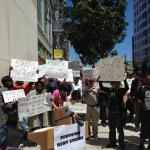