Adventures in Feministory: Catherine McAuley and the Sisters of Mercy | Bitch Media

Adventures in Feministory: Catherine McAuley and the Sisters of Mercy

As a radical feminist, raging homo, and recovering Catholic, I’ve rarely, if ever, felt compelled to wax poetic about any organization affiliated with the Catholic Church. Then I met a Sister of Mercy, and my dogmatic belief in Catholicism’s all-encompassing evil was shot dead on the spot. The Sisters of Mercy work internationally to promote social justice in ways that are often political and sometimes piss off the Vatican. In the United States, they are one of the groups of nuns currently being investigated by the Vatican, ostensibly because they don’t wear habits, live independently, and are committed to fixing societal problems even if it means occasionally pooh-poohing some of the Church’s archaic stances on things like abortion, condoms, and solutions to the AIDS crisis. 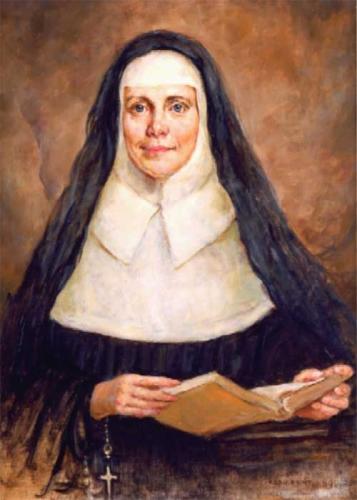 The sisters’ work continues the legacy of their accidental founder, Catherine McAuley. McAuley was born into a wealthy Irish family in 1778, and after inheriting a large sum of money in 1822, she decided to lease a property in her hometown of Dublin to take in poor women and children, and to provide them with shelter, food, and an education. Other women in the area were impressed by her compassion and decided to join her in her mission. The Church wasn’t too keen on a group of women setting up shop without its approval, so Catherine decided to become a nun in order to make things look more official and keep the community appeased. On December 12, 1831, McAuley took her vows, and she returned to the home she started as the first Sister of Mercy. McAuley only lived for ten more years after her return, but in that time she founded 14 other Sisters of Mercy communities in England and Ireland. By 1954, the Sisters of Mercy had made their way to New York City and San Francisco, where they opened schools and hospitals and continued to spread throughout the Americas. Today, there are 10,000 Sisters of Mercy serving in the Americas, Australia, Great Britain, Ireland, New Zealand, Newfoundland, and the Philippines. The Sisters of Mercy typically embed themselves in communities addled by drugs, poverty, unemployment, war, and racism, and work to address the causes of these social ills. In the tradition of their founder, the welfare of women and children is their main priority, but they work with anyone who’s down and out, regardless of gender. They’re known for being active and recognizable members of the community, as opposed to living isolated in a convent (they’re like a non-fictional version of Sister Act.) You can find them providing a community space for drug addicts in Southwest Baltimore, teaching in the public school system in West Philiadelphia, helping the chronically homeless get off of the streets, and getting low-cost medication to poor and uninsured HIV patients. They take political stances, like when they recently lobbied for governments to recognize the human rights violations occurring after a recent military coup in Honduras, or when they criticized Bush’s veto of a bill that would have provided all children with affordable health insurance. Their charter and mission statement spell out their philosophies regarding the different issues they’ve devoted their lives to addressing. On the environment, they vow to “to reverence Earth and work more effectively toward the sustainability of life and toward universal recognition of the fundamental right to water.” They also vow to stand in solidarity with immigrants, recognizing not only poverty as the main cause of migration, but also the difficulty immigrants face when forced to leave their homes and cultures to make a way in a new one. Housing, healthcare, education, and racism are all issues that the sisters’ work continues to address. All-in-all, these are some pretty radical ladies. They are in direct contrast to just about everything the Church has come to represent for me. My friend, whose aunt is the Sister of Mercy who blew my mind, described her aunt’s community of nuns in West Philadelphia as a sort of commune made up of some of the most progressive women she had ever met. Her aunt could barely control her eye-rolling when she talked about the Vatican’s investigation. “It’s always a struggle trying work within this male hierarchy,” she said. “But it’s a good thing, I think. A lot of people think of nuns as being subservient, but in reality we’re all given the chance to devote our lives to our work.” All of the Sisters are given the opportunity to pursue a Master’s, and many of the women were already in advanced professions upon joining. It seems to me that the Church is a double-edged sword for many in the community. It provides the spirituality that the women entering the Sisters of Mercy are looking for, and allows them to devote their lives to social justice. The oppressive tendencies of the male leadership, as well as the Church’s tendency to separate itself from reality, are just a couple of hurdles to jump over. And let’s face it, who among us hasn’t had to deal with an asshole boss? The investigation is unfortunate, but if anyone can get through it, it’s these clever ladies.

I have a major problem with the idea that it is possible to find social justice by working from within an institution committed to patriarchy, homophobia, and a variety of other evils. No one will convince me that the basic tenets of christianity (and the tenets of judaism from which they arise) are not anti-female, anti-homosexual, anti-Sapphic, and anti-human goodness. That makes the institutions based upon them inherently anti-female, anti-homosexual, anti-Sapphic, and anti-human goodness, as far as I can tell. There is spirituality outside the woman-hating world of christianity, believe me. One does not have to subscribe to organized religion to find spiritual connections. One does not have to live within the confines of christianity to do good things--in fact, it's far easier to do from without such confines. I have known Quakers whose work I respect immensely. However, the fact that they need to base that work on the woman-hating words of a patriarchal god just makes me feel a bit ill. This is no different. Propping up an institution based upon hatred kind of takes the shine off of any good work you do.

It would seem that anyone ready to negate someone's life work for others based on their own blind bigotry is lacking in the spiritual fulfillment they claim is available.

Yeah for women who fight the good fight within any institution.

Wait, "the woman-hating words of a patriarchal god?" From my understanding (based, admittedly, in an extremely liberal Catholic upbringing), the word of God is far from rigidly defined in Catholicism, especially in the strand of Catholicism that many Sisters of Mercy find themselves drawn to. While it's true that an unfortunate number of Catholics subscribe to Benedict's form of insane fundamentalism, there are those within the Catholic Church understand who that the words that they read in their 21st-century bibles are in fact a translation of a translation of a translation (etc.), and I'd argue that most of the Sisters of Mercy fall squarely within that latter camp.
So. I can understand having problems with the patriarchy and misogyny found within the Catholic Church and even within the Judeo-Christian mindset in general, but I cannot accept the disavowal of the Mercies' good works simply because they fall within that paradigm. I mean, the Catholic Church is investigating them for not being Catholic enough; it seems counter-intuitive for someone else to turn around and call them out for being too Catholic.

I have a great hope that progressives will step up and claim our religious and spiritual legacy, rather than ceding all ground to conservatives. Because we have a very rich tradition of radicalism that is informed by (rather than in spite of) religious faith.

We see this with the Jesuits, with liberation theology, with the Catholic Worker (which has anarchist roots) and the interfaith Fellowship of Reconciliation.

Social justice heroes who explicitly drew/draw from their religion, include:

Awesome :) I began working in Catholic health care a few years ago - one of our hospitals was founded by the Sisters of Mercy. Actually, I believe it was originally a sanitarium. Ironically, now our state is closing mental health centers, and our hospitals are some of the few remaining providers of mental health care. A losing a ton of money doing so, but what else would we do? Turn our back on them? Even though the Sisters aren't as prevalent within our hospitals as they once we, we still carry on their legacy.

Sometimes I think you need to look beyond the church to see people who are truly Chirst-like. I also went to a Jesuit University and feel I got so much more spiritually out of that experience than I ever did spending an hour a week within the four walls of a church. I don't really know what I identify as anymore (raised Catholic, but definitely not feeling that way anymore), but I think there are a lot of good people doing good work in the name of Christ. Not that I think you need Christ to do good work, but it sure beats some of the other stuff I read about that's done in Christ's name.

The Sisters of Mercy were one of the orders responsible for making many Irish women slaves in the Magdalene Laundries when they were forced to work without pay and were unable to leave the vile institutions. Many women were locked up the laundries for the majority of their lives for crimes varying from being the victim of rape to getting pregnant outside of marriage.

I attended a Sisters of Mercy school and found the nuns in it to be cruel and violent. I was once slapped by the headmistress Sr. Stephanie in front of the entire school when I was just 8 years old, it was one of the most humiliating experiences of my life and I still remember it more clearly than any other moment of my childhood. This was in the early 1990s, none of the lay teachers would ever lay a hand on students, only the nuns ever used physical punishments.