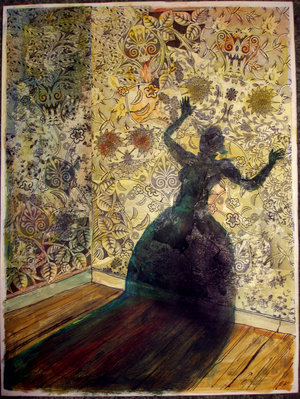 Charlotte Perkins Gilman is perhaps most famous for her 1892 short story, "The Yellow Wall-Paper," about a woman who's confined to her bed for a "nervous condition" after she fails to experience what her husband and doctor insist is the universal bliss of motherhood. During her bed rest imprisonment, she begins to see a woman trapped behind the wallpaper in her room. The story is famous for good reason: It can be interpreted as a critique of the male-dominated medical world of the time, an early exploration of postpartum depression, a feminist allegory that makes the case for women's freedom, or all of the above. But Gilman's body of work stretches far beyond this story, and her life as an early radical feminist is worth reading about! (By the way, apparently plenty of people agree with me: if your interest is piqued by this Feministory, there's no shortage of Gilman biographies to explore. I'll list the ones I used at the end of the post.)

The narrative of Gilman's childhood reads a lot like that of a heroine of Victorian literature. Her father, a descendent of the famous Beecher family (his aunts and uncles included Henry Ward Beecher, Isabella Beecher Hooker, and Harriet Beecher Stowe), left when she was a baby, so she was raised by her mother, Mary Westcott Perkins. Because of their financial instability, the Perkinses moved often, sometimes staying with relatives. This affected Charlotte's education in more than one way. It meant that she grew up around her Beecher aunts, who were bold, independent women with strong opinions. But it also meant that she lacked a formal education and spent a lot of time feeling isolated and reading alone.

By the time she reached her early 20s, she had developed strong feminist sensibilities, and longed to live an independent life writing and working for the causes she believed in (namely, economic and social freedom for women). But here comes her biographers' favorite conundrum: she was also in love and wanted to get married. Understandably, since she was, after all, a woman in the late 19th century, independence and marriage seemed irreconcilable. She did end up getting married to Walter Stetson in 1884, and had a baby soon after. During this first marriage, she famously struggled with depression and alienation from her new family life, and was prescribed a "rest cure." (Does this story sound familiar? "The Yellow Wall-Paper" is often seen as semi-autobiographical.) 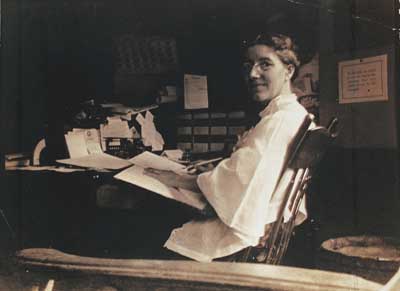 Charlotte and Stetson decided to get a divorce, which allowed her to return to her intellectual work. She wrote and lectured until her death in 1935, books like Women and Economics (which has been referred to as the "bible" for suffragists and feminists of the early 20th century), and The Home: Its Work and Influence. She held beliefs that were radical for the time and that would continue to be discussed by feminists throughout the 20th century and even today: that the domestic environment promoted by marriage oppressed women; that sex and economics were related in marriage, since women were expected to be sexual in return for their husbands' financial support; and that gendered toys were teaching girls to be subservient wives from a very young age. Unfortunately, she also held some beliefs about race that were common among white middle class social reformers of the time: for example, that immigration should be curtailed because interracial reproduction was weakening the evolutionary purity of Americans.

Margaret Sanger-esque ignorance aside, what I think is most interesting about Charlotte Perkins Gilman's life is her constant struggle to reconcile her emotions (which she saw as inherently feminine) with her drive to do feminist work. Although I haven't read her autobiography, the biographies I have read say that she worked hard to make sure her public image was devoid of any statements or actions that might imply she was driven by emotion or passion or anything but her intellect. At the same time, she wrote boxes and boxes of diaries and letters that revealed her to be an emotional person who felt that strong conflicting forces were at work inside her. I think this struggle is probably familiar to many women today: When sexist assumptions about the irrationality of women are still prevalent, how can we make sure our emotions and our intellectual work are taken seriously?

I've read "The Yellow Wallpaper" as both a student and a teacher and have always found it enthralling. It's good to know more about Perkins Gilman and that she accomplished far more than this one story.

Charlotte Perkins Gilman is my FAVE historical feminist. but I'm surprised there was no mention of the works "Herland" (1915) and "With Her in Ourland" (1916). In the former, CPG takes us through an anthropological study of a feminist utopian society, Herland, an analysis that also reveals the patriarchal structure of our society (past and contemporary); this is done through the narration of an American man, a scholar. In the latter, a Herlander travels with the narrator of "Herland" (he continues to narrate, providing us with his perspective as he recognizes the patriarchal structure, in particular its many failures) around 'Ourland' (patriarchal society).
I use these books when I teach classes about gender and society (Women in Contemporary Society, Sociology of Gender, Intro to Gender Studies); they are amazingly pertinent, unfortunately, as this makes evident the persisting gender hierarchy. it is all too easy for students to identify contemporary examples of CPG's satire.

I concur! She's one of my all-time favorite feminist thinkers and writers as well. And Herland is my favorite utopian novel and one of my favorite CPG reads. I wrote a paper about Herland as an undergrad (http://www.womenwriters.net/domesticgoddess/pdf/clemons.pdf) and wrote a more in-depth examination of her own feminist theological framework in grad school.

When I worked as a grad student at the Schlesinger Library (where her manuscripts are archived), I had the privilege of reading some of her childhood journals, working with unpublished Sunday school sermons, and even touching her death mask. In spite of her acknowledged limitations in terms of race, she was still an astute observer and critic of ubiquitous systems of domination as well as a creative, insightful, and extremely witty visionary of possible alternatives.

I agree! I read Herland last semester in American History of Women, and I'm currently working on a literary research paper, and I've chosen CPG and her works to interpret. Herland is available in full text version everywhere on the net. However, I've been searching high and low for a site that offers the full text of With Her in Ourland. Google ebooks, and several other sites, are charging over $100. Does this makes any sense? Does anyone know why the book is so expensive? Or, do you have any idea where I might look?

That illustration is brilliant. Can we get an artist credit on that?

According to the image source, the illustrator goes by Kaitaro. My Google skills can't find much else on her/him though, so if anyone else knows anything about it, please chime in!

Thank you for bringing CPG to _bitch_! She is an important writer, no one to be ignored in the annals of American literature, feminist history, and ...the history of American imperialism and the racial logic of our nation's exceptionalist claims. It's not "ignorance" to be set aside, in other words (and Gilman was anything but ignorant)-- I think it's so important for us to understand how some of our current feminist arguments, and claims, are bound to beliefs that gender, or "womanhood" or the "inherent feminine," whatever that is, can be discussed without discussing race. Gilman's feminism was deeply raced. Speaking as a feminist, I have to consider that seriously, and not set it aside as an "unfortunate" reflection of her times.

Thanks for your response. I mentioned Gilman's racist beliefs because I also think it's important that they not be ignored in our discussion of her. Most often, when people talk about Gilman, they talk about "The Yellow Wall-Paper" and not much else. I totally agree with your point that race can't be ignored when discussing feminism and its history, but I also don't think that means we should completely disregard the feminist work of women like Gilman. Much of what she thought is totally inappropriate for feminism today, and even the beliefs that still ring true should be considered in light of the work that came before and after hers. But that's why we have "Adventures in Feministory"!

P.S. I want to be clear that when I used the phrase "inherently feminine" I was referring to a belief that Gilman held, and not my own belief.

Lindsay-- yes, I knew that you were citing Gilman's own notions there. Her investment in the inherent, and some notion of the Ur-female, was centrally bound to investment in Lamarckian notions of racial "type," and the Social Darwinist claims of the era that really, we have yet to let go of, in my opinion. It's worth thinking about how much of her feminist arguments were framed around essentialist, racialized claims, and a disavowal of her own privilege, and considering how our own thinking can still be bound to much of the discourse she was immersed in.

[Of course, I tend to agree with her that women are the superior race, but I try to keep it to myself, so as not to hurt the boys' feelings ;) )].

Thanks, Lindsay, for continuing the Adventures in Herstory here!

such a treat to see the yellow wallpaper being talked about! i'm getting married soon and i find myself bringing that story up a lot, as in "and i don't want to go all yellow wallpaper after i become a 'wife' ". thank you for bringing up such an inspirational and interesting woman. (not that Bitch doesn't always, but still, charlotte is a gem.) 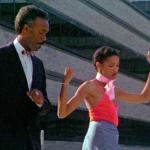