Although she’s often overlooked in favor of bigger names like Le Corbusier, Charlotte Perriand was one of France’s most influential designers.

Born in 1903, Perriand attended art school at the Ecole de l’Union Centrale des Arts Décoratifs, where she was less interested in the Beaux-Arts curriculum as she was in the metal and industrial design of modernism.

Le Corbusier, the functionalist/modernist architect, had mastered modernist exteriors but found he could not furnish their interiors with the right furniture. When Perriand approached him with her portfolio, she was dismissed with “We don’t embroider cushions here,” which was about the equivalent of “Make me a sandwich” in modernist design lingo—women learning avant-garde design were often shuffled toward weaving and textiles rather than architecture. After seeing her “bar on a rooftop” project, made out of aluminum, steel, and glass presented at the Salon d’Automne of 1927, Le Corbusier realized the error of his ways ways.

Perriand joined Corbusier and Jeunneret when she was 24 and was brought on for their furniture and interior design department, which they would later become well-known for. She was the only woman to work at their firm for ten ears.

Throughout her career she retained a commitment to erase dividing lines not just between the fine and applied arts, but between good design and popular accessibility, and vied for a democratic and collective approach to art. She also had strong socialist sympathies. Her politics can be most vividly seen in her collage “The Misery of Paris,” which accompanied one of her living room displays in a 1936 interior design exhibition. She received none of her usual accolades that year. Although the Perriand-Corbusier-Jeunneret trio worked collaboratively on many projects, more and more sources reveal that the credit of their ingenious designs belong mostly to Mlle. Perriand, if not entirely. Perriand reclining in a chaise lounge she designed

Corbusier’s very lack of enthusiasm for collaborative work led Perriand to leave the studio in 1937. But her career and designing didn’t stop after she left Le Corbusier’s studio (though you might think that after reading some sources!)

In 1940 she was invited to Japan to advise the Ministry for Trade and Industry on industrial design–no small business trip. Although her stay was meant to be only six months long, Germany invaded France not long after she left, prolonging her residency in Japan. When Japan allied with Germany, she went to Vietnam. The influence of Japanese and Vietnamese design and craftwork would largely influence her later works, including sliding doors, and using wood and bamboo where before she used aluminum. “Oh hey, just hanging out by this bookshelf I designed that excels in both form and functon.”
She was alter involved with the Formes Utiles, an art movement in the ’50s that was an extension of the Union of Modern Artists (which Perriand helped found and organized their first exhibition), which emphasized affordable and functional furnishings (forerunner of IKEA anyone?).

Despite her expert interior designs, Perriand loved the outdoors, and was a perfect architect for the Les Arcs ski resort, which combined her interest in communal living skills with her ability to merge interior and exterior, using wide glass windows for a panoramic view. So the next time you put your feet up, visit IKEA, or hear Corbusier’s name, think of Perriand! You can read more about Perriand and see her work in her autobiography, A Life of Creation, or in several large and heavy bound design books devoted to her artwork.

Thanks for writing about Perriand! It always helps put things in perspective for me as a designer, when I realize just how recent it was that women were such a minority in the field. Things have definitely changed (at least in the graphic design world that I inhabit), but in talking to friends who work in landscape architecture, I know it's still a boy's club—sure more stubtle in the sort of discrimination, but certainly still an issue women designers deal with today. 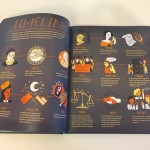 by Dahlia Balcazar
Here are seven picks to kick-start a youngster’s interest in women’s history, STEM, and sports—or to keep the fire burning for a grown-up!