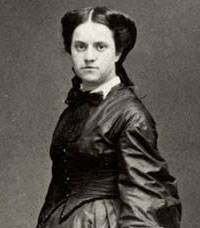 Hey there all you Brooklyn hipsters! Did you know that the Brooklyn Bridge is not only useful when one wishes to imply quirkiness (I’m talking to you, Gossip Girl), its completion was also overseen by the first ever woman field engineer?

Emily Warren Roebling was born in New York state in 1843, and became the chief engineer on the Brooklyn Bridge by default when her husband, Washington Roebling (the first chief engineer on the project) became ill. Hey, sometimes it takes a man contracting an exotic and fatal illness (Caisson disease, in this case) in order for a talented woman to get an opportunity to do her thing (sorry dudes, but it’s true).


As the only person to visit her husband during his sickness, Emily was to relay information from Washington to his assistants and report the progress of work on the bridge. She developed an extensive knowledge of strength of materials, stress analysis, cable construction, and calculating catenary curves through Washington’s teachings. For the next fourteen years, Emily’s dedication in aiding her husband in the completion of the Brooklyn Bridge was unyielding. She dealt with politicians, competing engineers, and all those associated with the work on the bridge to the point where people believed she was behind the bridge’s design.

In 1882, her husband’s position as chief engineer was in jeopardy due to his sickness. In order to allow Washington to complete the work, Emily went to a gathering of the American Society of Civil Engineers to defend her husband and became the first woman ever to address that Society. To the Roeblings’ relief, the Society responded well to Emily’s speech and Washington was permitted to remain Chief Engineer of the Brooklyn Bridge.

Ms. Roebling has also been credited with much of the design of the Brooklyn Bridge, though nothing has been made official on that subject. Regardless, the culturally significant and beautiful bridge that connects Manhattan and Brooklyn would never have been possible without Emily Warren Roebling’s ingenuity and engineering skills, and that’s something we can all raise a PBR to. (One too many hipster jokes? Sorry. I hope it doesn’t detract from the story of this inspirational woman. I just couldn’t resist.)

Actually, Emily Roebling wasn't married to John, John Roebling was her father-in-law. She was married to his son Washington, who went to my alma matter, RPI. (I know this because I used to work in the RPI archives when I went to school there.) Emily Roebling is pretty awesome, and I actually got the Emily Roebling scholarship when I was a student.