Ladyween (yes, that’s what we’re calling Halloween here at Bitch HQ these days—it’s gonna catch on, trust us) is fast approaching. If you’re still searching for the perfect costume, one that combines feminism with history and still leaves you looking sharp, look no further than the Adventures in Feministory archives!

There are dozens upon dozens of kickass feminists from history in those archives—more than enough for you and your friends to each pick your favorite and not end up at the party wearing the same costume (isn’t that the worst?). I’ve combed through and found five that wouldn’t be too hard to put together at the last minute, but the Ladyween possibilities do not stop here, folks. They are endless! OK, to the costume ideas: 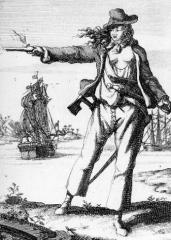 Put on a blazer, a scarf belt, and jaunty hat. Shove a plastic sword in that scarf and presto! You are now the dread pirate Anne Bonny! Try not to stab any landlubbers as you gesture with that sword whilst describing the hardships faced by women on the high seas back in the day. Ladyween bonus points: This costume allows for plenty o’ pirate speak, me hardies. Get a hat with some earflaps, a brown jacket and a pair of aviator sunglasses and now you’re Bessie Coleman, Queen of the Skies! Ladyween bonus points if you speak French, because Bessie Coleman actually had to go to France in order to become the first black woman in history to hold an international pilot’s license!

Speaking of pilots, if you don’t have the right hat to be Bessie Coleman, you might want to throw on a skirt, a military-style shirt, and a pair of boots to transform yourself into Major Marina Mikhailovna Raskova, leader of the Soviet Union’s all-woman 588th Night Bomber Regiment during World War Two. Ladyween bonus points: The 588th regiment was known as Nachthexen, or “The Night Witches.” Extra bonus: This would make a great group costume!

Get a white robe (a gi if you have one, but this is last-minute costuming) throw a belt on it and get ready to kick some ass because now you’re Rena “Rusty” Kanokogi, the first woman to earn a seventh-degree black belt in judo and a pioneer in making the sport accessible to women in a time before Title IX. Ladyween bonus points: It’s comfy, and you can kick stuff as a part of the costume.

OK, this one requires you to wear a civil war uniform, but I think you could approximate it with a blue work shirt and a pair of jeans if you accessorized it well enough. Add a few belts as straps and get a blue and black cap and you’re Cathay Williams, the union soldier who dressed in drag to afford herself a better life. Ladyween bonus points: Gender-bending opportunities for all!

As I said, these ideas are just the tip of the iceberg, since history has provided us with countless role models that we can dress up as come Ladyween. So forget those sexy clown sexy burglar sexy hotdog sexy sexy pre-packaged costumes and kick it Ladyween style with a feministorical costume! Who will you be this year?

Once I went as Gloria Steinem. No one got it, but I thought I was awesome.

I was Rosie the Riveter last year for one party. It worked fairly well, except the jumpsuit was much larger than I am. The belt did not work as well as planned. But people understood what I was.

This year, my best friend and I are going as suffragettes! High-waisted long skirt, big poofy, collarless blouse, flat rimmed straw hat with flowers all over it, and a sign that says VOTES FOR WOMEN. Can't wait :)