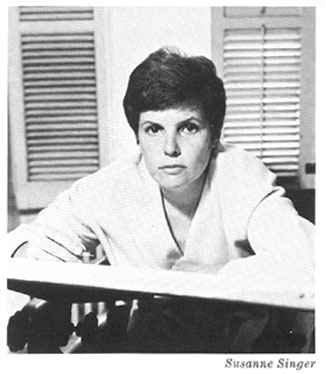 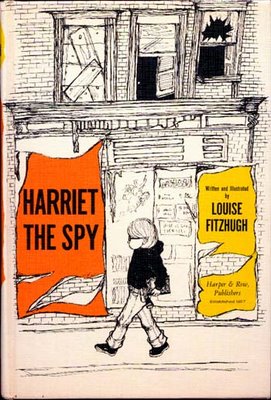 For my turn at Adventures in Feministory, I wanted to give props to the creator of a character that inspired girls to keep spy notebooks and make their own tool belts. A character that was every bit as unladylike as she was fond of gossip. A character who was unapologetically loud and rocked jeans and sneakers everyday. I am, of course, talking about Louise Fitzhugh and (my personal hero) Harriet the Spy.

Louise Fitzhugh was born on October 5, 1928 in Memphis, Tennesse. After her parents' divorce, she grew up predominately with her father and went on to attend three different colleges without obtaining a degree. She kicked off her short-lived writing career in 1961 with a beatnik parody of Eloise, titled Suzuki Bean. 1964 saw the introduction of Fitzhugh's most popular novel, Harriet the Spy. Fitzhugh's third novel, The Long Secret, was published in 1965, before the author died of a brain aneurysm in 1974 (at the age of 46). Several of her books were published posthumously, including Nobody's Family is Going to Change (1975) and Sport (1979).

Harriet the Spy has since won over fans because of its realistic and controversial depiction of girlhood, parenting (or lack thereof), and ill-mannered children. Harriet personified the childhood extremes of insisted independence and heartbreaking loneliness. With her parents preferring cocktail parties over family time, Harriet escaped into her journal and into the lives of those around her. From hiding out in dumbwaiters to peering into windows, Harriet insisted on knowing everything about everyone, regardless of how rude, entitled, and invasive that made her. A tomboy to the core, Fitzhugh presented a frank depiction of alternative girlhood. Though, not all are fans of our heroine. Harriet the Spy was banned from several schools. The reasoning? For teaching children to "lie, spy, back-talk and curse."

Well, from one loudmouth know-it-all to another, thank you Harriet and thank you Louise Fitzhugh. 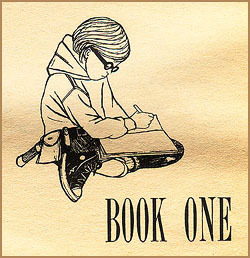 Thank you, Annalee, for giving props to a woefully underrated writer. Louise Fitzhugh was forthright, hilariously deadpan, and as observant as Harriet herself...As a kid I was heartbroken to learn that Fitzhugh had died; I wanted to be her best friend, since Harriet was presumably dragged off by her socialite mother to Biarritz or Basel.

And the artwork? Equally amazing.

Sure, Harriet was a tomboy, but do you remember the message of the book?

I skimmed a book on misogyny in children's literature, and noticed "Caddie Woodlawn Syndrome". It described the common pattern in girl's books of having tomboyish protagonists who learn how to conform and become women.

True Harriet is brash and tactless, a true tomboy rebel, but she is severely punished by her classmates when they find out about it. She is only accepted once she prints a retraction of her journal entry.

Take away message: if you want friends, you better learn to soften your blunt tendencies.

I have a different take. I don't think the punishment is geared particularly towards Harriet's tomboyishness. I think - and I think the book anticipates this from the very beginning - it enables Harriet to realize the limitations and faults in the ways she views other human beings, which Fitzhugh takes GREAT pains to show are often extremely inaccurate, superficial, and glib. Harriet isn't a faultless chronicler of truth - sometimes she sees people's flaws accurately, but sometimes she's just a really bad spy, verging on a "monster of incuriosity" (a term that's also been used to describe Nabokov's Humbert Humbert, himself a relentless "spy" who fails to see into his target's inner life). Think about all the times she fills her notebook with details of people's appearances, but utterly dismisses their inner lives ("she must be the kind of person you don't think about twice"). I can relate to this because, having been a young writer myself, and also known many young writers AND, in this day and age, young filmmakers, I know that a critical developmental stage in those art forms is the transition from being a hungry, predatory observer piling up notebooks (or footage) without grasping the humanity and autonomy of one's subjects, to being an artist who accepts the complexity and fundamental unknowability of those subjects. If Harriet really wants to be a great journalist and writer, she DOES have to mature the way she sees people. And I think she will.

Thank you jennyserene for an accurate view of Harriet's arc in the story. If you don't see her sudden grasp of empathy, not yet perfect yet growing, then you have missed the point of the book. Life is more complicated than she thought. But she retains her eagle eye for the story. I love this book.