I've mentioned before that my family is Puerto Rican, and while that is something I take immense pride in, I never really fully grasped the incredible history Puerto Rico has as primarily a possession of one world leading country or another. Recently, in my quest to find out more about this place (and to find people more exciting than Ricky Martin or Jennifer Lopez that created Puerto Rico's legacy) I didn't have to look much further than the first independence revolution of the 1860s. It was there I found a brazen revolutionary, Mariana Bracetti, who was integral to Puerto Rico's revolt and proclamation as an independent republic. 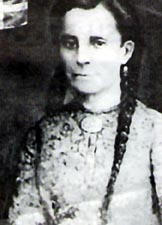 Bracetti was part of a secret network of revolutionaries who planned an uprising against Spanish rule among working class citizens like merchants, farmers and slaves. She was a follower of Dr. Ramón Emeterio Betances and Segundo Ruiz Belvis, who founded the Revolutionary Committee of Puerto Rico to incite said uprising. On September 24, 1868, Bracetti, her husband Miguel Rojas, his brother, Manuel, the Commander of the Liberation Army, and roughly 600 rebels raided and took over city hall in what became known as El Grito de Lares ("The Cry of Lares"). Previously, Betances suggested Bracetti knit a flag to be used for the Republic of Puerto Rico, which was raised in Lares' church to signify the revolution was underway. While it is somewhat annoying that a woman was commissioned to do "the women's work" it is amazing that what she created was ultimately the main symbol of this territory's independence from Spanish rule. Bracetti and nearly 500 other rebels were imprisoned in Arecibo for treason but later granted amnesty and saved from execution by governor José Laureano Sanz. The Grito de Lares did not win independence for Puerto Rico, but today Lares is considered the birthplace of Puerto Rican Nationalism.

Obviously a leader and a political rebel, Bracetti's legacy is honored in Puerto Rico and the United States, by Mariana Bracetti Plaza in New York City and Mariana Bracetti Acadamy in Philadelphia, PA. Just as in America's stories of revolution, it is always exciting to find out about the ladies behinds the scenes that ruffled some feathers and made shit happen. Viva Puerto Rico.

Hi! I am a puertorican too. Living in the island. And I want to immensely thank you for this. There are a lot of puertorican women who made history by her heroic acts. One is her. I think you would also like to read about Lola Rodriguez de Tio, and the poetess Julia de Burgos. Would love to read more about not only puertorican women through out history, but other latinamerican countries as well. Once again thank you and excellent work.

Another Boricua saying Gracias for this. I love the women of this era, she and Tio inspired me when I was little!