Lots of twelve-year olds are crazy about dinosaurs, and who can blame them? Dinosaurs are awesome. Rarely, however, does a twelve-year old come along who supports her entire family with her knowledge of dinosaurs, and then goes on to become one of the world's most influential fossil hunters. Mary Anning, the subject of this week's installment of Adventures in Feministory, did just that -- and more! Let's learn about her, shall we? 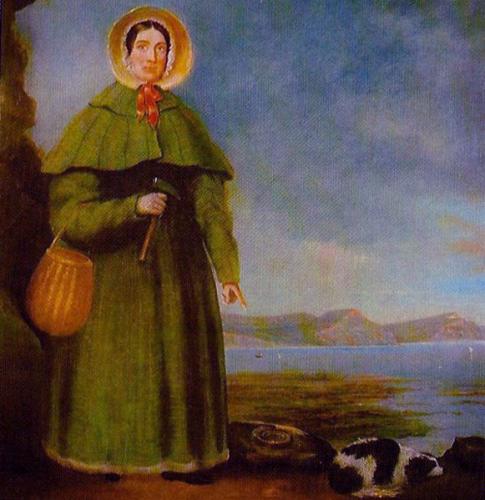 Born in 1799 in Lyme Regis on the Southern coast of England, Mary Anning started life off with a bang, literally. At fifteen months old, she was the sole survivor of a group of people that was struck by lightning. One of only two of her ten siblings that lived to maturity (yikes, England sucked in 1799), Anning took after her fossil-hunting father and was interested in dinosaurs beginning at a very young age. When he died in 1811 (see what I meant about England sucking back then?) Mary took over the Anning family bread-winning responsibilities by selling fossils she found in the cliffs near their home.

At the tender young age of twelve, Mary Anning discovered the world's first full ichthyosaur skeleton. As she grew older and her fossil-hunting skills became sharper, Anning also discovered the world's first plesiosaur skeleton, and several other important dinosaur fossils (including a pterosaur, for you paleontology nerds out there). Her discoveries blew the lid right off of the commonly held beliefs about dinosaurs during that time period, which stated that there was no such thing as extinction, and that any fossils found in the earth must be indicators of a species that was still walking around somewhere (just keep your eyes out for a T. Rex, kids!). Mary's fossil discoveries were so bizarre that no one could believe they still existed, and thus the theory of extinction was born. Check out these specimens (found by Mary herself!) to see why:

Of course, as a young woman in a man's fossil-hunting game, Mary Anning didn't quite get the recognition she deserved. She was underpaid for most of her specimens (remember that she had to sell them to support the remaining members of her family), and the Anning family might have starved to death had a wealthy fossil collector named Thomas Birch not decided to help the family by selling some of his own fossils (apparently fossils were like trophy wives or classic cars for rich dudes back then). Thanks to his support, Mary was able to continue the fossil work she loved, even though her gender and her lower-class upbringing caused people to doubt her abilities. Said one high-society dame (Lady Harriet Sylvester) after meeting Mary:

It is certainly a wonderful instance of divine favour - that this poor, ignorant girl should be so blessed, for by reading and application she has arrived to that degree of knowledge as to be in the habit of writing and talking with professors and other clever men on the subject, and they all acknowledge that she understands more of the science than anyone else in this kingdom."

Wow, a poor girl who was able to gain men's knowledge through reading and application? Thanks, "divine favour"!

Mary Anning continued her impressive work in the field of paleontology, despite the haters, until she died of breast cancer in 1847. Though she was relatively uncelebrated at the time, she has since been recognized for her efforts by establishments as diverse as the Natural History Museum, the novel The French Lieutenant's Woman, and the church of St. Michael the Archangel (which installed a stained-glass window in her honor). And, a tidbit for your fun-fact file: Mary Anning is also rumored to be the subject of the famous tongue twister, she sells seashells by the seashore.

So the next time you talk to a little kid who is dorking out about dinosaurs (or the next time you find yourself dorking out about them), remember Mary Anning and her amazing contribution paleontology. If it weren't for her, we'd probably still be clueless about extinction, keeping our eyes peeled for a bloodthirsty T. Rex hiding behind that scary tree in the backyard. Heck, we might even still believe women paleontologists should chalk their abilities up to "divine favour".

Talk about a cool lady! Why don't we learn about people like this?!?!? (Ok, maybe we know why...) Thanks so much for sharing!

Geez—I wish I would have known about her when I was deep in my fossil-hunter/paleontology phase.

This is my favorite thing ever!