Adventures in Feministory: Women in the U.S. Military 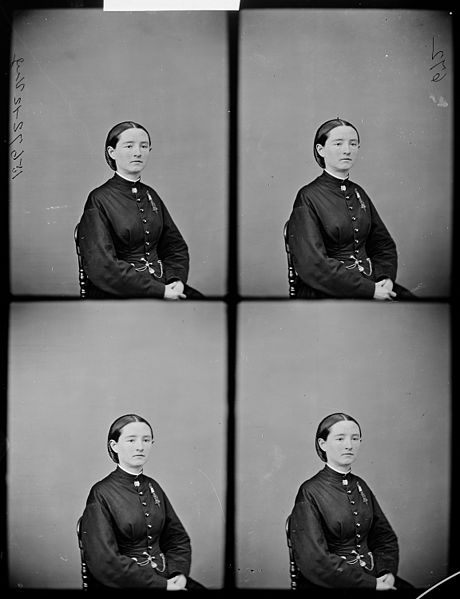 To commemorate Memorial Day, here are five women who revolutionized the country’s armed forces. These women may not be pop icons, but they certainly deserve time in the spotlight for their noted “firsts,” some welcoming, some not.

Elizabeth Newcom (also spelled Newcume) successfully joined the military in 1847 as a man by wearing men’s clothing. According to the Women in Military Service for American Memorial Foundation, Inc., or Women’s Memorial, Newcom enlisted as Bill Newcom in the Missouri Volunteer Infantry. It’s unclear if Newcom fought alongside fellow troops in Kansas, marched 600 miles from Missouri to Colorado in winter, or did both. What is clear is that Newcom was immediately discharged after the military discovered Newcom’s sex.

Newcom wasn’t the first, though. According to the US Department of Defense, Deborah Sampson fought as Robert Shurlief in the Revoluntionary War. Sarah Rosetta Wakeman  was Lyons Wakeman, fighting in the Union Army during the Civil War. Nothing like a little mid nineteenth-century gender-bending to serve one’s country, eh? The date of Newcom’s death is uncertain.

Born 1832 in upstate New York, Dr. Mary Walker was the first (and the only) woman to earn the Congressional Medal of Honor, the highest award given in the US Armed Services.

According to the National Library of Medicine, her parents encouraged her and her four sisters to attend college. But, after earning her teaching degree, she challenged the status quo and enrolled in Syracuse Medical College. In 1855 she earned her doctorate in medicine. A private practice and marriage, however, didn’t stop her from wanting to volunteering in the Union effort when war broke in 1861. She provided medical assistance to wounded soldiers, starting out in a temporary hospital in Washington, D.C. Then, Dr. Walker was appointed surgeon in an Ohio regiment. It’s also said that she was a prisoner of war—the Congressional Medal of Honor Society notes her POW period as being four months in 1864.

In late 1865, President Andrew Johnson awarded Dr. Mary Walker the Medal of Honor. Controversy about the medal’s purpose and its “deserving” recipients arose decades later and the government removed Dr. Mary Walker’s name (because she didn’t serve in combat). President Carter restored her medal in 1977, fifty-eight years after her death in 1919.

Dr. Mary Walker was also a progressive on the topic of women’s dress during the 1850s and later in the 1870s. She sported the dress & trouser look and bloomers for many years until the late 1870s when she opted for men’s clothing instead. Dr. Walker had this to say about women’s dress in 1897:

I am the original new woman […] when [Lucy Stone, Mrs. Bloomer, Elizabeth Cady Stanton, and Susan B. Anthony] began their work for dress reform, I was already wearing pants […] I have prepared the way for the girl in knickerbockers.

Loretta Walsh was the first women to enlist in the US Navy’s military unit (that’s not Loretta, by the way, in Howard Christy’s 1917 poster). Loretta was eighteen when she enlisted in 1917, taking an oath to fulfill duties as Chief Yeoman. Loretta’s enlistment hit the headlines days after. In a Special to The New York Times, published March 22, 1917, she is noted as passing the same exam extensive exam as men for the position as Yeoman. Commander Payne said this of Walsh:

She was a fine specimen of womanhood, and that the Navy would be proud of her.

She is said to have earned a whopping $28.75 every month, according to Yokosuka US Naval Base staff in Japan. She finished her naval duties in 1921 and passed away in 1929. She was twenty-nine years old.

When Annie Graham got to Parris Island, South Carolina to be “made into a Marine,” she didn’t know she had made history. According to her daughter Stephanie, Annie got the news that she was the first black woman to join the USMC in 1949. And though she worked her way up the ranks to become sergeant on base, she continued to be subjected to flagrant discrimination and racism off-base. She was discharged in 1952, just three years before Ms. Rosa Parks refused to move to the back of a city bus in Montgomery, Alabama.

Interestingly enough, Anne E. Lamb was the second black woman to join the USMC, a day after Graham. The two women trained together at Parris Island—that’s Graham on the left and Lamb on the right in the photo above. According to a Camp Bendleton Marine Corps Base article, Anne Grimes became the third black woman and the first to retire after twenty years of service. Is it pure coincidence that these women all shared a similar first name? Hmm…

Annie Graham died in the summer of 2002.

Born in Puerto Rico and raised in New York City, Carmen landed a job at the War Department in Washington, DC as a payroll clerk. In a 2002 interview for the Voces Oral History Project , she recalls her excitement about joining the Women’s Army Auxiliary Corps (WAAC) - Women’s Army Corps (WAC) today. In 1943, two months after completing her training in the 149th WAAC, she was sent to Algeria. She became the first Latin woman in the US military to be stationed overseas. For eighteen months, Carmen transmitted encoded messages to the battlefield.

In that same Voces interview for the University of Texas at Austin, Contreras had this to say about spending nights on top of a hotel roof watching artillery fire overhead in Algiers, Algeria:

We were never afraid. Some girls were scared, but I never was. That’s when I was young and foolish.

Sounds to me, Ms. Contreras, like that’s when you were young and learned to do things your way.

After Algeria, Contreras went to work for a short time in Italy. She was discharged in 1945 as a Technician 4th grade. She has earned several medals for her military service including a WWII Victory Medal. At 91, Carmen Contreras Bozak is said to still be going strong.

Lori Piestewa was the first woman killed in Iraq in 2003. She is also considered to be the first Native American woman to have lost her life in foreign combat. A member of the Hopi Tribe, Lori was active in her high school’s ROTC. She was twenty-one when she enlisted in the army, but not the first in her family to do so—her father and grandfather both served in Vietnam and WWII, respectively.

When Lori enlisted, she had been raising two young kids by herself in Tuba City in Northern Arizona. Although Piestewa is not the first Native woman to serve, she was the first to receive widespread national recognition. At the time of her death, the country’s first exhibit on Native American women in the US military was being put together at the Women’s Memorial in Arlington, Virginia. Voices: Native American Women in the U.S. Armed Forces, opened in May 2003. Piestewa’s family and children attended the opening ceremony that honored Lori and five other notable Native women who served in the US military.

According to 2010 statistics from the Women in Military for America Memorial, 1,840,380 women have served in the US military. The number of women is likely higher though, since earlier records are either incomplete or unknown. If you know of someone who should be mentioned—historical or familial—please leave a comment .

Here’s an old-timey clip about the Women’s Army Corps from “The Big Picture,” a US Army TV series on ABC that ran from 1951 to 1964. In this ‘54-ish clip, WAC highlists “high fashion” and calisthenics in knee-length skirts… Sigh! Where was Dr. Mary Walker when WAC needed her most?

... "Camp Bendleton" should be "Camp Pendleton Marine Corps Base article." Silly typo! Thanks to our reader, Melissa, for pointing this out.