I think this year is the first time President’s Day has felt worth celebrating! Considering the historic nature of our country’s first African-American President, here are just a few other ground-breaking American political campaigns. 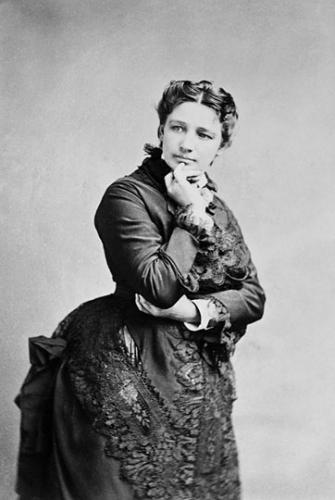 Victoria Claflin Woodhull
Ran in: 1872 for the Equal Rights Party Victoria is credited as being the first woman to run for President, which is saying a lot since women didn’t even have the right to vote when she put her name on the ballot. The Equal Rights Party catered to a variety of people: laborers, suffragists, spiritualists, and communists. Frederick Douglass ran as Vice President!
Fun fact: Woodhull spent election day in jail! The Comstock Law (which intercepted a ton of twentieth-century birth control) conveniently caught an article about an acquaintance’s affair. 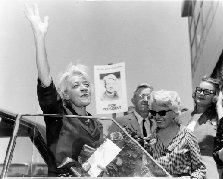 Margaret Chase Smith
Ran in: 1964 for the Republican Party Smith was the first woman elected to the US Senate and came in second to Barry Goldwater at the ‘64 Republican National Convention. Sherman’s biographer wrote: “She was always having to walk that tightrope between being strong enough and tough enough to be commander in chief, to run a country, but still feminine enough and ladylike enough … because being feminine was absolutely essential. And so she tried to balance it the best way she knew how.”
Major Burn: Margaret became an early adversary of Joseph McCarthy by delivering a “Declaration of Conscience” and got called “Moscow Maggie” from then on by his nasty staff. 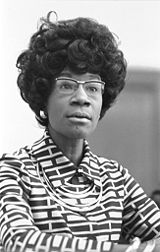 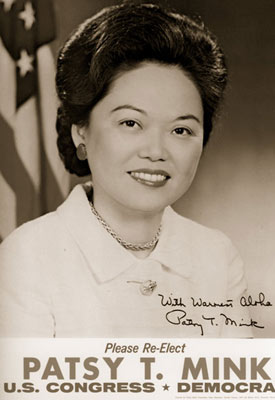 Patsy Takemoto Mink
Ran in: 1972 in the Oregon primaries When Mink was denied entry into twenty medical schools because she was a woman (despite her degree in chemistry and zoology), Mink attended the University of Chicago Law school and then began her own firm in Hawaii in 1951. She was elected to the Hawaii senate in 1958 and made it to the US House of Representatives in 1964. Mink’s political career continued and she supported and advocated for minorities, women, children, and immigrants. Worked to pass Title IX, and was the first woman of color in Congress.
You go, girl: Mink was the first girl in her high school to run for student body president and won after “garnering support of the popular football team.”

These are only four of the many women who have run for president, not to mention the numerous (non-American) female heads-of-state all over the world (and history!)! Anyone feel like open thread for discussing other women contenders and leaders?

"When Mink was denied entry into over twenty medical schools because she was a woman (despite her degree in chemistry and zoology)..."

As a Hispanic female medical student, that line just made my jaw drop. Twenty? Twenty?!!!? WTF? And this wasn't even that long ago! And my class now is over half female! Damn.

Now those are some presidential ladies worth celebratin'.

This is a great, if brief, piece of history. To bring it to the present, don't forget the double-female 2008 ticket of <a href="http://www.gp.org/2008-elections/index.php">Cynthia McKinney and Rosa Clemente</a>.

Besides the one from Alaska we heard all about last year ... there was the Walter Mondale/Geraldine Ferraro ticket back in, I believe, 1984.

yep, Palin and Ferraro are the only two women to win the Vice President nomination from a major political party. and double yep, McKinney and Clemente are the shit!!

I'm ashamed to say that most of this was new on me. Thanks Kjerstin, this was so great to read!

I am happy to be educated here! I'm shocked, of course, at some of what these women faced, but I'm also thrilled to know these women were a part of our past. What kind of world would we have today if some of these denied bids for office had been, instead, passed and approved? Interesting and intriguing to think on, IMHO.