For all of the respect and notoriety tied up in the name “Sappho of Lesbos,” little about the Greek poet’s life is known for sure. Born around the year 615 B.C., Sappho was a teacher at an academy for unmarried women who became well-known for her wide collection of emotion-laden poetry. Based on surviving writings, she is suspected to have married and had one daughter, Cleis, before her death around the year 550 B.C.

Even in the male-dominated world of classic literature, Sappho has long been considered one of the greatest lyric poets of all time. The scholars of Hellenistic Alexandria named her (in the company of eight men) as one of the nine melic, or musical, poets worth studying, and in a loaded compliment, Plato famously dubbed her “the tenth muse.” She served as the inspiration for countless paintings and sculptures, but unlike the mythical muses, Sappho did not exist to facilitate anyone’s art but her own.

Sappho was simultaneously a poet and a songwriter: Many of her works were intended to be sung with accompaniment of a lyre, hence the term “lyric poetry.” Her writing differed from other popular verses of her day in that it mostly addressed passionate relationships between humans rather than gods or epic adventures. It often had a melancholy tone. The typical rhythm of her verses proved so distinctive that it became known as the “Sapphic stanza,” or, musically, the “Sapphic meter.”

Yet for all the praise it gathered even in her own time, most of Sappho’s poetry has been lost. While it’s impossible to know the details of her personal life, the fact that Sappho’s romantic-seeming poems used female as well as male pronouns drew the ire of powerful men in the eleventh century, who organized mass-burnings of her work. Some scholars suspect the involvement of Pope Gregory VII. Published as they are, most of her “poems” are actually fragments derived from writings by other people who quoted Sappho. Luckily, even this is enough to fill books.

Despite her ambiguous history, Sappho is perhaps best known as a lesbian icon. In addition to being immortalized as a meter, she has left her mark on the English language via major players in the QUILTBAG lexicon. The word “Sapphic” is often used as an adjective for women who love women, and the word “lesbian” was taken from the Island of Lesbos due to its close-knit groups of women during her time. (In 2008, three residents of Lesbos even filed a lawsuit against the Homosexual and Lesbian Community of Greece in hopes of forcing a name-change. Calling the word “insulting,” the group appeared to have hopes of breaking the connection between the term “Lesbian” and “certain ladies” altogether. The case was dismissed.)

It’s hard not to wonder what Sappho would make of her lasting reputation, but it’s easy to understand why her recovered verses have stood the test of time. The Greek woman’s way with words was lovely, poignant and musical, even without a lyre as its partner: I have not had one word from her

Frankly I wish I were dead
When she left, she wept

a great deal; she said to me, “This parting must be
endured, Sappho. I go unwillingly.”

I said, “Go, and be happy
but remember (you know
well) whom you leave shackled by love

“If you forget me, think
of our gifts to Aphrodite
and all the loveliness that we shared

“all the violet tiaras,
braided rosebuds, dill and
crocus twined around your young neck

“while no voices chanted
choruses without ours,
no woodlot bloomed in spring without song…”

Pompeiian fresco of Sappho by an unknown artist; photo via University of Texas at Austin.

I recommend checking out Anne Carson's translation of Sappho ("If Not, Winter"). Carson translates the fragments left behind, instead of imposing what she thinks the poem was in its entirety (which is what other translators do). Her translation is gorgeous.

Some scholars debate whether Sappho was actually married or whether it was a joke (her husband's name translates to Prick from the Isle of Man).

I saw pictures of this woman all over temples and cathedrals when I was in Rome and was immediately captivated. Who was this woman so important to be carved into stone but erased by the pages of my textbooks? I tried looking her up and didn't find much at all, so this is wonderful!

Relevant: This Is Why I Write 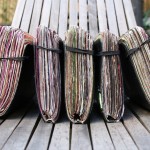 by Ana Valens
I'm attending a first-ever workshop for all trans women. Having that space is so, so important.