Reggie Jackson. Wilt Chamberlain. Frank Gifford. Pete Rose. What do these guys have in common? Besides their dexterity with various kinds of balls, they were, in 1978, among the familiar faces bought and swapped on trading cards.

They also weren't women, a fact duly noted by 8-year-old Melissa Rich, an avid collector of trading cards who had something of a feminist awakening when she noticed that her baseball cards were skewing really, really, male. She brought this to the attention of her mother, Lois, who in turn consulted with her sister, Barbara Egerman, and soon enough the idea for a series of trading cards highlighting the achievements of women was taking shape. The sisters realized how crucial such a project could be when they asked Melissa and her peers to each come up with a list of five women they admired. The pickings were slim; Lois Rich reported that the younguns seemed ignorant of any woman who wasn't married to a president or on television. So the women came up with their own list: 500 successful women in all manner of professions, from politics (Bella Abzug, Shirley Chisholm, Pat Schroeder, Barbara Mikulski) and journalism (Katherine Graham, Helen Thomas, Lucinda Franks) to sports (Rosie Casals, Laura Lee Ching) and the arts (Meredith Monk, Ruby Dee), as well as a handful of icons like Rosa Parks, Gloria Steinem, and Helen Reddy. The backs of the cards offered short bios, autobiographical marginalia ("Jane Bryant Quinn enjoys reading, gardening, birdwatching, and spending time with her husband and two sons."), and bits of Supersisterly wisdom. Ms. editor and Free to Be…You and Me cocreator Letty Cottin Pogrebin entreated, "Sisters: Think of all the things you could do if you were born a boy—and do them anyway!"; radical feminst, Sisterhood is Powerful editor, and future Friend of Bitch Robin Morgan offered, "Children, female and male, must understand that they can change the world...Start now, each day, working for equality and freedom. (P.S. It's fun, too!)" In 1979, with a grant from the New York State Education Department, the women printed up a small initial run that was distributed in local schools. Teachers seemed thrilled to have examples of contemporary heroines to share with their students, and the cards were wildly successful. "Even men have ordered sets," Rich told the New York Times, perhaps inadvertently reflecting the very attitudes about women's cardworthiness that necessitated the project in the first place.

A 1980 article in People magazine revealed that not everyone was thrilled about becoming a Supersister — both NOW's Ellie Smeal and puppeteer Shari Lewis refused to reveal their ages on their cards; Jane Fonda blew the creators off entirely. (Perhaps 9 to 5 was her atonement?) But the Supersisters were undeniably a success — the 10,000 sets printed sold fast, and Rich and Egerman planned a second set with all-new Supersisters. That second set never happened, and trading cards went back to being about dudes and their stats —though their spirit lives on in such contemporary projects as Drag King trading cards and Reclaim the Media's set of "Media Heroes" cards that includes such definitely-would-have-been Supersisters as Jean Kilbourne. For now, the cards are a fun footnote of second-wave feminism, an amazing snapshot of inspiration and optimism that, if you're lucky (or, like me, happen to have a mate who's a trading-card collector), you might be able to score on eBay and enjoy forever.

This post originally appeared on the Bitch blog in April of 2009, but with the holiday shopping season coming up we're publishing it again—you never know when you might get lucky and find a set!

I LOVE these! Isn't it time for Supersisters of the new millennium?!

Who's in favour of reviving these?

These are wonderful - I would have loved them if I'd seen them as a girl growing up around that time. Another modern trading-card project is Geek-A-Week, celebrating heroes of geek culture, including several fascinating and accomplished women.

I ordered my set when I was in middle school (Jr. High, back in the day!). They were inspiring. I recently found them and gave them to be college bound daughter. A hoot to see how old fashion they seem now.

Really, though, this is absolutely fantastic. I would love to see someone pick up this project again. 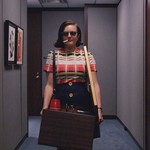