Adventures in Feministory: The Flygirls of WWII | Bitch Media

Adventures in Feministory: The Flygirls of WWII

First of all, I can't say that I ever thought I would be writing about WASPs for one of our Adventures in Feministory! Before you close this tab, stick with me (my story gets better)! I'm talking about a whole new kind of WASP, one that actually belongs in the air. 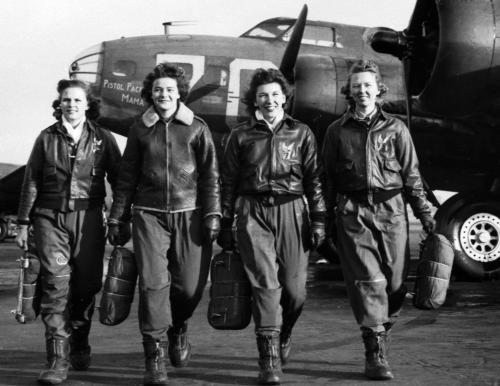 While this is not our first Feministory focused on feminists in flight, the Women Airforce Service Pilots (WASPs) have only recently gained celebrity. NPR's All Things Considered recently reported

President Obama signed a bill Wednesday granting the Congressional Gold Medal to a group of women most Americans have never heard of: the Women Airforce Service Pilots, or WASP... But even though they wore uniforms and worked on bases, they were never considered members of the military. Their contribution to the war effort was so controversial, in fact, that all records pertaining to their service were sealed and deemed classified in 1944. That pretty much consigned the WASP to the dustbin of history for decades.

This recognition appears to be due in good part to the efforts of Deanie Parish (a WASP herself) and her daughter, Nancy. These two have been at the forefront of pursuing the Congressional Medal of Honor for the past 10 years, in addition to creating the Wings Across America organization.

Wings Across America attempts to preserve the stories of women in the airforce, hoping to give "the opportunity to [each WASP to] share her own eyewitness account of her service to her country in the privacy and comfort of her own home. Each and every story is important and focuses on her entire life." Our knowledge of these trailblazing (skyblazing?) women is because of this project's effort and the support from Maj. Nicole Malachowski, a current fighter pilot in today's Air Force and the first woman to fly in the ultra-elite Thunderbirds.

So, flygirls, this Adventures in Feministory goes out to you!

ah yay for the WASPs!! So glad they're getting their acknowledgement. I remember reading about them when I was around 8 years old in one of my American Girl magazines. My Dad was an Air Force pilot as well and it was so cool reading about awesome women who did his job.

I sent this link to my grandpa who was a fighter pilot in WWII and he said the story about the nun on the Wings Across America website made him tear up. He married a nun after all (my grammie!), so that story was especially poignant for him. It's so wonderful to see things come full circle.