Adventures in Feministory: The Monie's in the Middle | Bitch Media

Adventures in Feministory: The Monie's in the Middle

Climb aboard our little time-traveling contraption and set the dial to the year 1990, friends, because we are going on a little ride to the past. Of course, 1990 isn’t all that long ago—one could barely consider it history in most cases—but keep in mind that in hip-hop years, two decades is like two centuries.
Indeed, 1990 was the year that of my favorite hip-hop artists of all time, Monie Love, released the single “Monie in the Middle,” which to this day is so infectious, I need and extra dose of Zithromax just to get it out of my brain, ya’ll!
More important than the song’s admirable merit as a pop song and its general jamitude (yeah, I just make that word up), however, is its place as one of the first hits ever for a female emcee: Love is one of a trio of ladies who braved the testosterone-laced waters of early hip-hop and produced some of the best singles to come out of the genre’s first couple of waves. Queen Latifah’s “Ladies First,” featuring Love, and Yo-Yo’s “Can’t Play with My Yo Yo” are two other notables (they came out in 1989 and 1991, respectively).
“Monie in the Middle” came off Love’s critically lauded debut album Down to Earth. The song—and its corresponding video—plays off the sort of semi-innocent high school romance themes that DJ Jazzy Jeff and the Fresh Prince were known for, but Love’s lyrics and general fierceness turn it into something much more than a throwaway pop song (though it definitely has merit as a plain old dancefloor jam). The theme is pretty basic: Love is being pursued by a player (or at least someone who thinks of himself as a player), but she’s into another guy. The lyrics consist of her putting the former in his place. As the first line goes:
Brother, what is with you?
Can’t you take a hint?
Her voice (literally and metaphorically) from the get-go is strong and firm. Her stance is simultaneously casual and unmoving (also literally and metaphorically). She goes on, making her point clear:
You and me were never meant to be
Your homeboy likes me
I like him too—get out tha picture
Throughout the song, Love hammers it home: She has her own desires, she will follow them how she sees fit. She’s young, confident, and in full control of her own destiny, especially in the context of her relationship.
Love, Latifah and Yo-Yo spawned an entire legacy of brilliant lady rappers: Of course there’s Missy, et. al., but Lady Sovereign and Jean Grae leap to mind too, and they are all so fascinating, they’re worthy of some intense examination—which I plan to do in a future blog post (be ready for about a billion YouTube videos). In the mean time, though, enjoy the fabulous Ms. Love, who schools ‘em old-school. 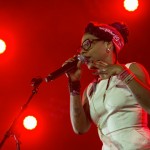