Adventures in Feministory: Women's Comics of the '70s and '80s | Bitch Media

Adventures in FeministoryWomen's Comics of the '70s and '80s 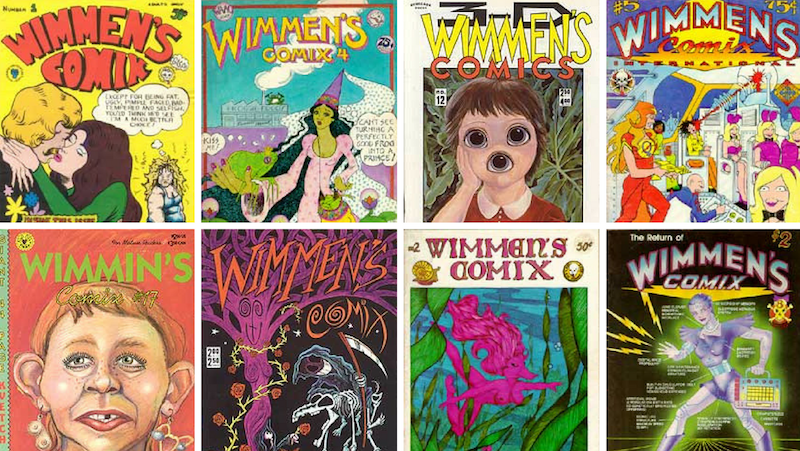 This story was originally published on April 6, 2009

When most people think of underground and alternative comics, Robert Crumb’s Zap Comix or Art Spiegelman’s and Bill Griffith’s Raw may come to mind. But San Francisco was home to more than a few alternative cartoonists, and when women such as Trina Robbins found out what a boy’s club the underground scene seemed to be, they took matters into their own hands and published a collectively edited women-only comic book.

“It Ain’t Me, Babe” was published in 1970 and was the the first ever comic book composed entirely of women, and while it remained a single comic and not a series, it was the impetus to start the series Wimmen’s Comix, which debuted in 1972, and would continue until 1992.

The comic was run as a collective, or as Terry Richards, one of the founders, says more precisely, “We decided that we would produce an on-going title of comics by women and that we would function as a collective, a term used rather loosely in those days to mean there would be no leader or editor, but instead a rotating editorship, with everyone contributing their energy to the paperwork and general supportiveness of the group.”

The content of Wimmen’s Comix dealt with feminist issues such as sexism and abortion, and when Roberta Gregory came aboard, lesbianism. But as Lee Marrs (creator of Pudge, Girl Blimp) said “We would try for artistic quality, story coherence, although so many of us were beginners. There was to be no feminist line, no theme restrictions. The deal was for everyone to do what turned them on or pissed them off. We wanted to show women as they really are.”

Although the comic ran for twenty years, only seventeen issues were produced in that time period (browse covers here!). However, the advent of all-women published comics inspired publications to come. Dyke Shorts, Tits & Clits (started by Joyce Farmer and Lyn Chevli), and Twisted Sisters all emerged. You could find the same network of women comic artists contributing to several of the series too!

Nice, I love these old comics!

I can't even remember how I came upon Bitch, but am glad that I did. Out here in the UK I have never come across anything like it, and I find it amazing that, at age 29 I had no concept of there being anything like the kind of feminist magazines that Bitch and its cousins are, and certainly no idea that there had been things like fem-animators (if you will).
I just think the fact you girls are getting this kind of stuff out there is amazing, and thank you for it!

They're not yet as big or shiny as Bitch or Bust but it's a start!

I had seen twisted sister, but not the others. thanks for showcasing such great artists and mediums-I will can't wait to check out the other artists.

I'm actually in the early stages of editing an anthology of the best of Wimmen's Comix with the help of Trina Robbins. It will be published by Fantagraphics - so stay tuned!

"More of this stuff needs to be re-published or anthologized"

I agree! There is definitely an audience for this material - - one comprised of fans and scholars (and scholar-fans!). I'm really surprised Wimmen's, Tits 'n' Clits, and so on haven't been anthologized. I was also disappointed that women's contributions to underground comix tended to be marginalized to single chapters in histories of Underground Comix (even though many of them are very good chapters).

Again, this is the VERY EARLY stages of the project - but I'm really excited about this collection and its historical importance, and will definitely keep Bitch in the loop!

Thank you for posting this :)
I'm working on a piece of writing about European grassroots comics at the moment, and seeing these American examples has just re-inspired me.
Thank you x

I'd be very interested in reading this - where will it be published?

If accepted, it'll be a chapter as part of a book on European Feminist Grassroots Media; an offshoot project of this website: http://www.grassrootsfeminism.net

Under the name, Luna Ticks, I was a contributor to many underground comics in the 80’s including “Tits & Clits” and R. Crumb’s “Weirdo” but mostly to hundreds and hundreds of small self-published zines around the country.

An interesting attitude of the times was that many young, hip women considered ANY type of depiction of naked women to be sexist. I didn’t feel that way. I felt drawing sexual images was empowering. It was a troubling time; there I was, penning what I considered to be a feminist comic series only to be blacklisted by most of the intellectual-feminist publications of the 80’s.

My work was even censored by the Tits & Clits (#7) editor. I saw it as a clash of new school punk (me) vs old school hippie. My work was political and sexy. The original post-apocalyptic story I submitted was declared too ‘weird’ and I was asked to submit a new idea – because they really wanted to support me in this time of censorship (by censoring my story?!). I came up with a new story that was fluffier and I was in, no problem. But it left a bad taste in my mouth.

I also did comix for Al Goldstein’s “Screw Magazine.” My niche was reversing the roles in stereotypical sex jokes. Ex: “Joan, I heard you and Ted were doing it doggie style last night” Joan: “Yeah, I was begging, Ted was playing dead.” [Ba boom.]

I felt like the Anais Nin of comix. It was really fun, exciting and sexy to be playing with the big boys and messing with their minds.

These are great and I am glad they exist. But why is it that women's mags and specifically lesbian mags are always so damn wordy while men's mags get the great photos? Pick up almost any gay men's magazine or comic and it is all about sex. Pick up a woman's mag or comic and they may talk about sex but if there is an accompaning picture it is so artistic as to be unrecognizable as a naked woman. Even so called dyke sex mags like On Our Backs has very few women on their backs. What is the deal?

There everything, that enters into the minimum set of the American - and pride of the history (it is not important what it was - important what it see the majority of Americans), and actual at them there problems of feminism and a racial inequality and, certainly, a victory of all American society, from Indians to white businessmen, over "a harm axis".

Feminism sources can be dated the end of 18th - the beginning of XIX th century when the opinion that the <a href="http://marika-barbie.blogspot.com/">woman</a> occupies oppressed position in a society, in which centre costs the man, began to receive more a wide circulation. Feminist movement originates in reformatory movement of the western society of XIX th century.

Here still to find where these comics... In general It was healthy...
Pictures so in general like.

We saw, how mass media have made so that the women's movement and feminism seemed trivial, silly, selfish, naive and-or mad in the industrialized countries, simultaneously practically denying its existence in the countries of the third world. The western feminists have represented as the bras thinking only about burning having sex, hating men and-or aspiring to head GM. Such stereotypes ignore work of the majority of feminists and deform even those some kinds of activity on which inform mass media. So, for example, when women shared experience that means to love themselves in a society hating women, are have turned inside out and have presented as "hatred" to men. Or those demonstrations on which women rejected shoes on high heels, cosmetics or bras as symbolising the control of men over female self-determination and development, represented without their political maintenance.

Thus, to women for whom on the first place there were hunger and housekeeping questions, inspired, that the western feminists these themes do not interest. In the same way attempts of mass media to represent all feminists as exclusive elite in each country are directed on isolating us from other women. I often think, that the proof of original force of feminism that more and more women join it, despite prevailing efforts to deform it and to keep from it women.

Relevant: The New Stonewall Film is Just as Whitewashed As We Feared 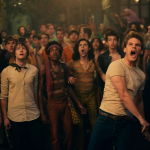 by Leela Ginelle
A film about Stonewall could have put people of color front-and-center where they belong.