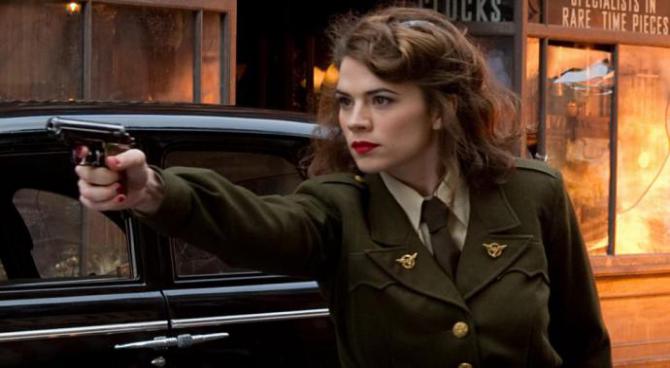 This show is a big deal because Agent Carter is the first woman-led installment in Marvel’s popular cinematic universe. How it fares among audiences will doubtless shape the future of Marvel’s film and television choices, including the upcoming Netflix series A.K.A. Jessica Jones and the Captain Marvel movie, which is slated to star Carol Danvers as the title role in 2018. Despite ongoing demand from fans for more representation of women in Marvel’s superhero movies, these are currently the only upcoming projects that center on female characters. So it feels like a lot is riding on Agent Carter‘s shoulders. Will Agent Carter, with its action-packed plot, help solidify the idea that women can helm successful superhero stories, too? Or, if the show is unpopular, will industry critics use it as fodder to continue the male-centric status quo at Marvel?

If the first two episodes are any indication, the answer is yes… and no. Yes, Agent Carter’s greatest asset is that she’s a heroine who can outsmart and outpunch any baddy. But while she’s the main character, Peggy is pretty much the only woman in the show.

In the premiere episode, Peggy is everything we’ve come to expect from the cunning Agent Carter: she’s smart, she’s daring, and she’s able to fight off a group of henchmen while wearing spectacular heels. She cracks cases faster than her male colleagues and seems guaranteed to always outwit whatever villain the show writers dream up for her each week. Best of all, in the premiere episode she faces sexism head on, defiantly standing up for herself in an office full of retrograde male agents. She can hold her own against any Marvel hero, and the show isn’t afraid to remind you of this.

But where are the rest of the heroic women in Agent Carter? It seems Peggy is a singular exception in Marvel’s vision of 1940s America. While male co-workers, partners, and nemeses abound in her heroic double life, women are relegated to roommates and waitresses. They’re given limited screen time and even more limited agency. Worse, they are used as little more than props in Peggy’s story: women whose only roles are to evoke an emotional reaction, prove her valor, or act as a comedic foil. Mild spoilers ahead. 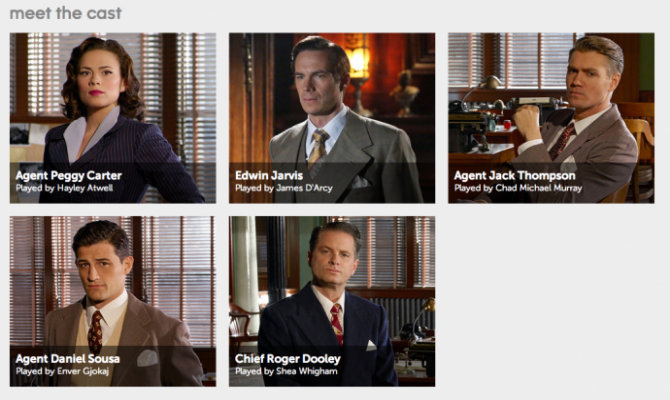 First, there’s roommate Colleen, who is struggling to hold onto her factory job as G.I.s return from the war. She might have been an interesting lens to view the displacement of women in the post-war workplace, especially in contrast to Peggy’s own struggles with sexism.  Unfortunately, she died in the first episode so Peggy could feel bad that her job as a spy gets the people she loves killed. Instead of being a real character, Colleen is just a plot device. Like many male action heroes before her, it seems Peggy can’t grow or reflect without a dead woman in her path.

Then there’s Angie, the waitress determined to be Peggy’s friend. She’s spunky and regularly deals with sexual harassment in the workplace, including a disgusting butt pat from a belligerent diner in the first episode. Angie is seemingly powerless to do anything about the harassment. Instead, her victimhood creates an opening for Peggy to play the protector. Agent Carter swoops in to scare the offender off with comical violence, and Angie is none the wiser.  At first glance, it seemed Peggy and Angie’s relationship might be the show’s opportunity to make a point about women’s friendships and solidarity. Unfortunately, at the end of the second episode, Angie calls another woman a “slut” as a punch line, effectively ruining the potential message.

Finally, there are a few moments dedicated at the end of episode two to Peggy’s new landlady, Miriam. Miriam is a prudish middle-aged woman determined to preserve her tenants’ modesty through curfews and “appropriate” attire. It feels like she’ll be a two-dimensional foil for Peggy’s adventurous, independent lifestyle, the woman who wants to see her female charges demure, married, and most certainly not fighting international terrorist organizations.

All three women serve a purpose in Peggy’s life: to be a victim or a comical threat. By sticking to the standard, typically male-driven action hero formula, every other woman is reduced to a prop in Peggy’s story. They die, need protecting, or are unintentionally in the way of her triumph. It would be nice if Agent Carter wasn’t the only complex female character on the show, right? Alas, Peggy is the only woman who exists in her secret world of spies and superheroes. There’s no female sidekick, partner, or confidante. Instead, that role is given to Howard Stark’s prim butler, Jarvis.  All the villains so far have been men as well.  Marvel seems to be sending a clear message: not only is there no woman who is Peggy’s equal, they can’t even inhabit her superhero world.

Meanwhile, the male characters feel, for the most part, just as flat as Peggy’s female friends. The majority of men in the show are buffoonish chauvinists, dim-witted and loud-mouthed. Their brand of sexism—mostly in the form of demeaning comments and sexual harassment—is particularly noxious, but it’s not subtle. In Agent Carter, sexism is usually played for laughs because we all know Peggy doesn’t fit their vision of her. Throughout the first two episodes, Peggy puts on a variety of acts to fool the parade of chauvinists that march through her life. And while it can be fun to watch Peggy triumph over them again and again, it’s also predictable. It feels significantly less funny part because no woman other than Peggy succeeds over these men. Colleen dies, Angie needs Peggy to scare away her harasser, and Miriam buys into internalized patriarchal ideas about women’s behavior. They are all, in some form, victims that exist to showcase Peggy’s exceptionality.

My hope is that this will change in future Agent Carter episodes. But right now, it feels like the representation we’ve all been hoping for is only partially there. While Peggy herself is great, she is still portrayed as the only woman who is capable enough to fight in the high-stakes, male-dominated world of spies, terrorists, and everyday sexism. Unless they’re a superhero who can battle their way into the boy’s club, women are victims.

What’s frustrating is that it doesn’t have to be this way. There is room for lots of women in the Marvel cinematic universe: civilians, superheroes, and villains.  Ultimately, there need to be more leading projects, and more roles for women to support other women’s stories as well-rounded characters in their own right.

Related Reading: We Talk With the Writer of the All-Women X-Men Series.

Kelly Murray is a gamer, developer, and superhero in the making. She regularly blogs at Princess vs Peril.

Kelly Murray is a writer, developer, and firebrand. She's into superheroes, cats, and coding literacy.

" these are currently the only upcoming projects that center on female characters." From Marvel Studios (i.e. Disney) There are 3 other major studios putting out Marvel and DC comic movies.

Warner Bros has DC comics and they have a Wonder Woman movie on the books.
Fox has Marvel's X-Men and Fantastic Four and did cast Michael B. Jordan as Johnny Storm in a story where Dr Doom is a hacker.
Sony has Marvel characters related to Spider-Man and did announce in August that they would do a female led movie. Which could be Spider-Woman or Spider-girl (Ms. Mr.) or Black Cat (Marvel's version of Catwoman) or Silver Sable (lame). They might have traded in those plans for their own version of Agent Carter featuring a young Aunt May, but if their plans with Disney go forward to co-produce future Spider-Man movies and allow Spider-Man in captain America 3, then the Aunt May movie is off the table.

Secondly, I feel they have given the waitress room to grow. The point of episode 2, as the butler is tending to her wounds is that Agent Carter can't defeat Leviathan by herself. Angie pushed Agent Carter into moving into her building, and there will be a few episodes of Agent Carter trying to keep her secret identity from Angie, but soon the beans will be spilled and Angie will at first know, and then sneak along ala Huey Dewy and Louie into the adventures. And by the end of season 1, Agent Carter will have her own team of Scoobies. 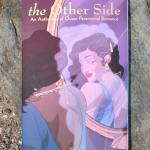