The Lady Is A Tramp: Aiyana Stanley-Jones at the Altar of the Media | Bitch Media

The Lady Is A Tramp: Aiyana Stanley-Jones at the Altar of the Media 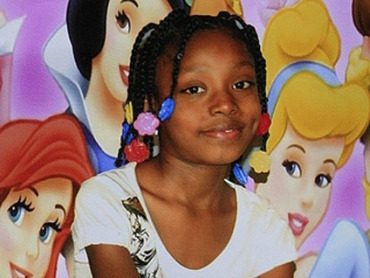 I'm taking a moment from my usual sexing-it-up posts because of the little girl pictured above.

For those who don't know, her name is Aiyana Stanley Jones. And she's dead. Her family just buried her this week.

She didn't die from leukemia or in a drunk-driving accident or at the hands of an abusive or negligent parent or guardian.

She died for the sake of entertainment.

For those who haven't heard the story: Detroit police raided her home on May 16 in what the department said their "executing a search warrant" of a murder suspect they eventually found in the home. According to the Detroit Free Press:

Police said that they threw an incendiary device known as a flash bang through a front window of the home to create a distraction.

After entering, a Detroit officer got into a tussle with Mertilla Jones, Aiyana's grandmother, who was in the front room.

The police gun went off. Aiyana was killed.

According to family members, Aiyana was sleeping on the couch, which sat near a window that faces the street. The explosive device the police threw in landed on that couch and burned her, said her father, Charles Jones. He and others say the girl was burning when she was shot.
…

Aiyana's dad, Charles Jones, said he rushed into the living room after hearing the explosive and gunshot. He says police made him lie face down on the ground, his face in shattered glass and the blood of his daughter.

The Detroit police department has offered an apology for Aiyana's death and says they are conducting an investigation.

Meanwhile, understandably righteous outrage, several countercharges, and downright ridiculousness came out as the Stanley-Jones family and circle of supporters prepared to bury Aiyana: people utilized social media to voice sadness and upset over this senseless death; the alleged suspect who touched off this tragedy is a 34-year-old man who is accused of shooting a 17-year-old youth because he didn't like the way the teenager "looked at him"; Aiyana' grandmother, Mertilla Jones, said the police lied about the gun firing because she was trying to wrestle it away from the officer (new video evidence allegedly suggests the fatal shot coming from outside the home); Jones contends she was inside during the raid and tried to protect her grandchild but was too late; politicians did their usual grandstanding; celebrities took the cops and the community to task for Aiyana's death and to stop further senseless killings, especially of young black children.

But, as I said, I also blame Aiyana's death on the media complex: of the "if-it-bleeds-it-leads" infotainment ethos that seems to pass for news—especially local news—nowadays; the perpetuating of the meme that black people are always and inherently entertaining to watch, especially if there's an element of criminality and punishment to it and it's getting "handled"; of the physical erasure of women and girls as watchable; the deaths of women of color, cis and trans, as not worthy of discussion–let alone activism–outside of PoC communities.

Or, perhaps, it would be more correct to say that Aiyana's death is really our collective fault, if we continue to accept these conditions as part of our pop-culture consumption. If we do, we do not bury her with whatever deities she and her family believe in. We sacrifice her, again and again and again.

With that said, what I want to do is simply cry for her...

Seriously, I feel like crying. What a cutie. This is horrible & senseless & even though she is gone & nothing can bring her back. Those cops need to be put on trial & procedures need to change. This is an outrage & I want to hear more about this on the news then about who won American Idol or who cheated on who!

The cops were also being filmed for a reality television show during this whole thing, too.

My heart goes out to the family and the neighborhood.