Onscreen, young women of color with immigrant parents are often far from traditional. They  struggle with the heightened expectations of their parents: New Girl’s Cece should marry an Indian man, All-American Girl’s Margaret should work for the family business and live at home, Grey’s Anatomy’s Callie should be religious and heterosexual, Elementary’s Watson should work as a surgeon rather than Sherlock’s sober companion. Though these characters’ parents are from various socioeconomic backgrounds and countries of origin, these young women all strive to fulfill what they want and what their parents want, against the backdrop of society’s often sexist and racist assumptions. And though these are some of my favorite characters on television, their experiences often veer from those of real-life second-generation immigrant women.

On the New Girl episode “Table 34,” Cece (Hannah Simone) attends an Indian marriage convention hoping to meet an Indian guy for a long-term relationship. She had been with lovable douchebag Schmidt (Max Greenfield) but wants to date someone whom her Indian-born parents will approve of. When her friends hear about the convention, they decide that they want to check it out, too—though only Schmidt dresses like, in Winston’s words, “the fortune teller in Big.” At the convention, she has to fill out an application including her resume. The event hostess seats her at Table 34, the losers’ table. (Cue Nick waving at Cece.) Has there been some mistake? The event organizer says, “Over 30 [years old], no advanced degrees, part-time employment. Table 34.” Cece says that she’s a professional model: “I was in Lil Wayne’s last video. I was the girl he was throwing strawberries at in slow motion?” The woman says, “Definitely Table 34.” Fashion model Cece is downwardly mobile compared to her parents, but she hopes that landing an Indian man will help her gain their approval.

In real life, these young women of color tend to be upwardly mobile compared to their parents. A recent report from the Pew Research Center explains:

Second-generation Hispanics and Asian Americans place more importance than does the general public on hard work and career success….Adults in the second generation are doing better than those in the first generation in median household income ($58,000 versus $46,000); college degrees (36% versus 29%); and homeownership (64% versus 51%). They are less likely to be in poverty (11% versus 18%) and less likely to have not finished high school (10% versus 28%).

This means that, though I love characters like Cece and Watson, I think that their unconventional journeys have more to do with crafting a traditional Hollywood story—an exploration of generation gaps—than a realistic second-generation American one. To be sure, not all young, second-generation American women have thrived in this post-recession economy. And moreover, there are TV characters whose stories are in line with the data above: Scrubs’s Dominican-American nurse Carla (Judy Reyes) leads a satisfying career, The Mindy Project’s Indian-American OB/GYN Mindy (Mindy Kaling) co-owns her medical practice, and The Carrie Diaries’s studious Asian-American high schooler Mouse (Ellen Wong) seems destined for the Ivy League.

I don’t need my TV to be in lockstep with statistics. What I’m more interested in is going one step further and exploring what these cultural expectations and upward mobility mean for American-born children of immigrants. When immigration, race, class, gender roles, and generation gaps intersect, how can young women of color triumph on their own terms?

For instance, Ugly Betty paints a complex portrait of what happens when a second-generation American woman ascends from the working class to the middle class. Though she lives at home and is emotionally close with her Mexican-born undocumented immigrant father, we see the separation between the two as she tries to explain a conflict at work. She tells him how she feels unattractive compared with the so-called “Glamazon” women at her workplace Mode. “Glamazon?” her father asks, confused. What’s fascinating here is the contrast between her and her father, encapsulated in her coded language. Their immediate concerns are so divergent; he’s a working class immigrant whose conflict lies in his health problems and legal status. She is an upwardly mobile American citizen whose ambitions are hampered by gender roles and a lack of class privilege. This particular narrative is a complex intersection of class, race, and gender roles, and a generation gap, a multifaceted exploration of identity that I wish were portrayed more often in mainstream TV.

These are complicated issues for primetime TV, ones that touch on various forms of marginalization. But we’re living in a golden age of television that has welcomed an influx of woman-centric narratives, complex heroines, and LGBT storylines. What remains truly risqué on the small screen are more frank dialogues about immigration, race, and class. And because, according to the Pew Research Center, “virtually all (93%) of the growth of the nation’s working-age population between now and 2050 will be accounted for by immigrants and their U.S.-born children,” it’s crucial that fiction go beyond the same old storylines. Not just because it makes for high stakes narratives and compelling characters but also because second-generation Americans are a growing audience. And, trust us, we’ll be watching.

I have just one issue with this comment, CeCe is successful! she has managed to build a career for herself, that no does not include an advanced degree, but she is certainly not downwardly mobile. I felt that the comments made by the event organizer were poking fun at the expectations of success for an immigrant family, compared to the US idea that a self-made modeling career is an example of success. 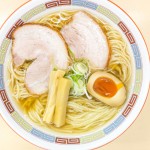 by Sarah Mirk
Food is a deep reflection of our identity.