I'm the type of person who likes to think of themselves as flying under the radar. So you can imagine my surprise when I woke up yesterday to find an email from American Apparel in reference to my blog post from Wednesday.

I'll include the email and my thoughts, after the jump.

Annalee,
I thought I would email you this morning after seeing your post. First, it
might be weird but thank you for correcting that the ad isn't real. Some
writers know that but are saying otherwise. American Apparel would never,
ever run an ad like that.
As for the quote, it's not exactly genuine either. It's sourced to an
interview that was done by the McGill Daily, a student newspaper in Canada.
Dov and the interviewer were discussing the book, Not Guilty: The Case in
Defense of Men. Not even the merits of the book...because there probably
aren't any...but what the book said. The kid attributed that to Dov,
wrongly. The reason it wasn't corrected is because it all happened 5 years
ago in another country.
I totally get that Dov Charney and American Apparel have a controversial
reputation. I also get that it's your job to hold people responsible for
sexism and stupid quotes like the one above. But nobody at American Apparel
agrees with what that says. It's just wrong. The assumption there is that a
ceo of a company that employes thousands of women went on record, on
purpose, to accuse them of causing the majority of domestic violence.
Jumping to conclusions is one thing, but this happens to be completely
untrue.
Again, that's where this all comes from and we wanted to explain. You
don't have to print our side of the story but I thought you should know it.
Ryan Holiday
American Apparel

I certainly appreciate the tone of Ryan Holiday's response and the fact that he agrees that the quote printed on the mock-vertisement is offensive. But I'm not entirely convinced of Dov Charney's innocence. Ryan claims that Charney was misquoted and that "nobody" at American Apparel agrees with what the quote says, but doesn't exactly speak to how Dov feels about being wrongly attributed to such a stance. He claims that Dov Charney hasn't bothered clearing up his rep because the interview (from which the quote originated) was conducted over 5 years ago and in Canada (and, as we all know, what happens in Canada stays in Canada).

At the end of the day, I'm not sure how to feel about Ryan's argument. He mentions offhandedly that he "gets" that Dov and AA have a controversial reputation. I don't think I would use the word "controversial" for a company whose CEO has been subjected to five sexual harassment lawsuits and whose advertisements range from a little skanky to downright amateur porn-ish. Maybe I would say something a little more inappropriate. Like, shiny blue latex leotard inappropriate. In the end, I think it is pretty obvious that their "controversial" rep is self-cultivated. And Ryan didn't address my argument that the mock-vertisement points a finger to my very real issues with AA.

What are your thoughts on this? Did any other bloggers get a similar email?

I also did a write up on the mock-vertisement and have not received a letter from Ryan. His tone in that letter seems to be more of a "trying to save his own ass" as opposed to being really offended and upset that such a thing were circulating.

If it was my company or a company I worked for, that was striving to be a little more reputable, I would be completely irate that such a thing were circulating. He did not mention Dov's position, only to make a he said/she said statement about it being taken out of context, and he only took that stance that he and others at AA were mildly perturbed. It just seem too matter of fact for me.

If Charney did not say that and found it even SLIGHTLY offensive, I'm sure he would have asked for a correction of some kind. I would think that he would at least think of his company's future reputation, if not his own reputation.

The tone of the email is nice enough. Still sounds like a load of crap though.

I apologize. I didn't mean to offhandedly reference the company's reputation. But there's not an amount of money in the world that would get me up in the morning sending emails like the one I did to you if that kind of sexual harassment actually went on. Even in a recession, there would hundreds of better places to work. We all know that if someone had done those things just once, they'd be the kind of person who did it all the time. That's not how it is at American Apparel.

If you guys get a chance, you might want to look at this article about the sexual harassment lawsuits. I realize that after everything every one has "heard" it's difficult to swallow but as you can see with stuff like this, controversy tends to spread much faster than the real story.

"whose advertisements range from a little skanky to downright amateur porn-ish." 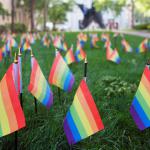 by rhienna renée guedry
The Pulse shooting was everything I feared when I worked in a Florida gay bar. But we won’t cave to violence.