"Amira & Sam" is a Rom-Com That Deals With Immigration, Identity, and Love | Bitch Media

“Amira & Sam” is a Rom-Com That Deals With Immigration, Identity, and Love 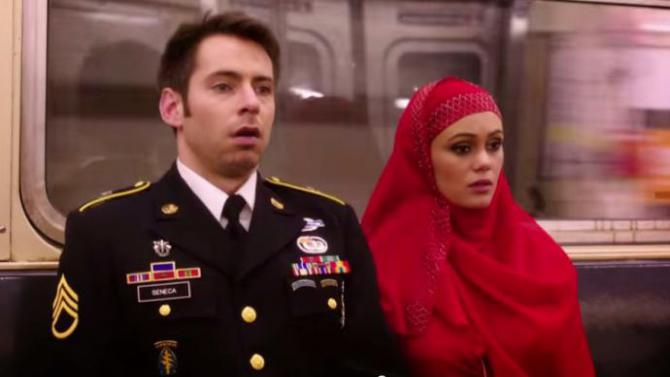 Early in the new romantic comedy Amira & Sam, we are introduced to Amira, a Muslim Iraqi immigrant, as she tries to sell pirated DVDs on a corner in New York City. In the midst of the bustle of the city sidewalk, a woman wearing a hijab similar to Amira’s stops to stare. Amira immediately says, “What are you looking at?” The woman, dressed more conservatively than Amira, responds in Arabic, saying to her, “Aren’t you ashamed? You wear a hijab with your skin showing?” Amira, angry and defensive, yells back at her in Arabic, “Mind your own business!” The woman offers one more insult before walking away. Amira looks off, her expression sad, but after a few seconds she goes back to hustling DVDs.

The scene is jarring, especially as the introduction to the female protagonist in a romantic comedy. But it was an important one for both the actress who portrayed Amira, Dina Shihabi, a newcomer in a star-making role, and writer/director Sean Mullin. When I talked with her recently, Shihabi described her character as someone caught between two cultures—her home country of Iraq and her adopted home of NYC. Shihabi knows something of this herself: she was born in Riyadh, grew up in Dubai, and moved to NYC in 2007 to pursue acting. In this confrontational scene, Shihabi and Mullin wanted to show that Amira was making her choices deliberately. Shihabi says, “She was someone who wanted to be rebellious and [her clothing choices were] her way of doing it. It’s a moment for Amira to be like, ‘No. Fuck you. I’m going to be who I am without apology and this is my choice.’”

The unfair burden of a character rarely seen on screen is that they are often forced to represent so much more than themselves. Writer and director Mullin notes that Amira is not supposed to stand in for a religion—she’s not representing Islam at large. The scene with the confrontation over her hijab serves, Mullin says, to both give us clues about Amira and to quickly signal that Amira feels trapped between different cultures. Most importantly, it begins the film’s narrative arc of Amira, who’s unapologetic and strong lead. “That’s a way to judge a good romantic comedy, if the male and female leads go toe to toe,” says Mullin. Sam’s character, meanwhile, is informed by Mullin’s own background. A graduate of West Point, Mullin served in Germany and then was transferred to active duty in the National Guard in 1999. He joined the Upright Citizens Brigade and started doing stand up comedy. Then 9/11 happened. Mullin was made a captain at Ground Zero, where he would spend twelve hours a day before heading to do comedy at night. Sam is not Mullin, that is clear enough, but certainly the writer’s life helped shape the character. 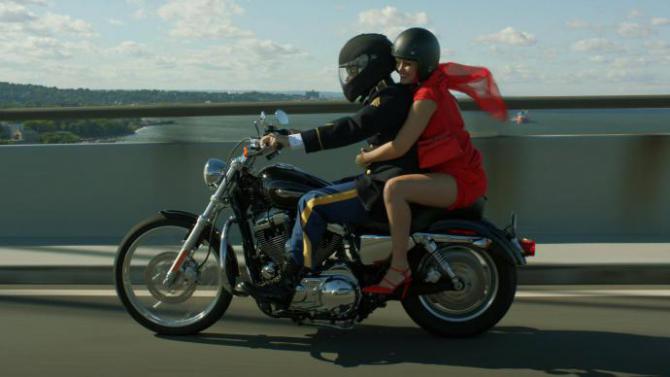 Amira & Sam, which is currently screening in independent theaters nationwide and available online, takes place over a few weeks in July 2008.  Sam, played by Silicon Valley and Freaks and Geeks actor Martin Starr, is a War on Terror veteran who has just come home. He works security at a Manhattan apartment complex full of young asshole socialites—a job he loses during an opening scene where he traps some of those assholes in an elevator after one pisses on entrance to the building. Sam’s a bad stand-up comic and, unemployed, he ends up helping his hedge-fund-managing cousin (played by Vampire Diaries’ Paul Wesley) try to land a client who is also a veteran. This Wall-Street-before-the-bubble-exploded side story is a strange outlier in the movie, though it serves to establish that Sam, like Amira, doesn’t really fit into the culture around him in Manhattan. When Amira and Sam first meet, she’s constantly on guard, having just run from the police after nearing getting cuffed for trying to illegally sell DVDs. She dismisses Sam immediately and says he smells like a cop. Eventually, Sam and Amira get friendly and we get a bunch of those quintessential, lovely romantic comedy scenes.

All romantic comedies need some sort of high-stakes drama that threatens to derail burgeoning love. This film’s conflict hits harder than most film’s quirky misunderstandings, though: the crisis of the film is that Amira faces imminent deportation. When they first meet, Amira is already skating on thin ice with immigration. When people at a Wall Street party make Islamaphobic and sexist comments, Sam jumps in to defend her and a scuffle ensues where Amira accidentally hits a woman. The injured woman presses charges against Amira and then the bureaucratic wheels start turning. There is nothing that can be done to stop Amira’s deportation, Sam is told repeatedly. 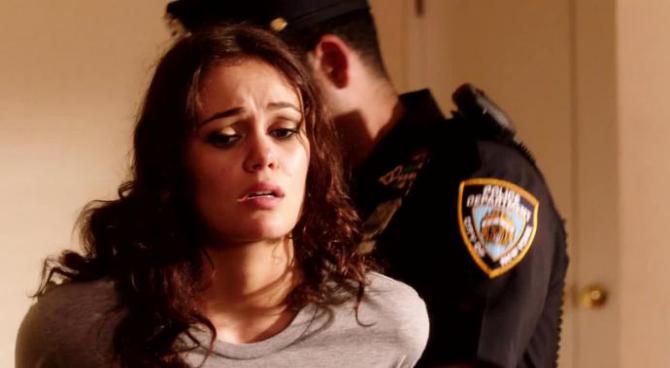 Since the movie is built around the conflict of Amira’s deportation at the hands of the United States government, the inevitable conclusion (this is a rom-com, after all) is that Sam will have to save her. Amira is up against quite a powerful villain. People will certainly read the end of the movie as Sam swooping in as a white knight. But that’s too simplistic, in the end. In truth, Sam needs saving, too. For Mullin, the best romantic comedies are when “nobody in the film understands either one of [the protagonists], except they understand one another.” This is true of Amira and Sam. They are both part of two groups in this country that are marginalized by our society. In this movie, that marginalization brings them together.

As actors, Martin Starr and Dina Shihabi are wonderful together. Their initial awkwardness and the eventual melting of the ice between them is the most genuine part of the film. Shihabi says the pair spent a lot of time together off set, spending time working on their lines and their interactions. And then on set, she says, Mullin told them, “Now you can just play.” All-in-all, it sounds like Mullin was very open to allowing the actors to develop and define their characters, both as individuals and in relationship to one another. This pays off on screen. They are funny together, both of them with their own kind of dry humor. The real world, though, is never far away for Amira and Sam.

Amira and Sam takes on big issues—veterans during a never-ending war, immigration, and Wall Street corruption—and sometimes the film can feel unwieldy because of it. This rom-com is, at points, too big for its britches. But Shihabi and Starr ground the characters, they make them believable, and they make you fall in love with them. They may be two characters straddling worlds, never quite fitting in anywhere, but they fit so well together.

Oh wait just what we needed: another whitey representing a Muslim Immigrant Woman - because yeah he's the expert, and us Muslim women have soooo much agency to tell our own stories as it is. Right?

Sam could have easily solved the problem by marrying Amira and then having his cousin and his $25 million dollar investment buddy , both of whom are part of the 1% that run this corrupt nation call in a few political favors i.e. grease John Beiner's palm, hire an immigration attorney and poof , welcome to U.S. citizenship, Amira . A word of caution Amira. Be careful what you wish for ! Sorry , I didn't want to dangle my particable,especially on this website !