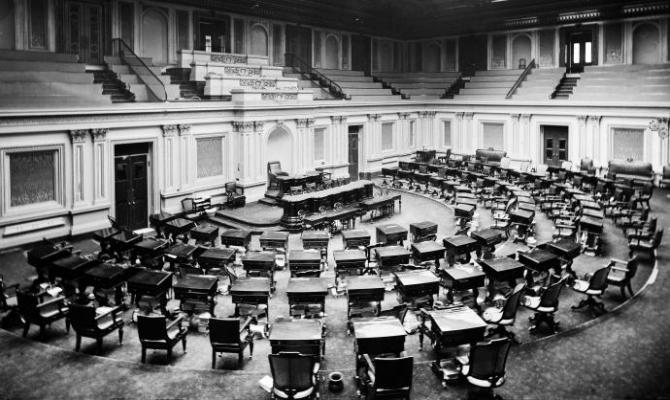 My heart feels as empty as this Senate chamber. (photo from the Library of Congress)

I was up late last night. Like, so late that some people were waking up by the time I went to sleep. My otherwise comfortable bed offered no solace as I tossed and turned thinking about midterm election results. Republicans with full control of the congress after winning majorities in both the Senate and the House. Wisconsin’s incumbent governor, Scott Walker, best known for stripping collective bargaining for the state’s public employees, was re-elected. Ted Cruz continues to be hell-bent on repealing Obamacare (even though the new Senate Majority Leader Mitch McConnell has said that it is near impossible to dismantle the Affordable Care Act). When it rains, it pours, huh?

On Election Day, we published this list of important votes to track, let’s try to focus on some of the positive outcomes as we take a look at the results.

Many of the important races yielded sad news: Democratic assemblywoman Lucy Flores lost her bid for the role of Nevada’s lieutenant governor and, in a frustrating turn of the misogynistic time machine, Tennessee passed an amendment that gives their legislature power to limit access to abortions. Wendy Davis lost her bid for Texas Governor. Ugh.

But here are some uplifting victories: Alaska, Arkansas, Nebraska, and South Dakota all voted to increase statewide minimum wage laws. Arkansas’ current minimum wage is the lowest in the country at $6.25 an hour and all of these states’ pay increases will eventually best the federal minimum of $7.75, ranging from $8.50 to $9.75. Oakland and San Francisco also voted to increase minimum wage, recognizing the high cost of living, to something closer to a living wage of $12.25 and $15 an hour, respectively.

Massachusetts, and the cities of Oakland, Trenton and Montclair, New Jersey have passed laws requiring paid sick days for employees in work places with more than 10 employees. They join three states and more than a dozen other cities in enacting legislations that protect workers.

North Dakota and Colorado struck down “personhood” laws that could have led to criminalizing abortions. Hallelujah!

Also a pro-tip: don’t read the disparaging comments on stories about legislation that you cared about and ultimately failed at the polls. It’s insult to injury and will just sour your day even more. Instead, I offer some words from Andrea Miller, the executive director of Causa Oregon, an immigrants rights organization, who spoke about the failed measure to issue drivers licenses to undocumented immigrants in Oregon, “So while we are disappointed tonight, we are far from discouraged. The need for action is real, and the need continues.”

Related Reading: How Do I Win an Argument About the Wage Gap?

I live with my partner in a trailer just outside of city limits; it was the most affordable place we could find to live, that was not practically falling apart. I work at Walmart a full forty hours a week, and am just above the poverty line before student loans take out their share biweekly. For almost a full year now I have had to manage our rent and electric bills alone, along with the majority of our other living expenses. My partner does work very hard, but despite her multiple degrees, she has barely made enough for the costs on our shared vehicle and her own student loans. Despite the amount of work the Affordable Care Act needs to be fully functioning, without it I would likely go uninsured. The insurance Walmart offers would leave me with less than $250 for all expenses after rent each month (this includes electricity, water, phone, groceries, dog food, laundry, and any clothing needs), without giving me near as much coverage.
My fear as of the 2014 elections yesterday, is that my ability to receive health care will be taken away before I am able to afford any other kind. The chances of the minimum wage being raised at the Federal Level/Kentucky State level now look even bleaker than before. While I do not agree with all that the Democratic Party has in their agenda, now that the United States Senate and House are majority Republican, I will not be surprised when I see even more families left to beg on the streets, even in this small city of 60,600 people.