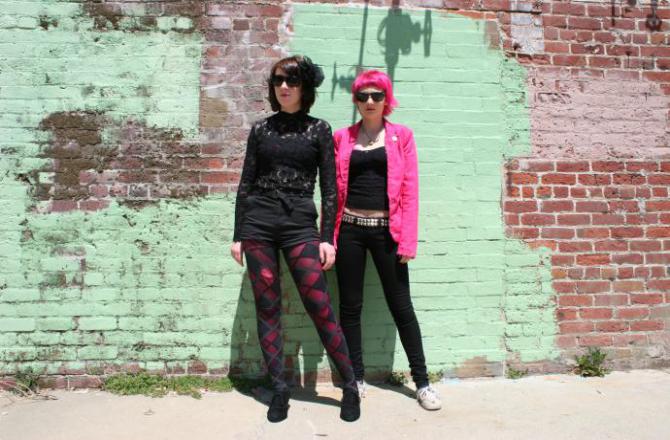 Getting the courage to form a band and play gigs is a nerve-wracking feat. But when you’re seven years old and playing with your sister on a bargain drum kit snagged from a yard sale, fear of performance is maybe not really something that crosses your mind right away. At least that was the case for Lucy and Gwendolyn Giles, the teenage sisters hailing from Sacramento who are currently touring the country as a band called Dog Party.

Together, the two have juggled school and music lessions with recording three Dog Party albums, including most recent release Lost Control. When not playing with one another as Dog Party, sixteen-year-old Lucy plays drums for Pets and eighteen-year-old Gwen plays keys and synth for electronic trio Ugly Bunny. Both also play with Kepi Ghoulie and are joining him for the fourth summer in a row.

With such a busy summer ahead for the Giles sisters, I was grateful to steal a moment with them over Skype to talk record deals, gender-and- age bias in music, and future plans. A few days prior to our interview, Gwen had donned a cap and gown for her high school graduation. Just a few days later, Lucy celebrated her sweet sixteen on the first day of a nationwide tour with Kepi and Pets.

EMILLY PRADO: Thanks for taking the time to talk with me!  Where are you both now?

LUCY GILES: We’re in Sacramento but we’re touring out to Indiana for a festival called Plan-it-X Fest. Then we’re touring back and during that time we’re flying to Salt Lake City where we’ll be in SLC 2: Punk’s Dead so we’ll be in the concert footage for that movie.  We’re really excited. After that we’re going to Europe for a month then when we fly back two days later we’ll start our two-week tour around Southern California, Arizona, and New Mexico.

Wow. You started Dog Party way back in 2007.  How did that come about?

GWENDOLYN GILES: I picked up playing guitar in fourth grade and played for a few years. Then we found a really cheap drum set at a garage sale, so Lucy had drums.

LUCY: And we just basically listened to really cool music when we were younger. My father listened to The White Stripes and similar bands, and I was really inspired by Meg [White] who plays the drums and decided I wanted to play the drums too.

And how did you two decide on the name Dog Party?

LUCY: Well I really loved dogs when I was younger and knew like every breed so I told my sister that it had to have “Dog” in it. Then she was just throwing out some names and all of a sudden Gwen said “Dog Party” and I was like “yeah!”

Does the name fit what you’re doing musically now?

LUCY: We didn’t have [long-term] plans for the band, really, since we were just mere children when we started, but it works out now.  It’s a fun name: DOG… PARTY! [Lucy breaks into a little dance and we all laugh]

Do you guys come from a very “musical” background?  Do your parents play music too?

What’s the process like between writing songs between you two?  And since you’re both in projects outside of Dog Party, how does it differ making music with your sibling?

LUCY: Well, when we’re writing songs, sometimes I’ll have an idea or have some lyrics and I’ll go to Gwenie and ask her to check it out.  And then we like to write songs together a lot on Lost Control. When we were younger, we used to write a lot of songs together but as we’ve aged, we haven’t as much.  Whenever I have an idea I’ll always show her and she’ll give me input or change things, you know. So in a way you could classify us as always writing songs together.

GWEN: Sometimes it’s like, “I wrote this whole song except for one line.”

LUCY: A lot of the times she’ll write the guitar part and like all the chords and stuff, and I’ll write the drums.  I play guitar a little bit and I’m not very good but I can play some chords, so sometimes I’ll figure out stuff and show her.

Did you go to a lot of shows growing up in Sacramento?

LUCY: Once we started playing we started going to all sorts of different shows.  We were too young to go before we started Dog Party.

Tell me more about the Sacramento music scene.

GWEN: It’s interesting and there’s a lot of talent.

LUCY: There are a lot of great people in it and I think it’s a great place to be.

GWEN: Unfortunately it seems like there are even less and less all-ages venues.

LUCY: Yeah, at the moment we’re in a downfall for all-ages venues but I’m sure that it will revive itself and come back.

Has it been hard for you to book shows then since you’re underage?

LUCY: It is difficult in Sacramento—

GWEN: —because there are a handful of really great venues where we can’t even play at all or we have the play at “Sunday matinees” which we don’t really like.

What’s the process been like for you guys touring?  Gwen do you drive?

GWEN: I got my license just last July, so with my permit I wasn’t allowed to drive Lucy and I around. Technically it would be legal in some states but they didn’t want me to risk it.

LUCY: Kepi, as you may know, was in the Groovie Ghoulies and that was for a long time so he’s got to drive all around the country.  We have to drive really long distances sometimes and he’s really good at that.

How do you balance being in school with touring and practicing and other regular obligations of being a teen. It seems like a lot to handle!

LUCY: We only tour over the summer time and not during the school year.

GWEN: Every now and then we’ll try and get to LA.

LUCY: Yeah, and we try to play only on weekends.  Sometime’s we’ll try and get our homework done fast and play on a weeknight and sometimes we’ll miss just a few days of school for quick weekend tours but usually it’s on weekends.

GWEN: And since we’re in the same house practicing is easy.

That’s super convenient.  Congrats on graduating by the way, Gwen.  Do you have plans for school and, if so, how do you think that’ll affect Dog Party?

GWEN: I’m gonna go to Cal Poly San Luis Obispo so hopefully I’ll either have open Fridays or Mondays so the weekends are longer and I can take the train down for shows.  They also have practice rooms available there.

[Many dogs come into frame causing a real-life dog party and laughter ensues! I also say hello to a little brother sitting in the corner.]

Okay! You just had an album released under Asian Man Records late last summer.  How has the process changed for releasing albums from when you started until now?

LUCY: This one had a lot of media attention and we had a publisher dude.

GWEN: For the previous albums we’ve had to call up all the local newspapers and organize it all on our own, so it’s kind of nice to just sit back and have someone do that for us.

LUCY: And Asian Man [Records] is really cool and they have a lot of hype.  They have a lot of long-term fans that will just buy everything.  It’s cool that we’re apart of it now.  We just joined a huge, awesome family.

What sorts of challenges do you think you’ve faced in general or in regards to your age or gender?

LUCY: Well, for us, when we look at music and everything, we don’t like to call ourselves a girl band.  Or, “hey, I’m a kid band.” We’re a band.  We don’t want to label ourselves and don’t look at that as a “thing” but a lot people do.  And I just think it’s whatever.  I’ll still play music—what does it matter if I’m fifteen and you’re 20-blah, you know?  I see that we’re on the same level and even though some people may not believe that we are, I do.  A lot of times people will try to book us on all-girl band shows or all kid-band shows and it’s cool to play with other people to similar to ourselves but we just don’t really enjoy being labeled like that.  I never ever seen any shows that are labeled “all dude bands.” I never see that.  I’ve never seen that, ever in my life. I just think that everyone’s equal.

GWEN: I think the only label music should have is genre because it describes the sound. There’s no difference between the sound of a girl strumming a 1-4-5 riff on the guitar and the sound of a guy doing the same. No other titles necessary.

Yeah, totally.  Can you talk more about being put on gender- or age-specific bills?

GWEN: We don’t reach out specifically to get on shows that are ‘all girls’ or ‘kid bands’. We try to get on shows with bands that we like, some of which happen to be all girl or teens. As far as [being a part of] supportive communities, I’ve found people to be very supportive regardless of the lineup.

Do you have any advice for other teen girls trying to start bands or what they should be prepared to deal with?

LUCY: Go and do it because you can dream about it all you want but if you don’t do it then you’re just not gonna do it.  You’ll actually accomplish something if you just try!

GWEN: Yeah, and just like getting out there and playing more and more shows because as we’ve played more shows we’ve gotten smarter about how it all works.

Sweet. I can’t wait! Any final thoughts for Bitch readers?

GWEN: We’d rather just be called “good” than “good for our age” or “good for being girls.”

You can catch Dog Party all around the U.S. and Europe this summer—check out their tour dates here.

Emilly Prado is a former Bitch editorial and new media intern and graduate of Portland State University. When not writing for various publications, she snaps street fashion pics for Willamette Week, partakes in a day job, and uses the internet far too much. Find her on Twitter at @_ahoramismo.

They're not just "good", they're awesome! Thanks for the recommendation and interview. :)

Looks like it's cheaper to buy the album direct from the label than thru retailers, so I'll have to get on that.