An Ode to Lady, My Favorite Brazenly Sexual Rapper

In her 2011 music video for “Yankin,” the rapper Lady does whatever she pleases.

On September 29, the U.S. metal band Mastodon unleashed their video for “The Motherload,” a gratuitously twerk-tastic romp featuring women of color dancing against a Nine Inch Nails-esque backdrop. The backlash followed soon after, and when reached for comment, drummer Brann Dailor said he did not see the sexism of the video, saying that the band sought only to make something “fun” and “bizarre.”

With every butt-oriented music video released unto the public consciousness, the great debate arises anew: is a woman shaking her ass on screen an appreciation of her own body and skill or is it jiggling objectification focused on pleasing male viewers?

Nicki Minaj’s “Anaconda” and the Jennifer Lopez/Iggy Azalea collaboration “Booty” were released within weeks of each other to a similarly polarizing internet response. Bitch Associate Editor Amy Lam defended Minaj’s unapologetic sexuality while others found it frustrating. Likewise, favorable reviews of “Booty” praise the “elegant and seductive” look of the video whereas critics like The Distillers’ Brody Dalle have called it “horrendous.”

There is no easy way to talk about female sexuality. Women exist within a narrow spectrum of what is “acceptable” sexuality—pushing that line often results in outrage among critics and fans. People criticize Nicki Minaj’s for her hyperfeminine, sexy clothes, for example, but if she were to go in the opposite direction—like not shaving or not wearing makeup in the name of sexual expression—people would certainly heap flack on her for that, too.

As someone whose self-esteem is perpetually challenged, I find myself empowered by Nicki Minaj’s display of body confidence in her video for “Anaconda.” And all this discussion over Nicki Minaj and Iggy Azalea’s brazenly sexual new songs reminds me of an artist whose own ode to lewdness and sexual power struck home for me a few years ago: Lady. Her work hasn’t gotten as much attention recently as Minaj or Azalea’s, but her song “Yankin’’ hit many of the same notes when it came out in 2011.

Lady is the stage name for 25-year-old Shameka Brown, a black female rapper from Talbotton, Georgia. When she was 13, Lady formed a rap group with two friends and was the “main attraction” of her school’s lunch room concerts. In 2010, she signed with music label Big Gates Records, and since then her music has appeared on TV shows like HBO’s Girls, Showtime’s Ray Donovan, and the BBC show Skins. It is on her 2010 album Bitch From Around The Way 2 where you can find one of the most frank songs about a woman’s sex game you’ll ever hear: “Yankin.” (If you’re unfamiliar with the word, you might want to read the Urbandictionary definition of yankin). The song goes:

I can’t even lie, I fuck better when I’m drinkin’

Pussy feels so good, feels like the rubber off, ain’t it?

You ain’t gotta tell me, I know this pussy be yankin

The most telling lyric and what makes it a stand-out in the “sexually liberated woman” song catalog is that final line of the chorus: “You ain’t gotta tell me, I know this pussy be yankin.” Although Lady is proud of the “hypnotic” powers her pussy possesses, she doesn’t need anyone reminding her. In an age where Cosmopolitan-style magazines continue to prey on women’s insecurities and ply them with sex advice centered on pleasing men, it’s refreshing to see a woman safe in the knowledge that she is good at having the kind of sex she enjoys.

Not only does Lady not need the validation of her male partner, she also advocates safe sex without pandering to the listener. In “Yankin” Lady makes the claim that her pussy “feels like the rubber off, ain’t it?” and commends her partner for using a Magnum condom (“the perfect size”). For Lady to normalize the use of protection during a sexual encounter and assure the wearer that they will still have a good time together is a pretty huge deal. 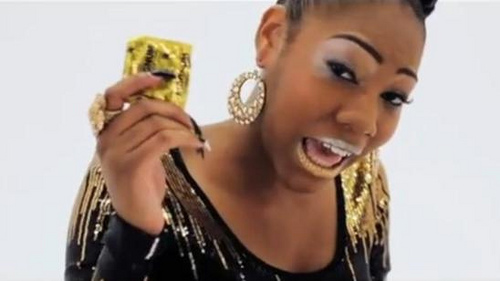 Lady flashing a Magnum-size condom, which goes very well with her outfit.

However, as many positive things as I have to say for “Yankin,” the video requires some careful discussion. In it, four women in lingerie sit on footrests or around a dining room table while men stroll about in Jockeys, serve them food and massage their feet. If the men get too close, the women brush them off. In one memorable scene, Lady has two men on all fours, collared and leashed.  Dissecting the way Lady flips the script here is a challenge. Lady has been telling us she is in charge, and in the video she shows us that by placing women in a position of power over men. While this is a common sexual fantasy, ideally the solution to the the women-as-props trope in music videos would not just be making men into props. Still, women in any kind of dominant role tend to attract a far greater number of negative comments about their sexuality, so Lady’s fearless display of body confidence flies in the face of the Youtube comments on her video that paint her as someone who has “undone what MLK did” and has “absolutely no respect for herself.” That fearlessness is why, despite being a queer woman who only occasionally fancies men, I feel a personal connection to the song. While the video has its problems, in its way, it’s empowering. It’s important.

Nowadays Lady is working on her upcoming album Lip Service, which still awaits a release date. If this recent tweet is any indication, we will be hearing more from Lady sooner rather than later. Whenever her new album comes out, I’m sure it will be the subject of fierce debate.  I bet she’d say, “Bring it on.”

Ariana Vives is the new media intern at Bitch, a graduate student at Portland State University, a lover of all things Lady, and a pro wrestling fan who hopes that Rockstar Spud will realize his worth and ditch Ethan Carter III.

I looked at the urban definition and it didn't seem to fit what the drift of the article is. I am wondering if it has been google bombed or something like that. You might want to check that link.

Thanks for the note! This song refers to the second definition currently listed on Urban Dictionary, not the first.

did you scroll to the second definition?

I think it should be pointed out that KHIA got here first. She released "Thug Misses" in 2002, when she was also 25 (twelve years ago), and the hit single "My Neck, My Back"...well, it was....quite liberated.

I like this article. Thank you for not shunning the untamed female sexuality. I feel that we need to own that!!!

Thank you for writing about Lady! I LOVE LOVE LOVE her music. Her song "Pussy" is one of my favorite songs ever. 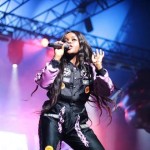 by Katie Presley
Australian rapper Tkay Maidza's music hearkens to MIA and Icona Pop, has features from Killer Mike, and claims Nicki Minaj and Santigold as influences. The result is a high-energy hodgepodge, and it's pop hip-hop gold.