An Ode to My Four Favorite Women on Mad Men 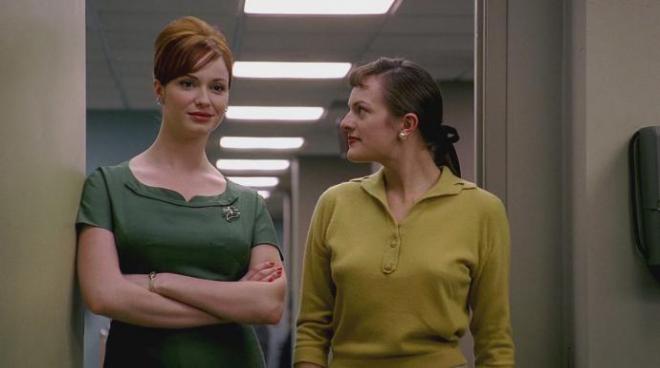 When you repeatedly watch the same show over the span of multiple seasons, the reality that it can come to an end and be finished forever is really, really strange.  When you watch shows like Twin Peaks or The X-Files or Freaks and Geeks in the year 2014, you’re well aware of exactly how many hours you’ll be blessed to spend lying in bed with Netflix propped up, streaming right onto your lap.  To watch a great show from start to finish is rare and will inevitably leave you with a feeling of emptiness and questions you’ll never be able to fully shake once it’s over.

Before we jump into the seventh season premiere of Mad Men this evening, I want to give some love to my favorite female characters who I’ll miss when the show is over. Spoilers through season six ahead! 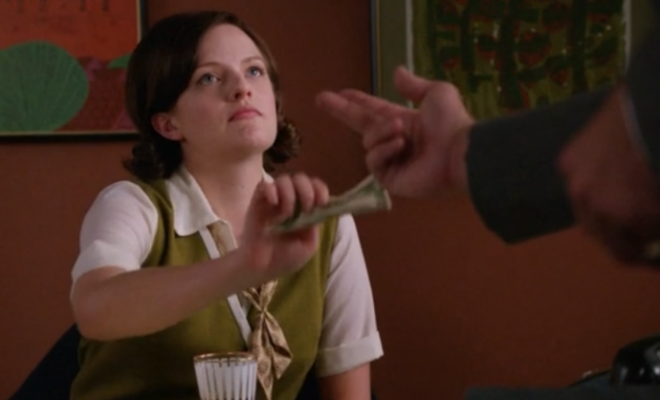 Peggy Olson in one of her finer moments: taking cash money from Roger Sterling.

When we first met Peggy Olson (Elisabeth Moss) in 2007 (er, 1960), she was a secretary combating the sass of Joan Holloway and the sexual harassment of her male counterparts.  Peggy starts as an overly apologetic, mousey type, and watching her work her way up in the male-dominated world of advertising and stepping out of her shell has been the absolute best story arc of the show. As the first Junior Copywriter since WWII, she wasted no time demanding raises, calling out Don on his sexist treatment of her, schooling Roger out of $400, and insisting on a fancier office when other employees didn’t have the courage to even ask. Fast forward six seasons later and she’s ordering around underlings in the style of Don Draper himself.  Through quitting her to snag a better-paying gig, accidentally stabbing her own boyfriend in the gut to get broken up with en route to the ER, and falling in love with countless unavailable douchebags, Peggy has proven exactly how resilient and hell-bent she is on doing what’s right for herself.  She is the epitome of a go-getter.  But unlike the always cold Don Draper, Peggy continues to show sides of humanness and care, even if they’ve been buried by her outward curtness.  Memories of her child still sting (thanks, Dorothy Campbell, for that unfortunate dementia-induced chat!) and she is willing to be supportive of her coworkers in all kinds of situations.  Bow down to Peggy Olson y’all cause there’s no doubt she’s Mad Men’s Queen P. 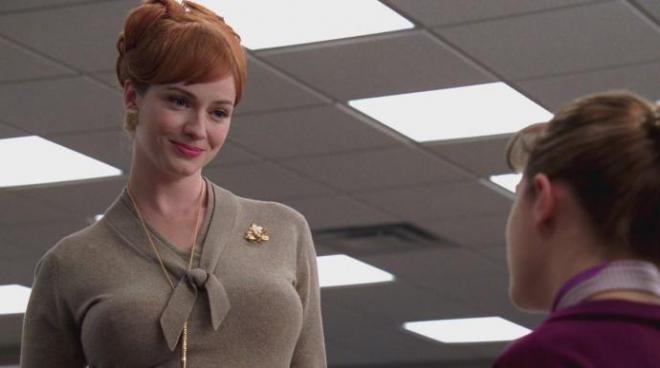 One person who Peggy unexpectedly helped out last season was the great Joan Harris (Christina Hendricks) herself who, as a newly minted partner at the firm, needed Peggy’s help to secure a contract with Avon. Were you also totally confused about the aftermath of all that sweet fake phone call finagling? I was too. In classic Mad Men fashion, Matthew Weiner assumed we would just know that Joan succeeded, so three cheers to that great news!  As the glue that’s kept Sterling Cooper from crumbling throughout the years, it’s unfortunate but unsurprising that Joanie has had to delve into tactics as seemingly shady as her colleagues to earn a taste of respect.  Like Peggy, she hasn’t let the loser dudes in her life tie her down. Although her sister Kate envies her success, Joan reminds her at one point that she’s been working at the ad firm for 15 years and her coworkers still treat her like a secretary. While Joan’s rise to firm partner has been a slower, rockier path, her unwavering confidence and level-headedness are essential to the survival of SC&P. Maybe the most priceless Joan moment in the show is when she kicks her husband out of the house and tells him, “I’m glad the Army makes you feel like a man, because I’m sick of trying to do it.” Boom. 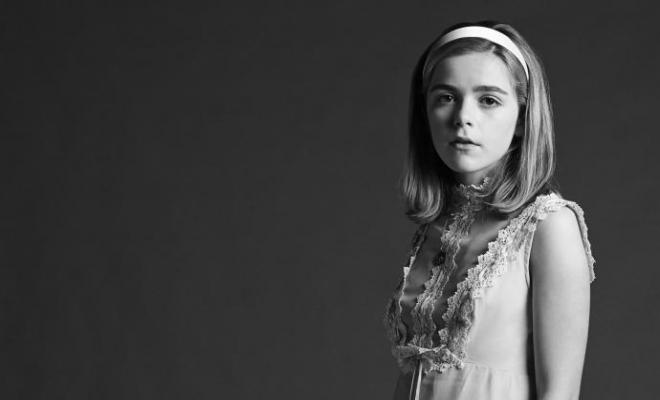 Who’s another confident gal to be reckoned with?  None other that Sally Draper (Kiernan Shipka).  Who hasn’t been rooting on Sally’s sass and inner rebel since season one?  Watching her grow up has felt personal and intimate.  She’s seen way too much for a kid of her age but has maintained an incredibly cool front beyond her years.  Catching Don with his pants down was inevitable and I’d lie if I didn’t admit to calling it right before it happened.  Perhaps Sally’s stonewalling and “broken home” tendencies, as Betty would say, are the harsh dose of reality her father needs to get his shit together.  It’s honestly doubtful, but the murmurs of hopefulness that were shed as Don showed his childhood home to the kids made me think change could be coming.  It’s hard to deduce how much of Sally’s bad girl behavior at boarding school was peer-influenced, but furthering herself away from her parents’ frantic attitudes is probably for the best. While I’ve totally dug all the lip she’s given her parents over the years, but her parents’ lack of child-rearing skils is getting hard to watch! 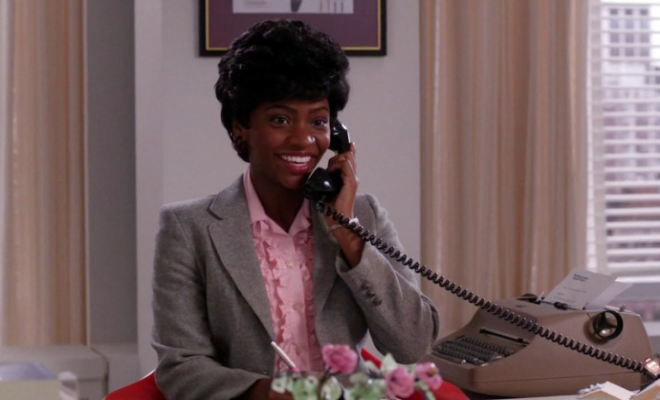 And finally this past season’s reoccurring-but-not-yet regular character, Dawn Chambers (Teyonah Parris), has had some solid lines but not nearly enough screen time. As Roots writer Michael Ross long ago pointed out, the lack of people of color in Mad Men is inaccurate and I’m always wanting to see more of Dawn’s story than we’ve gotten so far in the show. Her employment came about as a slight surprise but she held her own just fine throughout season five and six, pointing out the ridiculousness of the office to her trusted friend Nikki after work. The episode where we get to know Dawn most so far happens when Martin Luther King Jr. is killed.  Her insistence on staying at work in light of the death is reflective of her strains in balancing work life with her own.  It is in the aftermath of Dr. King’s death that a pivotal moment of alienation occurs. While trying to console Dawn, she is doused with a line from Joan: “I’m sorry for your loss,” when in reality it’s a loss for everyone, DUH.  In another episode, Dawn’s best-friend-to-be-wed, Nikki, complains of the neglectful job as maid of honor she’s giving to make way for her role at SC&P, to which Dawn shoots back that she must “keep her head down” to keep her job.  And when Nikki says she could never do the same, she lets her know that, “She doesn’t have to because she’s getting married.”  Dawn, much like Peggy straddles the thin line between work and personal responsibilities. And in all realness, while I understand that Mad Men is a show about white affluent dudes making it in Manhattan, can’t a girl dream and hope that the show could progress as the culture around it slowly was?

We all know that there are tons of other great female characters that deserve accolade, so here’s a quick list of standout quotes from season six:

So tonight we’ll embark into the final hours of Mad Men.  In the spirit of successful series like Breaking Bad, AMC and Matthew Weiner decided a drag out, two-season finale was in order. And although we’ll have to wait an entire year for the closest we’ll ever come to full closure, I bet it’ll be worth it.

Wait! You think Don was sexist in his treatment of Peggy? He wasn't sexist, he was demanding. He expected her best. The meek child that walked into his office and put her hand on his was dressed down, on the spot and demanding better from her always worked. She could never have done any of the things she accomplished if it wasn't for him. And more to the point, Don pushed everyone and demanded more, Peggy became who she is because of it not in spite of it. I can prove it, Joan had to screw her way up, despite of the fact that she didn't have to screw her way up the ladder. For all Joan skill she's meek as a baby when real work is expected of her from men. Sure she rides herd of the secretaries but when dealing with men, she's weak, especially when they don't want sex from her. Peggy's got none of that, and she learned that from Don.

Nothing on Betty? Come on!

I was SO excited this am to see that you are continuing to review, dissect, and reflect on Mad Men this season. I remember looking forward to this every Monday during season 6 and am so stoked it's continuing. Yay!

Trudy is such a badass. I also wish there was more screen time for Ken and Cynthia - as they seem to be the only balanced couple on the show.