Announcing a New Series About the Comics Industry: Don't Be a Dick | Bitch Media

Announcing a New Series About the Comics Industry: Don't Be a Dick

This year, comics fans have talked a lot about the persistent problems in the industry.  People who create and love comics have taken on sexual harassment at conventions, policing of who’s allowed to call themselves a geek, lack of queer characters in comics, publishers’ tendencies to publish few books by women creators, and badly drawn, sexy depictions of female characters, among many other issues.

The best way to talk about comics is through comics. That’s why we’re so excited to announce that we’re partnering with comics collective Ladydrawers to publish online a series of six comics about easy steps the comics industry could take to embrace a more diverse fan base.

The title of the series is simple: Don’t Be A Dick.

Starting in January, six different comics artists will each create a strip with writers Janelle Asselin and Anne Elizabeth Moore about an aspect of the comics industry. Bitch last collaborated with Ladydrawers for the winter 2010 Confidential issue, when they put together a six-page spread about gender politics among people working in the comics. Here’s one page: Anne Elizabeth Moore spells out what to look forward to in Don’t Be a Dick:

Our January strip will be an introduction to the wild world of comics terminology and all its various interpretations. Comic books vs. Graphic Novels, corporate vs. independent vs. creator-owned, direct market vs. bookstores—we discuss how all these terms apply to comics with our requisite amount of sass.  This first strip will be drawn by comics superstar Katie Cook, perhaps best known for her webcomic Gronk and her work on My Little Pony: Friendship is Magic.

In February we’ll tackle the entire history of comics! This will include creatorship, content, marketing, and demographic information from early comics until now, particularly as it applies to women and girls. It’s drawn by webcomics artist and co-writer of Image’s Alex + Ada, Sarah Vaughn who has an encyclopedic knowledge of romance comics in addition to mad art skillz!

March will bring everyone’s favorite discussion—content issues in comics! We’ll include looks at publishers both large and small, plus tips on what folks who aren’t men might want to read (hint: they like a lot of different kinds of things!). Genderqueer comics and fine artist Rachel N. Swanson will be adding their unique touch to this strip — more of their work can be found here and in other Ladydrawers projects including Hand Job and Unladylike.

April’s big at Ladydrawers HQ: Writer Janelle Asselin and Anne Elizabeth Moore celebrate birthdays, which means everyone must celebrate all month long. Including you! So we’ll present a how-to guide for keeping comics free of women, trans, and non-binary gender fans! In case that’s helpful to you. Comics crappiest marketing gaffes will be thoroughly examined and mocked with the assistance of artist Sarah Benkin whose “bawdy, body-positive comic” Star Power is currently available on Etsy.

Our May strip will focus on the art of buying comics. We’ll include tips for retailers on attracting that elusive non-18-35 year old straight white male, plus explain comics distribution to the lay-person. We’ll also be taking a look at how marketing and distribution work together to help or hurt comics. Ladydrawer fave Melissa Mendes will be adding her awesomeness to this strip—more of her work can be purchased here, but if you haven’t read her most recent addition to “Our Fashion Year” on Truthout you’re actually missing out on an Internet sensation.

Our final strip, in June of 2014, will look at how to sell to women and trans-folk—marketing tips and ways to not be a dick while expanding your consumer base. This super-important strip will offer real actions people in all areas of comics can take to make the industry a more welcoming place for everyone. Tess Fowler will be drawing this one — you can check out her gorgeous work here.

Keep an eye out for these six nonfiction comics starting next week.

Who do I contact if I would like to submit my work to? I do a comic about life, dating and living in NYC. 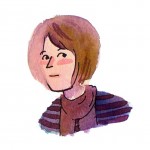 by Sarah Mirk
"Rolling Blackouts" is an intimate, illustrated look at how news is made.