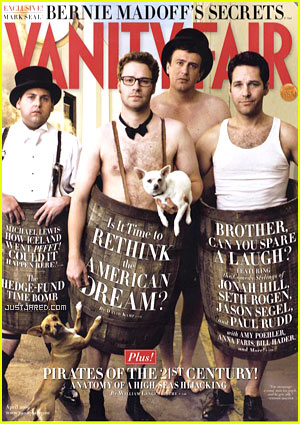 Following the release of "I Love You, Man" and the Vanity Fair cover story on "Comedy's New Legends" (read: Seth Rogen, Jason Segel, Paul Rudd, and Jonah Hill), the New York Times article on "Hollywood's New Power Posse" could predictably be about Judd Apatow and his crew of man-boys (and his wife, Leslie Mann), who are inevitably involved in every project together.
However, it appears like a "fempire" is on the rise... 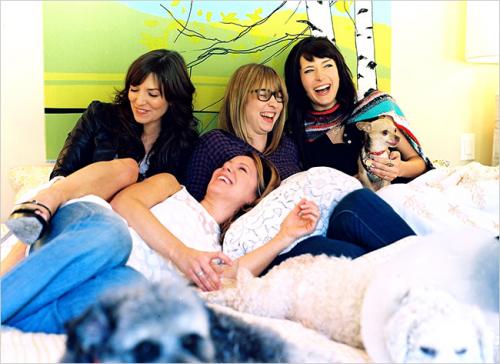 In "Hollywood's New Power Posse," writer Deborah Schoeneman focuses on the friendship between the four-way girl gang of (from left) Lorene Scafaria ("Nick & Norah's Infinite Playlist"), Dana Fox ("What Happens In Vegas"), up and comer Liz Meriwether, and Diablo Cody ("Juno" and "The United States of Tara"). While Cody has become a controversial figure even on our own website, the article brings up some excellent points.

Possibly the most uplifting aspect of this coverage is the emphasis on the supportive nature of this small, self-constructed community. Schoeneman talks about the writers accompanying each other on the red carpet (in place of publicists). Men within the industry comment on the desirability of "The Fempire" support system. Cody herself talks about the necessity of knowing other women going through the same process of unfair image-scrutiny and industry misogyny. In a culture where successful women are frequently pitted against each other, the gal-pal tone of Schoeneman's article is a refreshing change.

With a focus on their love of drinking and obscenities, it is easy to dismiss the article's reportage of the more frivolous nature of these screenwriters' lives. However, as Schoeneman argues, in a culture where "Apatown" = profitability (and, apparently, "legend" status), these women provide a much needed counterpoint. Additionally, the discussion of these women is phrased in a way to NOT position them as being exceptions (apart from stating the fact that these women face an industry where the numbers are very much against their advantage).

In a time where a bro-mantic comedy gets you number two at the box office, I am totally looking forward to the Fempire takeover.

I am so glad that some of the hardworking ladies in Hollywood are finally getting a fraction of the press that the Apatow crew gets. Let's hope this Fempire is on the rise!

The successes of these women are not necessarily representative. Check out my take <a href="http://www.campusprogress.org/opinions/3810/not-a-trend">here</a>.

I found this quote from Dana Fox kind of sad: "It's rare to find women who have that balance between work and life, who are really psyched for another woman's success. I love that about our little group."

I find myself wondering if that's really true, because it's not been my experience at all. I "flashed my fempire" on my blog today, and I'm hoping others will do it, too!

Join the Fempire takover! I "Flashed my Fempire" today, and I'm hoping others will, too!