When I was growing up, my siblings and I would visit my father every other weekend at his Oakland apartment. My parents were divorced and this was their arrangement. My mother worked tirelessly during the week to provide for us, and was often the disciplinarian as well as the nurturer. But my father had all the exciting stories, nicely pressed suits, homemade buttermilk pancakes, and halal sausages on Sunday mornings. These early memories of my mother and father were nicely mirrored in Richard Linklater’s new film, Boyhood.

Filmed over a 12-year span, the movie follows the growth and personal journey of a boy, Mason, and his family. To truly chart their physical and emotional paths, Linklater shot the film over the course of 12 years, employing the same actors for the whole shoot. Transformations happen with each scene—voices change, acne appears, weight is gained, confusion mounts, and a mother changes.

I saw my mother represented in Patricia Arquette’s character. She plays a loving single mom who goes back to college, obtains a degree, seeks out idealized romantic relationships that don’t work out, and advances in her career but still has many unanswered questions about life. The film effectively shatters the myth of the perfect mother by showing the very human emotions of frustration and fear that they experience over time. In fact, one of the film’s most evocative scenes comes when Mason prepares to move out for college. Arquette sits at the kitchen table alone and frustrated, wondering where her life went. 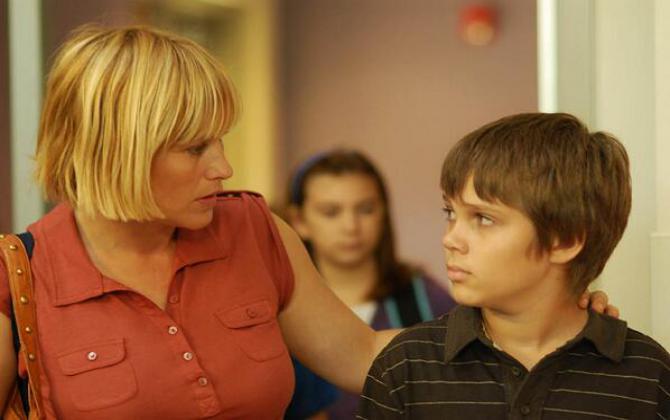 We often blame our mothers for their inability to fix things in our lives, but what happens when their lives aren’t fixed? What happens when the same amount of confusion that a teenager encounters is also experienced by their mom, but in a varying context? When I think about the struggles that my mother faced as a single parent coming home from work to three very opinionated children, I see things differently. I understand why she didn’t have the answers sometimes. When she disciplined me, I cried for my father to come get me. It was easy to associate him with fun, escape, and excitement because I didn’t see him as much. Like Ethan Hawke’s Dad character in Boyhood, our times together were punctuated by his long, animated stories of past love and life, late night TV, and food.

Watching Patricia Arquette’s physical transformation throughout the film was another fascinating element of its 12-year narrative. Her body weight fluctuates, her hair changes, and her clothes become more conservative as she settles into her job as a college professor, but the essence and vulnerability of character remains constant. Again, it was like watching my mother go from her trademark short permed haircut to natural twists, aging but retaining the youthful essence that most people associate her with. Watching the physical maturation of Arquette alongside her repeated struggles with romantic relationships was also fascinating, especially when it’s seen through the eyes of her son and daughter who reap the consequences of her choices and in some ways, end up blaming her for it.

This is another reminder of the humanity of mothers, who in many instances are still growing and learning about life when they bring lives into the world. We’d like to think otherwise, but even the people who are the most prepared for parenthood, aren’t, and that’s okay. My mother made a way for us, going from a job at a carpet store to a successful real estate agent, and we often talk about love and life on the phone as friends.  Patricia Arquette’s character grows from a young woman, not far from her teens, to a middle-aged professional in front of our eyes and much like my mom, she still has questions, frustrations, and hopes for her life.

Our parents are human too.

Nijla Mu’min is a writer and filmmaker. She writes and direct movies about black mermaids, black lesbians, black girls in-between worlds, and boys too.

This is a great article! I came across it because, since Arquette is becoming a major awards contender, I was looking for literature about this topic. The film is called Boyhood but it could easily be called Motherhood, with Olivia's arc happening off screen but coming into the center in arresting ways. Her failures, her achievements, her dreams are all as important to the story as Mason's (I feel the same way about Mason sr--the film tracks his arc just as sublimely).