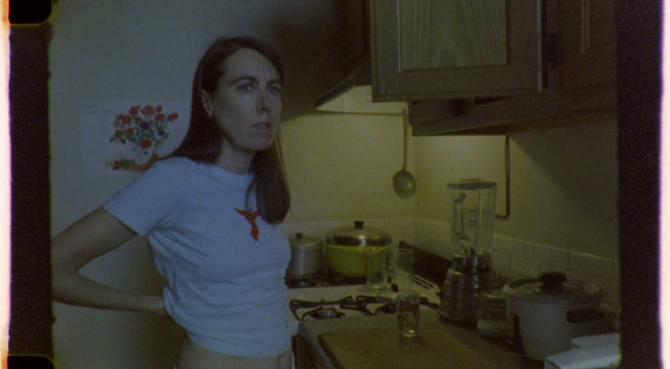 Moyra Davey in a still from her film project Notes on Blue.

Moyra Davey is a Canadian artist and writer living in New York whose work deals with daily life through photography, video, and layered textual references and associations. Notes on Blue, Davey’s most recent project, is part of The Walker Art Center’s Online Commissions series, which asked six artists to respond to the work of others within the Walker’s moving image collection.

Notes on Blue is 28-minute long “lyrical film essay” an exploration of fragmentation and primarily responds to Derek Jarman’s 1993 film, Blue, which was released shortly before his death from AIDS complications. Davey’s experience with blindness as a consequence of Multiple Sclerosis parallels Jarman’s work, serving as the jumping-off point for the film, which weaves together thoughts on blindness with reflections on the color blue and biographies of artists like Jorge Luis Borges, Sylvia Plath, Anne Sexton, and Tilda Swinton. In the film, Davey ambles around her apartment, sometimes obscured by its architecture, as she recites her frank, diaristic meditations. The film is also punctuated by dreamy clips of women at a subway station, robins’ eggs, and Davey’s dog. For both Davey and Jarman, the limits illness imposes serves as a site of production and creative promise.

In May, I had the privilege of attending Walker Art Center’s conference, Superscript: Arts Journalism and Criticism in a Digital Age, in Minneapolis and spoke with Davey about her work. Blue also happens to be the theme of Bitch’s summer print issue.

MIRIAM W. KARRAKER: Can you talk a little about how you became involved with the commission and your process in making the film? What attracted you most about Jarman’s work? Had you been thinking about Jarman for a while?

You know, I actually remember seeing Blue in New York—and Jarman was there. That was my most vivid memory of Jarman and when I got the invitation, I just dove into all of the films [in the Ruben/Bentson Collection]. His writing as well was incredible, I had never read it. I got really into his writing if not more than his films.

Is a lot of Jarman’s writing in your film?

I based some of the narration on some of the passages from his books. So yeah, some of it is in there, it’s all kind of interwoven with thoughts about writers Sylvia Plath, Anne Sexton, PJ Harvey, Fassbinder, and Borges.

Can you speak to how you select which citations to use? When you’re reading do you just accumulate these different sources and they’re in the back of your head or do you have another method?

In the case of Notes on Blue, as soon as [The Walker] asked me to do this, I immediately thought of Blue and I just quickly made this list of all the references I had, all the things that came to mind. You see a little list at the beginning of the film. I have to say, I always let accidents play a really big part in how I read and I’ll just kind of follow my nose with references. Jarman kept writing about the swallow in Beowulf and [laugh] I had never read Beowulf but it turned out my son had been reading it at that moment in high school. So I read Beowulf, looking for the swallow that Jarman mentions but I never found it, it’s not in the edition that I read but it was great that I read it nonetheless and it kind of found its way into the piece.

What’s your process for filmmaking like? I know you write, and some people are probably familiar with your edited collection, Mother Reader. Is writing part of your process?

Usually in videos or films that I make, I start with a written text and sometimes I follow it almost to the letter. A few times I’ve just had to completely abandon the writing because it just wasn’t working so I take a different tact. With Notes on Blue, I wrote something, then I started filming, and then it’s interesting you really see, when you’re reciting something to the camera, what works and what’s totally flat. So at that point I cut things, then I often get ideas for new passages, scenes I want to add. It’s very much like the ideas come out of the process.

Do you think your process has changed much throughout your career? Have you started using the internet or new media as part of your process?

It has changed. I edited that book Mother Reader in 1999—something like that—and that got me really oriented toward literature, more and more literature found its way into my work. The internet and technology makes writing so much easier. I know there are a lot of people who disparage internet research and say you have to go to people and talk to people which is of course very important. but for my purposes it’s been great, it’s just so quick, your access to information.

You’ve done some portraiture in the past, and you’ve somewhat shifted away from it over time. Is Notes on Blue a continuation of this shift?

I did portraits a long time ago, like in the eighties, and then I stopped for kind of a long time, I mean I never really did portraits again until I started working in video in 2003, and then I was using myself in the videos and so… I don’t really regard the videos as portraits or self-portraits necessarily but there is a figure [laughing] very prominent in the video. It’s an interesting question… I’ve been taking portraits of animals [laughs]. You see a dog in Notes on Blue a few times.

I’m wondering if you considered Maggie Nelson’s Bluets when you were responding to Jarman’s Blue. Do you think there’s a trend of artists meditating on blue lately?

I read Maggie’s book and it’s even in my little list at the beginning of the film. And I was thinking, when I quickly jotted down all those associations that Bluets would somehow find its way into this but I realized that Bluets is just so complete as a project and it was better for me to go to, I don’t know, maybe less unlikely sources…

Yeah, but I love that book and I just read her new book, The Argonauts, and it’s really good, it’s really great. Yves Klein blue… I don’t know if there’s a trend but there’s always been a sort of fascination with that color perhaps.

Another question that comes to mind concerns the element of storytelling, and also what some describe as a “confessional” element in your work. Do you feel that’s accurate, does that descriptor resonate with you?

I mean yeah, it probably is confessional. I definitely have that impulse but I try and mitigate it as much as I can by you know, interweaving all kinds of other stories that are not necessarily my story and giving the piece a real kind of texture of all these disparate elements and stories. My hope is that it balances out the confessional aspect of it. As Fassbinder said, the more personal you can make something, the greater will be the reach in terms of audience. People are sort of, they’re fascinated by other people’s sort of dirt, you know, gossip. That would sort of be the negative spin on it. I think what I’m trying to do is channel a confessional voice but make it have a broader resonance.

Some might say that there’s a trend in contemporary art and literature that people are trying to incorporate multiple different sources, Maggie Nelson for instance, into their art or writing kind of to stray away from the negative connotations of writing confessionally.

Have you read Karl Ove Knausgaard? The critical response is fascinating. I’ve read three of the books [there are six total] and I’ve read his essays in the New York Times. There’s been so much, in book reviews, about this trend towards the first person and this sort of memoiristic sort of writing. Knausgaard in one of his essays wrote something interesting about how he loved essays, he loved diaries, he loved first person, he loved this essayistic mode in the Montaigne, true sense of the word essay, to try. He felt he was connecting with another mind. That’s something I really relate to and I think it’s something that motivates what I do because I’m sort of trying to find the most direct means of communicating. But you know it’s a fine line, if you go too far in the direction of tell-all it becomes something that the viewer can’t take, it’s a balance  you’ve got to find.

Notes on Blue premiered at Superscript: Arts Journalism and Criticism in a Digital Age at the Walker Art Center. You can view it online until the end of June as part of the Walker Moving Image Commissions. If you’re curious about Superscript, you can check out the conference’s reader.

Miriam W. Karraker is a critic, writer, and artist living in Minneapolis.

When I was a student of the Journalism faculty, we analyzed this Jarman`s film. I good remember that all students were truly keen on his work. Now my younger brother got the same assignment in college, but he asked http://www.essaypenguins.com to write a paper for him, he thinks this film is dull.