Artists Sew a Giant Memorial for Survivors of Sexual Violence 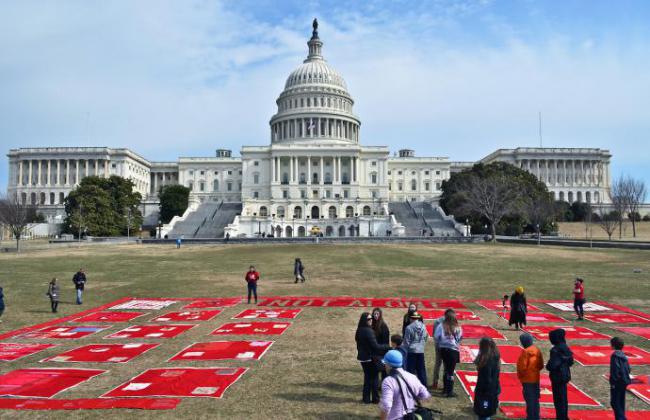 For a few hours on Saturday, March 1, 100 red quilts covered in words lay over the west lawn of the US Capitol. Together, the bright squares formed the first public display of a project called The Monument Quilt, a crowd-sourced story collection and art project about sexual violence.

“I will read, believe and be transformed by every story here,” one anonymous visitor wrote on a blank swatch of fabric. “I so badly needed an ally to be there for me when I came forward with my own story.”

Over the next two years, Baltimore-based art collective FORCE will be collecting quilt squares from survivors of rape and abuse across the country for The Monument Quilt.  In a final display, The Monument Quilt will blanket over one mile of the National Mall to spell “NOT ALONE.”  In a press release, FORCE described the quilt as “a platform to not only tell our stories, but work together to forever change how the US public responds to rape… We are creating a new culture where survivors are publicly supported, rather than publicly shamed.”

At the first public display of the quilt this month, over 300 visitors, speakers, and performers wandered among the squares, with the symbolic Capitol dome in the background.

Some squares were emblazoned with big fabric letters telling personal stories of sexual violence, others kept their stories beneath layers of fabric which you had to lift to engage with. Some quilts carried many stories, and some told just one. Visitors were there to witness and honor these stories, but were also instructed by a border around the display to take their time, do what felt right, and take care of themselves. I visited the quilt myself as a new member of the FORCE volunteer team, and had come to collect even more stories from those experiencing the quilt, like I was, in a physical space for the first time.

The Monument Quilt was inspired by a Judith Herman quote: “The most common trauma for women remains confined to the private sphere. There is no public monument to rape.”

As the quilt grows—with individuals and groups submitting their own squares from across the country—it will create a monument even larger than Herman could have envisioned: one that encompasses survivors regardless of gender or experience, and regardless of where they’re at in their healing processes.

Rebecca Nagle and Hannah Brancato, co-founders of FORCE, told me that The Monument Quilt has two distinct missions, both borne out of a need for a public space devoted to survivors of sexual violence. One goal is the creation of a space where people from all walks of life can learn about rape and sexual abuse and commit to ending our country’s legacy of sexual violence. “We were thinking about how many other trauma and tragedies in our culture have space, symbols and rituals through which people can gather, support one another, grieve and process; we also think that these monuments, museums and memorials are important spaces to learn from history, so that an injustices do not repeat,” Nagle said. “This process has not happened with sexual violence.”

The other critical piece of the project is to create a public space that can help survivors heal. What sets The Monument Quilt apart from any other public spaces devoted to rape and stories of sexual violence is that the survivors are in control of the conversation, the environment, and, ultimately, the display’s message.

“The quilt is a space where the experiences of survivors comes first,” Brancato told me. “It is a space for and by survivors. This is different than a space, even, where survivors share their stories to raise awareness. In those spaces—which are important and totally valid—survivors are educating the public. I think the space of the quilt is unique in that the public is there to support survivors.” 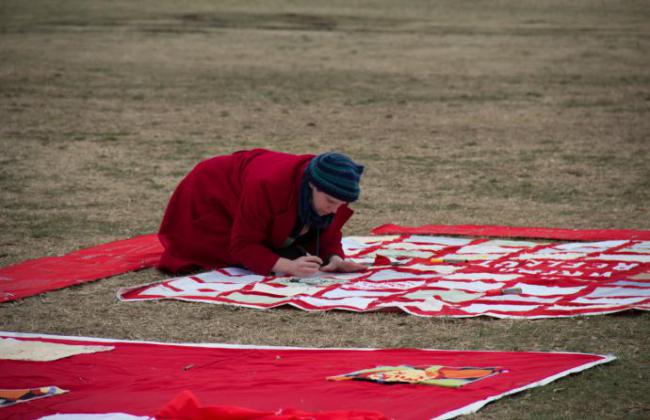 The Monument Quilt is a swirl of many important parts of healing from the trauma of sexual violence, a testament to the complexity and diversity of experiences which are encompassed by the label of “survivor.” Walking through the quilt felt overpowering and uplifting, it felt like being in the middle of a movement. The large squares carried entire experiences with authority; No story was rendered invisible, or put up for public scrutiny, or open to debate. As hard as it was for me to navigate among the squares, to skip even one story in a viewing felt like an injustice. Regardless of why people end up at the quilt, I personally left feeling like I had been trusted with something huge—I was motivated to make sure these stories become less frequent, less normal, less common, less familiar.

“I wasn’t sure what to expect the quilt display to feel like in a physical space,” Melanie, a survivor, told me after her visit. “The feelings I had about the display were mixed, because it was definitely triggering, but I felt so much gratitude the whole time I was there.” She like the DIY elements of the display, like entire quilt squares covered in small pieces of blank fabric with markers and signs encouraging people to share their emotions and their stories. “The quilt is truly a collective, community effort.  Rape affects everyone, and everyone can contribute to the project.”

FORCE volunteer Gretchen Tome also felt the DIY squares drove home the overall mission of the quilt. “I liked the addition of spaces to write reflections and the boundary around the display,” Tome told me. “I was really touched and teared up reading them, especially because it meant someone was moved in that moment to share something so private in a public place. I thought: that’s what this is all about.”

The pieces of the quilt displayed this month were only a portion of the full collection, but even within the small sampling they include a variety of experiences, of voices, and of perspectives. Some squares came from people who seemed only to have just begun the journey toward healing, and some seemed further along. The honesty of each square was remarkable and illustrated the idea that everyone’s healing process will be different, that how people used this quilt and what they needed from it will be different, but that we are all still able to support one another. “Please don’t tell me it didn’t happen or that I should be over it by now,” one read. Another quoted the Bible: “They are extinguished.  I am about to do a new thing.” 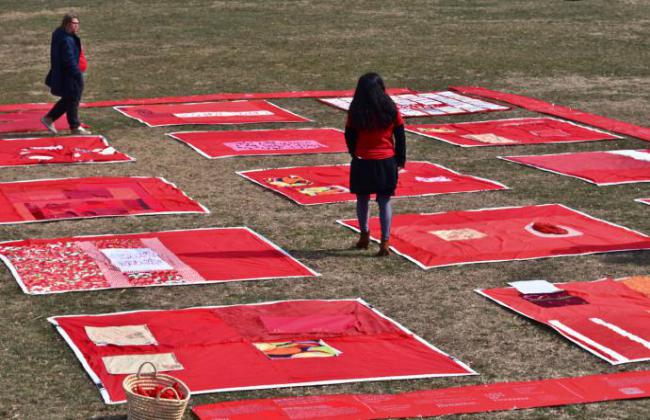 For survivors, the small glimpses into these experiences are meant to provide validation and a sense of compassion that is often denied to them by the media, their community members, and even the justice system. Each story is a reminder that they are not alone. For folks who feel like they’ve been rendered invisible by dominant narratives about sexual violence and the endless victim-blaming, slut-shaming, and rape apology present within our culture, the quilt is an embodiment of the will to overcome stigma and find support and recognition.

“I was overwhelmed with a sense of gratitude that FORCE started this project, because it means that my experience matters,” said Melanie. “It means that what happened to me and others like me shouldn’t be kept hush-hush and shouldn’t be ignored because it’s part of a larger system of gender-based violence.  Until now, no one has prioritized survivors of rape enough to create a public space for us to heal, be safe and for others to reflect on its place in our society.”

Another survivor who came out to the display, Mary, echoed Melanie’s experience with her own. “What really stuck out to me was that for the first time in my entire life, as a survivor, I was in a public space where it was safe to be open and honest about what happened to me,” she told me. “I left feeling safe.”

These reactions are a reminder of how important it is to create safe spaces for survivors and their allies—and why we need to have them be a permanent reality.

“The vision of The Monument Quilt is huge,” said organizer Brancato. “The only thing bigger is the need.”

Carmen Rios is a writer and activist from Washington, DC who has been working under-the-table and professionally in feminism since 2009. She recently began volunteering with FORCE. Photos courtesy of FORCE.

Related Reading: We Need a National Monument to Survivors of Sexual Assault. 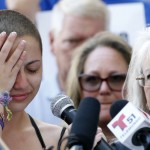