My favorite songs released this August are tinged with the mellow, warm sounds of summer. They make me want to roll down the windows and enjoy the last set of tunes before scarf-weather settles in.

As a songwriter, Neko Case has always seemed to lack a brain-to-mouth filter; she’s relentlessly honest, and strange, and true to herself. The mainstream popularity of her music, particularly 2009’s Middle Cyclone, has been hard-earned, but feels (happily) incidental. She’d be writing these songs no matter who was listening. Lucky for us, EVERYONE is listening. The Worse Things Get… was announced in tandem with the release of its first single, the rollicking, gender-fucking “Man,” which critics tripped over themselves to adore. Case has never sounded more urgent, and she’s never rocked harder. Her determination to assert her lens on the world is radical in its urgency is particularly acute on the completely radio-unfriendly “Nearly Midnight, Honolulu,” an uncomfortably personal, but necessary, missive to a survivor of child abuse. Overshares are part and parcel to a Neko Case record, which is how she’s built a fan base that trusts her implicitly. This new record is all about letting listeners in deeper, showing them more. The last 30 minutes of Middle Cyclone was an ambient recording of the woods around Case’s Vermont farmhouse. The last five seconds of The Worse Things Get… is one of Case’s cats meowing into a microphone. The metaphor is remarkable: We’ve been invited in from outside.

The Worse Things Get… is available September 3.

Ebony Bones, “I See, I Say” off Behold, A Pale Horse

Ebony Bones is a game-changer. Her flamboyant, genre-exploding music can only be experienced at a screaming run; even if you sit still to listen, you’ll travel. As if her throaty, arresting voice weren’t enough, she’s her own producer, too. Behold, A Pale Horse is downright exciting to listen to. Every sample, every sound used in this busy, funky collection is surprising, and more masterful for knowing Ebony Bones was in charge of all of it. If you’re not too busy dancing, listen to her lyrics, which are heavier than they seem, and if you’re spending all your time listening to the lyrics, get up and dance. This record doesn’t stay in one place, and its audience likely won’t either.

I SEE, I SAY by Ebony Bones

This summer was dominated by royals. For some, it was a pretty British couple who had an intimidatingly named baby. For me, it was a song by a 16-year-old New Zealander with no ties to the throne. While my compulsive listening may have surpassed the norm, I certainly wasn’t alone in naming “Royals” the jam of the summer—two weeks ago, Lorde became the first woman in 17 years to top the Billboard Alternative Radio Chart. Her first full-length record comes out at the end of September, she’s selling out every show she’s booking stateside, and I continue to hope dearly that Kate Middleton locks herself in her extremely well-stocked closet sometimes and puts this song on her headphones.

Oakland duo Steel Cranes provides exactly the right kind of heavy, noisy rock for the dying days of summer. They shred, but they’re not frantic. Their sound lacks any pretense whatsoever, offering raw, relentless power instead. Of “Boat Song,” the first single from the band’s forthcoming debut album, drummer Amanda Schukle has this to say: “We recorded it in one take. It’s a bit of controlled chaos, like being just on the verge of falling over a cliff, but pulling back at the last minute.” My hope for Steel Cranes is that, no matter how famous they’re about to be, they don’t lose the sense of loud, gritty fun in which their first few singles are drenched.

You can find Ouroboros on bandcamp on September 24.

Remember when “Grown Woman” leaked a few weeks ago and then disappeared after like three days and then this awesome remix got released instead? Me too.

MEN, “All the Way Thru” off Labor

MEN have been favorites around the Bitch office for years, so our delight upon hearing the Brooklyn electro-pop trio will release a new album in the fall was about as impossible to contain as the energy in any of MEN’s songs. Former Le Tigre member JD Samson is the band’s irresistible frontperson, backed by Tami Hart and Michael O’Neil, and together the trio make music and performance art that expand discussions of gender, identity, sexuality IN ADDITION TO making us dance. Your move, Top 40.

All The Way Thru by JD Samson & MEN

Labor will be released this fall.

Portland’s 12-17 member band Typhoon is taking flight. Each of their albums find the group tighter, more technically skilled, and more complex as songwriters. This summer’s White Lighter, which I think will be the album that delivers them to the world on a silver platter, finds Typhoon waxing hipster poetic (I mean that as a compliment—the band knows its way around a sublimely twee harmony) about what it means to grow up and examine the lives of our parents as peers. Songwriter Kyle Morton has the weight of the world on his twentysomething shoulders, and he’s developing into a master of expressing his generation’s particular simpler-time nostalgia and wariness of the future. 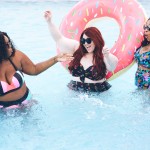 by Evette Dionne
Summer's in full swing, and so too are pool parties.