The Kill Rock Stars show was great! The floor was full from noon o’clock on, when Portland locals Explode into Colors hit the stage. This three piece trio wowed the crowd outside their Pacific Northwest with Klaudia’s vocals and the awesome drumming from Lisa and Heather. The Paper Chase, Horsefeathers, Thao Nguyen and the Get Down Stay Down, Marnie Stern, and the Thermals followed! The Bitch table was awesome, it was great to see the support form readers and interest from curious concert-goers struck by our handmade, swear-word of a banner. We had contributors such as Amanda Marcotte, Dakota Kim, and Erica Lies stop by, our interim editor Jonanna Widner, and SXSW performer Thao Nguyen! She is not only a huge Bitch supporter, but super nice and we tried to not to geek out in front of her. But most importantly, it was awesome to see the fans come out and decline filling out a raffle ticket because they already subscribe, or refuse to take a free issue and insist on paying, or just donating a buck or two. The love poured down and seared our hearts like the sun seared our skin (the sun has maybe gotten to my writing skills…) More updates to come, but they may be few and far between given our lack of internet…but stay tuned! I'm green with envy! Glad to get an update though. Keep havin' fun.

Thanks for the update. And at the risk of getting all Mama Bear on you three -- don't forget to reapply your sunscreen every two hours! (It's SPF 50, right?)

Nice! I'm so stoked to see you guys basking in the rays in TX, and glad that the peeps are enjoying the Bitch table! I second the call out for sunscreen, though. Do it! And have FUN!

We love you Bitch! It's great to put faces to the names and you put on a rockin show. The Thermals were amazing. The Bitch Coloring Book is bringing out my inner kid. 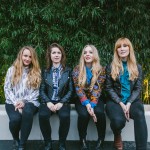 by Evette Dionne
The United Kingdom-based rock quartet is using their music to call attention to the ways the music business mistreats women.