Sometimes part of what makes a musician so compelling is the story behind them. Were the White Stripes married, or brother and sister? Would Sid have been the character he was without Nancy? Is the girl in the “Cry Me a River” video REALLY supposed to be Britney Spears? (I have strong feelings about this one because I was young and impressionable when Britters and Justin dated and broke up. But that’s another post entirely.)

The same is true of Abigail Washburn. Her music is outstanding on its own, but the road she took to fame is too serendipitous not to share. In the mid-90s, Washburn visited China for the first time (after being the first person at Colorado College to major in East Asian Studies) and decided to study law there. When she returned stateside, she took her newly purchased banjo on the road for a goodbye trip down the east coast. In one of those magical not-famous BAM! famous turns, she studied banjo in West Virginia and made it to Kentucky for a bluegrass convention, where she was busking with a group of musicians and got offered a record deal on the spot. Listen to her voice and you might understand why:

So now she’s, as she puts it, “living a life of music.” Her debut album came out in 2005, which introduced the music world to her Appalachia-via-Beijing musical arrangements, and to that stunning voice. She writes and sings in both Chinese and English, and learned veritable mountain music in both countries. The United States government asked her to tour Tibet in 2006, making her band the first American one to do so. She also played the Beijing Olympics in 2008. I can’t think of any musician I would rather have represent the US in China right now than her. Washburn has dedicated her life to the study of two things: China and the banjo. In a world of collapsed boundaries and borders, it’s more than refreshing to have Americans abroad who are interested in learning from the places they visit on an intimate level. (More intimate, that is, than going to the “hole-in-the-wall” restaurant Lonely Planet tells us to “discover.”) Washburn volunteered in Sichuan province after the 2008 earthquake there, and released an EP recorded mainly in the disaster zone. Hers is not a Bono-sized voice yet in the global musician-who-cares model, but I prefer it that way. Her work is thoughtful and beautiful, and she lets the music speak for itself, wherever it’s from.

Her latest album, City of Refuge, came out in January of this year, and she’s currently on tour in support of it. So, quick! Better get to lovin’ her now!

Thank you, Katie, for writing an article on Abigail. I just discovered her music on youtube (Abigail and the quartet) and am completely blown away by the music's genius and beauty.

So glad to hear she's made an impact on you! Enjoy, enjoy, enjoy!! 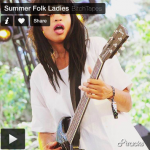 by Sarah Mirk
This week's mix highlights women who are playing at Pickathon music fest.