I’ll be the first to admit that when Willow Smith’s “Whip My Hair” hit the airwaves I was immediately in enthusiastic support. Besides just being attracted to songs that tell you how to dance to them (takes so much of the pressure off, doesn’t it?), I just can’t resist the carefully manufactured appeal of this Top 40 hit. Something about Willow’s hypnotizing chant, the colorful video, the frivolity of the lyrics, and the allusion to DEVO entertained me so much that I was able, for a long time, to overlook the question of, “Can I really whip my hair back and forth?”

In Willow’s defense, she tries to be inclusive, emphasizing that it “don’t matter if it’s long or short” all you have to do is “do it, do it whip your hair.” But the stark truth is, I can’t really whip my hair back and forth; it sort of just goes along with my head which then renders my attempts at hair-whipping mere glorified headbanging. Of course, I am hardly alone in this reality, especially as more and more black women are opting out of the harmful relaxers that have become so normalized in our culture. That’s why I was so happy to come across Les Nubians’s first single “Afrodance” off of their new album Nü Revolution.

Markedly less uptempo than Willow Smith’s hair anthem, “Afrodance” goes for a more low-key funky—yet still danceable—vibe that will appeal to that set that was turned off by the mania of “Whip My Hair.” Why my persistent comparison of these two such musically divergent songs? Because they both are hair anthems by brown ladies, a rich musical tradition that includes… just those two songs. The closest thing that comes to mind is India Arie’s “I Am Not My Hair”, almost anti-hair anthem in its stance. Now don’t get me wrong, I agree with the message of “I Am Not My Hair,” but I think “Afrodance” offers a valuable addendum. You shouldn’t let your hair define you, but it’s also great to love what you’ve got. Yes, “Afrodance” is a celebration of afros, but the song is inclusive in its simple request that you “do the afrodance.” What’s the afrodance? I have no flippin’ idea! But I think if you’re just up and dancing, you’re probably doing it right, which is awesome. Do your afrodance.

<p>... for the rest of the week and into the weekend. Nice! Looks like Les Nubians has been around for a while, but they're new to me. From the few samples I've heard, the rest of their new album is less-funky? Remember, Soho and <a class="imgcaptions" title="Hippiechick, Soho, 1990" href="http://www.youtube.com/watch?v=ILaTgQBKRbE" target="_blank"><em>Hippiechick</em></a> (I heart that song)? The spirit of these gals reminds me of the spirit of those gals. Thanks Ann for the intro!</p>

I'll really happy to see this! When "Whip your hair" came out, I was rocking the afro to grow my hair out for dreads. I really wasn't whippin anything but whiplash. A lot of African american girls hate their nappy hair and would prefer for a more europeanized look, either with weave or relaxer. From a young age we are shown what good hair is( long, sparkle, and on top of white girls' heads) and never embrace what we are given. I think that more African american medias should celebrate our truly one of a kind hair instead of find ways to change, hide, or mask it. The Afro hair movement is growing today and i think Les Nubian has helped bring it to more people's attention. Do that AFRODANCE!! 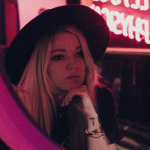