Does anyone else organize their iTunes by season? Singer-songwriter Anaïs Mitchell is the artist that got me started doing it, as no single album reminds me more of summer than her 2010 folk opera Hadestown. It’s drenched in sunlight, warm voices, young love, and, as Kristin mentioned in her Preacher’s Daughter series, a feminist perspective on Greek tragedy. Her latest album, Young Man in America, is spring; all births and unfoldings and discoveries, and an occasional dip back into winter dark. Point being, Mitchell is a songwriter for all seasons, one of young American folk music’s best, and she’s getting better and better. I first heard Mitchell’s music when NPR featured a song from Hadestown on its “Song of the Day” newsletter, except the song was one sung by Justin Vernon (NPR darling, deservedly so), not Mitchell. I bought the album, intrigued as I was by the idea of a folk opera interpreting the story of Eurydice (sung by Mitchell), Orpheus (Vernon), Persephone (Ani DiFranco), and Hades (Greg Brown), and can’t overstate how convinced I am it’s a flawless record. The characters are real, the playing is masterful, the roles are pitch-perfectly cast, the storytelling is poetic and as multi-faceted as storytelling gets. “They say if you want to be a poet nowadays, you better learn to play guitar, because there’s not much work for you otherwise,” Mitchell told NPR in 2010. “Learning to write songs was a way of being a writer and being able to be heard.” As with Ani DiFranco, whose Righteous Babe Records released Hadestown, Mitchell’s roots in poetry result in songs that are so full of meaning and plot they’re basically incomparable to most popular music. You could teach Anaïs Mitchell lyrics as a text and fill at least a semester. Young Man in America, released February 28th in the U.S. by Wilderland Records, follows in the lofty narrative steps of Hadestown.

In a guest post for American Songwriter, Mitchell had this to say about starting to work with the character of the eponymous Young Man:

I felt like with the title track here was this mythological character, this desperately desirous sad young man, and he was like a totem pole, made up of many spirits, his clothes were woven through with all different feathers and furs… prairie dog, raven, hurricane, sword and shield, wind, canyon… I went through all different words and images until the right ones incorporated themselves, the ones that had a chemistry with each other.

Mitchell’s website describes the album as “about American Manhood, British ballads, and [Mitchell’s] father.” It’s relatively rare to hear a woman write and sing in the (male) first-person, while men are constantly writing songs postulating about the female experience (the entire catalogues of Train and Maroon 5 come especially to mind…). Would that most artists were as thoughtful as Mitchell when they went about it. Young Man is an androcentric narrative, but women abound. The narrator aches for the safety of his mother, then revels in his love of a woman, then returns home for the reckoning at the end of his father’s and mother’s lives. Interspersed through this central plot construction are songs ostensibly from the point of view of the mother and then the lover, that further explore relationships with the Young Man. In other words, Mitchell explores American masculinity from several angles; again, a consideration often denied female characters of male design. (For example, “Drops of Jupiter” always struck me first as entirely condescending, and second, as a song poorly masking the opportunity to say “soy latte” in a song, not actually empathize with women.)

Such thoughtfulness is what I love most about Anaïs Mitchell songs. She’s been steeped in the tradition of folk storytelling, clearly, but her turns of phrase and her acute eye for human drama are patentable. I hope she continues with these theatrical albums in the future, after two such gorgeous offerings to the genre. She’s telling stories we didn’t even know we were missing.

Previously: Two Feminist Music Projects to Get Behind

Thanks for posting this! I'd never heard of Hadestown before, and it's fantastic. 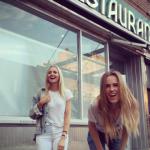