Did anyone catch Björk’s appearance on Stephen Colbert last week? Backed by not only a drummer and a choir of bedazzled women, but also a reed-thin man wielding four iPads, Björk belted out one of the lead single from Biophilia, “Cosmogony.” Björk trades exclusively in weird, constantly redefining herself in ways that challenge conceptions of women in music. I love Björk for shaking off any definitions people have applied to her, so let’s cruise through a short “greatest hits” list of classic Björk moments that have helped shape her nebulous character.

First, check out her performance of “Cosmogony” on the Colbert Report. She picked up some of the unnerving backing harmonies from her time with David Longstreth & co. working on Mt. Wittenberg Orca, and my god, look at that hair. You should also read our former editorial intern Nicole’s post about some of the accessibility issues involved with Björk’s iPad app.

Björk works to break down sexual stereotypes in her work. Sexuality appears, but at a distance from the direct representations of sexuality in most modern pop music. If anything, Björk doesn’t even let rock stereotypes enter the discussion, like in this interview where she opens up a TV and explains her vision of what goes on inside the black box.

Even when Björk tackled the blah genre of the love song, she did so in atypical, oblique fashion. Her first big hit, “Birthday” (lyrics here) with her old band the Sugarcubes, dealt with perhaps the most extreme May-December affection this side of Kiss’ “Going Blind.” The song has undeniable pop accessibility, discomforting subject aside (the specifics of the relationship in question are thankfully left pretty vague), but Björk importantly steers the song away from the discussions of the body most rock love songs embrace.

If anything, Björk uses strangeness to allow discussions of common rock subjects with new context. We can celebrate Björk for allowing new conceptions of women in music, and for finding a fresh, new way to cover the subjects of love and sexuality. While she’s publicly shied away from feminism, Björk has spoken against gender discrimination in music—check out Alex Vesey’s post on her feminist relationship with Björk. You can hear more of Björk’s new album here on her website. As always, stay strange, Björk.

I loved her on Colbert! It was so refreshing and validating to see here there. 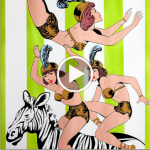