Crystalline is Björk’s first single off of Biophilia, her forthcoming seventh studio album (excluding Selmasongs) slated for US release on September 27. And, it’s a mighty big project. Got Apps? Björk does—she’s launching several apps to accompany her new album—and I guess I’ll have to finally crack my piggybank and buy a tablet-thingy (which, in my non-techy opinion, should have been called an iLet).

I bought Crystalline for $1.29 on iTunes a day after it was available for free download (go figure). And, the five-minute track goes something like this…

Galactic bass beats build a backbone—in and out, out and in—between the Gameleste and Björk’s unworldly timbre after a minute. And, she sing-talks with the Gameleste for the next two minutes about warmth and love and chisel quartz to reach love and nebulas beget light beget sonic branches. Then the galactic beats disappear and reinvent themselves into supernova (with a pinch of Aphex Twin electronics)—sonic BOOM! rat-a-tat repeat [is the CD-skipping? No, it’s just the song] Laser-gun pew-pew-pew Sonic Boom! Rat-at-tat-tat-tat Boom! at around the 4 minute mark and drowns out it’s the sparkle you become, conquer anxiety, sparkle you become, conquer anxiety.

I wish to sparkle too, Björk. But, it appears as though I’m going to need a tablet-thingy to shine… Sheesh! As for Biophilia, its 10 tracks can be heard via CD and MP3 formats, but are allegedly better experienced through touch-screen technology. Here’s a sneak peek of the Crystalline app (this is way cool in concept, but not so much for people like me without the medium, or the funds to secure one). But not all hope is lost. According to Jason Lipshutz, “Bjork: The Billboard Cover Story,”

Biophilia will exist as a gargantuan live show that features one-of-a-kind instruments, an education program that teaches abstract musicology to kids, a 90-minute documentary that captures the making of the project and a relaunched website.

Which by the way, web visitors need to have the latest computer operating systems to access—I don’t know about you, but I don’t. Instead I see a desolate screen with the Biophilia compass symbol in the middle (which happens to be the album cover art too), the extent of which I can make dance around with my mouse. Perhaps you’ll have better luck on the site.

Björk is likely packing up her bags right now after a three-week residence at Manchester International Festival. She performed Biophilia, and, according to some attendees’ reactions, simulated a live art installation on recurring nights at the MIF. An Icelandic choir, unconventional instruments like Tesla coils (!) and 10-foot pendulum harps, and David Attenborough nature films were featured. To Ruth Rosselson (The F-Word), who scored a ticket to the world premiere, however, there was an overall performer audience disconnect.

Hopefully there won’t be disconnect at Björk-school. According to the Guardian, Björk plans on setting up shop and residence in seven more cities through 2014 and teaching kids how to make music on their tablets:

Kids will be able to try out the instruments on the iPad and write songs and take them home.

Cool! But I’m not a kid and the only thing I’ll be making is a comfy spot on the sofa to watch her latest music video. Crystalline, directed by long-time collaborator and not-yet-owner of an iPad, Michel Gondry, should be a fresh of breath air for fans who enjoy their technology in moderation. Check out the video, which came out today: Biophilia hasn’t even been released, but I can’t help but think how Björk, gravity-defying guru of all things music with the heavy headgear to match, will top this latest project. Gondry, had an idea, though:

Right now I want to try and convince her to do the score of my next movie, it would be nice to do it the other way around.

By then I should have a enough money saved for a tablet-thingy (or will have learned the secret to growing crystals under my feet to auction off on eBay).

Aside from the tech-accessibility hiccups… sigh, I can still transport myself to Björk’s newly unveiled martian land courtesy of YouTube.

Previously: Autry!, The Warpaint Honeymoon is Over

I really like the video. It was colorful and weird, which is what probably made it stand out so much.

musically this is pretty flaccid. she's so auto-pilot these days. it's not that the track doesn't sound good. it's just that her vocals, melodies, song structure are so predictable at this point. for someone who is so revered for her imagination and creativity, you'd think she'd try some different intervals at least, or get away from the verse-chorus thing. perhaps the song and album should be titled 'Formulaic'.

... 'Formulaic' does have forthcoming album title potential, but even that in itself is predictable - it's a one-word title; but, I get and appreciate your point, especially your mention of "auto-pilot" since fans and the industry come have come to expect Björk to well, sound like Björk. So, perhaps a venture into rap would break Björk's music mold and shake things up for everybody? Scratch that. How about Björk does Bossa Nova? It's gotta nice ring to it, doesn't it? Thanks for reading + commenting. Best! 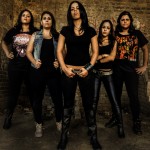 by Katie Presley
This week, two artists that aren't afraid of the dark.