Top 40 music seems to be undergoing a sea change lately. Cher has a feminist song on the radio and in the club. Neko Case is taking gender identity straight to task. Frank Ocean and Macklemore are topping the charts with songs that carve space for queer-friendly voices in the machismo-drenched worlds of R&B and hip-hop. Ann Powers at NPR declared 2013 “Country Music's Year of the Woman,” and Jewly Hight at the Nashville Scene pointed out a similar trend last year, of female artists whose sounds still fit the country genre, but whose lyrics and personae push the boundaries of country femininity.

All of this points to something big: It's been a good year for not only women in music, but feminism in music.

None of the women listed below are Top 40 fodder, but their recent releases are part of this same trend.  Here are five recent releases from one of hopefully many Years of the Woman to come.

All of the press I've read surrounding Missouri-based fiddler Betse Ellis's latest solo release uses some form of the words “kickass or “badass.” I think those words are a little redundant, but what folks probably mean when they say “kickass” is “plays the shit out of her instrument.” And that would be correct.  Ellis plays an intense, visceral fiddle in the rural Ozark style, at stark odds with her classical training. And she plays it very compellingly. Her singing voice even sounds like a fiddle on her cover of The Clash's “Straight to Hell.” Here she is playing “Straight to Hell” solo on St. Louis's KDHX:

Yes, that Paula Cole. After one album's worth of mega-90s stardom, plus the third-ever Grammy nomination for a woman “Producer of the Year” in 1997, Cole dropped out of the mainstream to raise her daughter and release several albums to less fanfare (and pressure). Not that the industry seemed to understand to her all that much when she was ubiquitous; she famously sang about gender double standards (“Where Have All the Cowboys Gone”), almost just-as-famously didn't shave, and called herself the “most raging feminist of the whole [Lilith Fair] bunch” in 1998, when Girl PowerTM was the way much of America thought about gender politics. Cole's latest release, funded by Kickstarter and released independently, finds Cole singing frankly feminist songs about women accepting themselves (“Strong, Beautiful Woman”), lady-centric eroticism (“Secretary”), and struggling in the domestic sphere (“Life Goes On”). Her voice is stronger now than it was in the 90s (“Manitoba” is a vocal highlight), and she sounds like a musician in control of her message, her voice, and her career. Here's the video for the first single, “Eloise.”

It's not especially easy, or even really advisable, to write songs from the perspective of a gender other than yours. Results usually vary from appropriation to condescension; only rarely does an artist find the sweet spot of conjecture and compassion needed to gender bend. Anaïs Mitchell did a gorgeous job last year with Young Man in America, and singer/songwriter Patty Griffin joins the light side with her June release American Kid. Like Mitchell's eponymous Young Man, Griffin's Kid chartacter is centered on her father (the album was written as he was dying), and explores the secret worlds of his mind as both told in stories and imagined from photographs. Griffin's music has always been hard to categorize (Americana/folk/country/gospel is a small sampling), but has never been anything less than stellar in any genre. Her father's tumultuous life story sounds exactly right sung in his daughter's stark, room-silencing voice. My Album of the Year already. Calling it. See the video for the record's first single, “Ohio,” a duet with Robert Plant, below:

Every Dessa album is different, but the Minneapolis rapper, writer, poet, and spoken word artist's vision has never changed. Her second full-length album was an orchestral re-imagining of her production-heavy first, and her third album—last month's Parts of Speech—was previewed on her second. Parts of Speech finds Dessa singing as much as she raps, which gives her music warmth and smoothness that didn't exist in her earlier collaborations with Doomtree, the underground hip-hop collective where she got her start. Her lyrics deal with the same themes as most hip-hop: anger, sadness, ambition, love, lust—LIFE, in other words—but she completely avoids devolving into superficiality or obscenity to make her points. Hip-hop always needs whatever Dessa says next. Here's the video for “Call Off Your Ghost”:

“Haunting” is a word often used to describe music, and it works for Portland multi-instrumentalist Scout Niblett. But a better one would be haunted. Her guitar and drum playing are cavernous, and instead of being filled by her gripping vocals, the open space they create is amplified. The songs on “It's Up to Emma” are drenched in regret, anger, memory, and general gravitas. Her cover of TLC's “No Scrubs” cuts out the original's humor and instead injects it with gravelly dismissal. Below is the video for the final song on the disc, the violent, unnerving revenge narrative “Gun.”

What new releases have you been listening to lately? Let us know in the comments!

Listen to OVER 100 Bitch-made mixtapes of great artists and tunes at 8 Track's BitchTapes.

Her new album was released earlier this week, and the songs are all so empowering and feminist-friendly, it makes me want to weep tears of joy every time I listen to it. Which is awkward because I went so far as to buy a physical copy of the album to play in the car and now everyone's probably wondering why I'm always crying happily while driving. But I digress...

Great recommendation, thanks! I'm fully prepared to be convinced about Sara Bareilles.

I suppose "She" is the most obvious feminist track, but her voice throughout all the songs is very self-determined and strong. I'm also super super super excited for Janelle Monae's new upcoming release. Q.U.E.E.N. and Dance Apocalyptic were both rad.

Word. I found Mvula's actual *music* a little boring when I first heard it, but this rec makes it worth my while to re-visit and listen to the lyrics more closely.

Holy cow you posted Dessa! I did a little squee of joy there.

As a Minneapolis girl, I have been crazy about her for some time now. She is AMAZING. Be sure to also check out <i>A Badly Broken Code</i>. I think it's actually even better than <i>Parts of Speech</i>, which is really saying something, considering how incredible her latest album is.

I basically exist in a world in which I'm sure Dessa is mega-famous and popular, and have extreme cognitive dissonance when I realize how many people don't know who she is.

Thanks, Jsloth, for your excellent recommendations in Janelle Monae and Laura Mvula. I've fallen for them both today! This list was missing some awesome women of colour.

Wow, thanks for the list. After being deluged with rape-y tunes for most of this year, this list is refreshing. The artists I've liked in the past---meh---but the intro to Betse Ellis---flippin' 'eck, she's amazing.

Patty Griffin's "Ohio" is an awesome recommendation! I can't stop the re-play loop with this one.... Thanks.

the underground hip-hop collective where she got her start. Her lyrics deal with the same themes as most hip-hop.http://www.snapbackhats2014.com 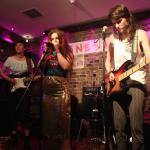