Iceland has been called the most female-friendly country in the world, and Scandinavia is world-renowned for producing perfect pop acts, so it was only a matter of time before my obsession radar brought me to female Icelandic musicians. Here are a very few of my favorites, some new to me (Ólöf) and some newly re-visited (Björk, dear Björk). I’m not even going to try to top this description of Ólöf’s voice, found on her Myspace page:

“A voice of instantly captivating, spring water chasteness possessed of a magical, otherworldly quality that is simultaneously innocent yet ancient (“somewhere between a child and an old woman” according to no less an authority than Björk).”

I was introduced to Ólöf by NPR’s series of “Tiny Desk Concerts,” and you probably could have thrown something at me while I was watching without making me blink. Her voice is stunning, and I could listen to Icelandic spoken all day, but what really stopped me in my tracks were her lyrics. From “Surrender” (note: the video is pretty sexy, potentially NSFW): “I surrender now/ I stand up now/ I open to only you, now/ I choose now/ I refuse now/ I ignore you now/ Claim my power/ I carry you…”

The combination of her haunting, lilting delivery and her simultaneously vulnerable and assertive lyrics is unique, and to my ears, endlessly compelling. Ólöf has been making music in Iceland for more than a decade, and her new album Innundir Skinni is her first to include English-language tracks. Although, really, I’d listen to her sing in any language. Emiliana Torrini’s voice is less folksy than Ólöf’s, and her songs are laced with more synthesizers and trappings of electro-pop (pop-tronica?), but the effect is similarly gorgeous. Emiliana also writes unnerving lyrics and produces occasionally dark videos to match. Except for her song “Jungle Drum,” which was used in this adorable video advertising Iceland, which is the opposite of dark and unnerving:

She also has a new album, called Rarities, which came out this summer. Once again, there is no better way to sum up Björk (who has a new song out this week!), I think, than to quote someone else:

That was Kanye West to Vibe magazine in February. Now. If Kanye West says you can be naked and get away with it and he can’t, you’re probably doing something right. Björk has built her career on envelope-pushing, certainly. Her image and music make words like “creative” and “unusual” seem like understatements. Her costumes have opened Olympics ceremonies, and she is dedicated to social and political justice in many forms. Not many people can make Kanye West look like a rookie anymore, but Björk does it effortlessly. She makes weird look cool. And you know what’s cooler than being cool? Ice…land!

Check out Mum, too! (There's an accent mark over the u, but I forgot how to make that happen.)

if you're feeling a little more raucous check out mammút 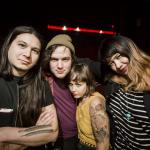 by Sarah Mirk
The "casual rock-and-roll band" is on a new album that's being given away for free.